Our local whiskey distillers are supplying an ever-expanding shelf bursting with intriguing choices. To start your sipping, here are five new-ish highlights covering a range of tastes. The best experience is to try these at the distilleries 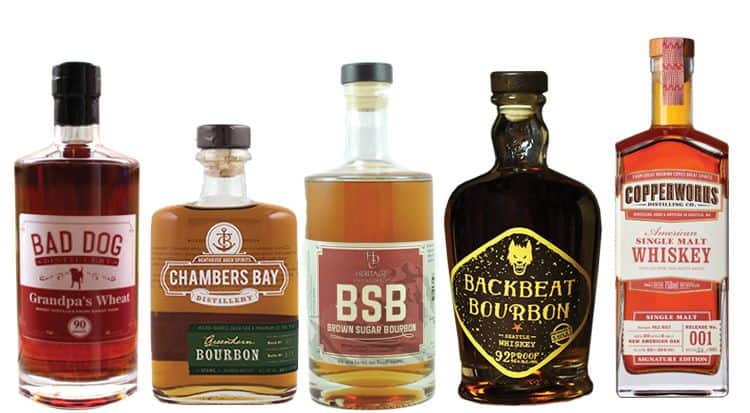 Made from 100 percent pale malted barley, twice distilled in stills handmade in Scotland, and aged in charred new American oak barrels for 30 months, SoDo-based Copperworks’ inaugural whiskey is an impressive tipple. Citrus and honey with just a smidge of grass and grain on the nose and initial taste, this single malt finishes with pepper, oak and spice. It’s excellent neat, but add just a little water and you’ll detect some candied fruits as it opens up. SoDo, 1250 Alaskan Way; 206.504.7604; copperworksdistilling.com

Chambers Bay
Greenhorn Bourbon
$27, 375 ml bottle
An opening salvo in what is hoped to be a long line of bourbons, Greenhorn won gold in the San Francisco World Spirits Competition. Made with yellow corn and soft white wheat from Grant County, along with the distillery’s proprietary wild yeast strain harvested from a local apple orchard, this bourbon is then aged in one of the University Place distiller’s floating Puget Sound boathouses (the motion expedites aging, and the sea adds a trace of salt). Enjoy it solo, over ice or in cocktails, such as the Artist’s Special (recipe at seattlemag.com). University Place, 2013 70th Ave. W; 253.292.5962; chambersbaydistillery.com

Bad Dog Grandpa’s Wheat Whiskey
$42, 750 ml bottle
A 90 proof, 100 percent organic wheat whiskey aged in a used bourbon barrel, this has a very soft, smooth, welcoming character and a rich wheatiness, accompanied by just a touch of honey and vanilla. This has a limited release, but the distillery will have more in a few months. Try its corn-based whiskey or Grandpa’s Likker (an un-aged moonshine-style whiskey) while you wait. At the tasting room, you can meet Hank, the distillery’s namesake dog. Arlington, 19109 63rd Ave. NE, Suite 1A; 360.435.3981; baddogdistillery.com

3 Howls Backbeat Bourbon
$29.50, 750 ml bottle
Aged in French oak, 3 Howls’ latest whiskey (it also produces rye and hop-flavored whiskeys) has a little honey up front, and nice vanilla, spice and oak tastes merging on the tongue in the middle and finish. This bourbon is 92 proof, but smooth which makes it a good solo sipper as well as a nice player in cocktails such as the Welcome Back, Weary Traveler (see recipe at seattlemag.com). SoDo, 426 S Massachusetts St.; 206.747.8400; 3howls.com

Heritage High
Altitude Brown Sugar Bourbon
$45, 750 ml bottle
Look at Heritage’s lineup of 10 whiskeys, and you’ll see that master distiller and CEO Dain Grimmer is (as he told me) “constantly experimenting with new ideas.” This whiskey is certainly singular, with cinnamon and toasty brown sugar notes. There’s a lower-proof version, too, but I like the underlying backbone and balance of the 103-proof model. It’s great around the campfire by itself or with an ounce or two of it added to hot chocolate. Gig Harbor, 3207 57th St. Court NW; 253.509.0008; heritagedistilling.com