It's been a long time coming, but "lean proteins" are in your future. 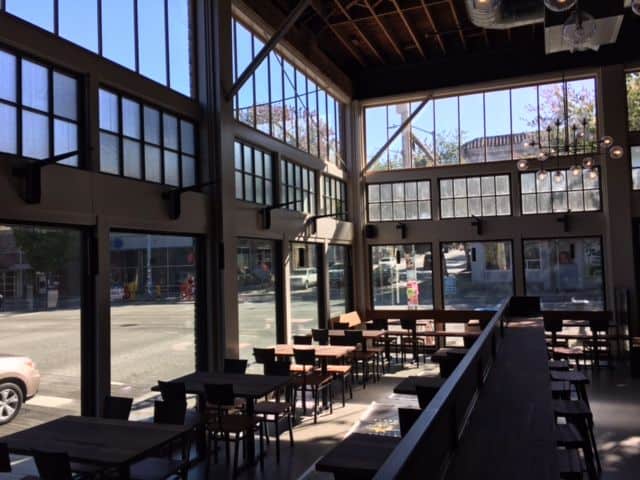 It was May of 2015 when news first broke that RockCreek chef/owner Eric Donnelly and his partner Christy Given were taking over the large corner space—a former furniture store—at the corner of Greenwood Avenue N and N 85th Street. They originally aimed to open FlintCreek Cattle Co. in the fall of 2015. But a lot has happened between then and now.

First, there were the usual setbacks—mainly, in this case, the extensive seismic retrofitting a 1910 building needs in order to be restaurant-ready. They did away with the lath-and-plaster ceilings to expose the beams; refinished a beautiful wood floor upstairs that had been there since the building’s beginning. As March rolled around, Donnelly says, they were closing in on feeling ready. And then the Greenwood explosion knocked them, quite literally, back about seven months.

It was a natural gas explosion in the early hours of March 9 that leveled Neptune Coffee, Mr. Gyros, and the Greenwood Quick Stop—all business that share the block with FlintCreek—but Donnelly’s building was luckily still upright. The damage was relatively minor. But, he says, the climate of a neighborhood in recovery, not having gas or electricity, not being allowed in the building for some time, and a fire marshal investigation impeded the progress of opening. And here we are: the first day of full service is scheduled for Monday (Oct. 24).

Despite the name, don’t expect to see any beef here. This is not your average steakhouse. “We’ve always wanted to do something like this—RockCreek was originally going to be RockCreek Roast House,” Donnelly said in an email back in January. “I’m really looking forward to playing with more lean proteins—proteins that may be less familiar to diners. The same way we try and feature more out-of-the-ordinary fish at RockCreek, we’ll be serving ranch and game meat at Flint Creek—think bison, venison, quail, pheasant rather than beef and pork. I want people to feel good after they eat here—good and satisfied. I think we’re going to be able to capture that delicious savory flavor that people crave from a steak with lean proteins in responsible portion sizes.”

Now that the menu has been developed, Donnelly says some of his favorite dishes are duck confit with lentils, braised bison short ribs, lamb crepinette with hazelnut romesco, fennel-braised boar shoulder, grilled kuri squash with burrata… A lot of these dishes feature Mediterranean flavors, a direction he didn’t originally envision, but one he says makes sense because of the flavor profiles these spices build with game meats. Like RockCreek, the menu is best enjoyed when you order family-style and share dishes as a table, though there will be a rotating “cuts and chops” section where you may find a rack of elk, venison leg, or more simply prepared steakhouse-esque fare.

Dinner service starts Monday at 4 p.m. Don’t go thirsty—there’s a full bar (a pretty one, at that), too.