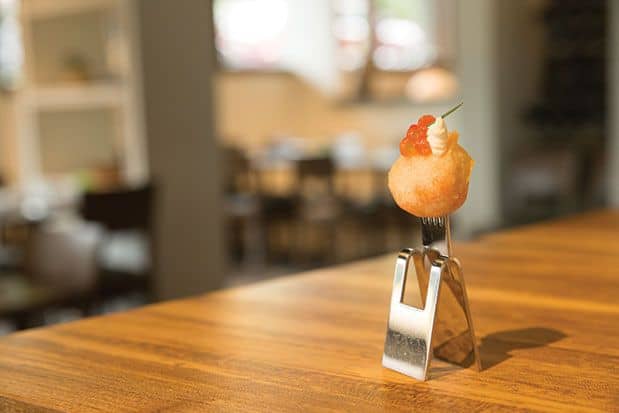 During its tenure, Book Bindery was a beloved contemporary American restaurant on Queen Anne. Executive chef Shaun McCrain and general manager Jill Kinney nurtured Book Bindery into one of the city’s fine dining staples. He crafted beautifully refined, French-inspired cuisine; she assembled a rock-star team and ran the house with gusto. The couple left in summer 2014 (Book Bindery closed immediately, reopening as Hommage) to realize their dream of opening an approachable, high-end neighborhood spot of their own. Bindery buffs will be thrilled to know that spot has arrived.

The 60-seat Copine (pronounced ko-pin, French for girlfriend or pal), which opened in July at the base of the new, mixed-use Ballard Public Lofts, is exquisite, from the Olson Kundig owner/principal Kirsten R. Murray-designed, center-stage, open kitchen to the soothing, neutral tones of the furniture. Every detail has been carefully curated, down to the tiny fork “stands” that hold McCrain’s ever-changing, innovative amuse-bouche, such as melt-in-your-mouth citrus-cured salmon with roe (see more: “Fine Dining Finally Finds Seattle“).

His time as sous-chef at New York’s world-renowned Per Se (2004–2008) informs much of his creativity, his edge. So a classic like foie gras ($20), tempered to a soft-butter consistency, is reimagined as a terrine, with thin layers of savory duck leg confit and cherry gelée; pillowy, handmade agnolotti ($22), perhaps stuffed with squash or pumpkin, is topped with a veal-stock-based brown butter emulsion cut with lemon juice to make your palate crave bite after balanced bite; and accompaniments like falafel (alongside a sensational rack of lamb, $34) are transformed, in this case with the use of organic bulgur for a moister, more toothsome bite.

When the couple ran Book Bindery, many customers wanted to pick up food to go. So, while Copine is only open for dinner, they have added a cold case, dubbed Copine Project, featuring grab-and-go soups and composed salads (11 a.m.–2 p.m. and 4:30–6:30 p.m., Tuesdays–Sundays; noon–4 p.m., Sundays). Larger items, such as roasted chicken or porchetta, also will be available on Sundays. Seattle’s ever-improving economy means that fine dining establishments are opening at record speed. Make sure Copine is on your list. Ballard, 6460 24th Ave. NW; 206.258.2467; copineseattle.com