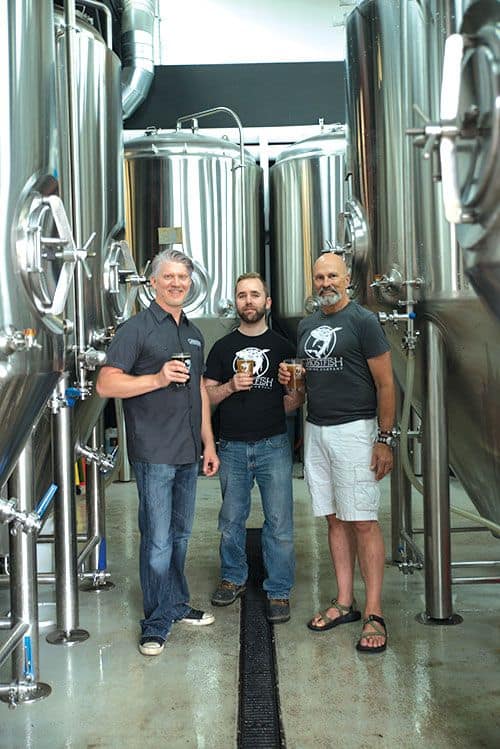 It’s not just a hipster trend or a fad diet. It’s an unfortunate reality that some people simply must adhere to a gluten-free diet to stay healthy. It prevents them from enjoying, among many other things, beer. One Seattle brewery, however, is tightly focused on changing that.

“We wanted to create and foster an inclusive tribe where everyone had access to amazing craft beer,” says Randy Schroeder, co-owner of Ghostfish Brewing Company, an all-ages taproom in SoDo that opened last year.

Only a handful of America’s 4,600-plus breweries attempt to brew gluten-free beer, and very few of those produce something that transcends mediocrity. Most gluten-free beers—which must be brewed without barley (or wheat and rye), a gluten-rich grain that is a key ingredient in beer—are watery, bland and unsatisfying. Ghostfish Brewing set out to defy that well-deserved stereotype when it opened for business in February 2015.

“We sampled all of the available offerings in the category and knew that if we could create gluten-free beers that competed with the best craft beers available, it would pave the way for a new business with a much better chance of success,” says Schroeder, adding that Ghostfish has a beer-first attitude. That is, it makes meticulously crafted, delicious beers that just happen to be gluten-free.

So, how does the magic happen? The most essential ingredient in beer is barley, which gives beer its body, flavor and all-important fermentable sugars. Hops, wheat, herbs, fruit and any other ingredients are important, but they are adornments. Replacing barley with a flavorful, viable alternative is paramount if you aim to brew good gluten-free beer. Ghostfish Brewing replaces gluten-laden ingredients with grains such as millet, malted brown rice and buckwheat—grains that historians believe were used to brew beer-like beverages in the ancient world. Like barley, these ingredients provide fermentable sugar, but also add their own character and flavor to the beer.

“Our ingredients are unique to the brewing world,” explains Schroeder. “We don’t use wheat, barley or rye. Our grains have a much longer history, but have been largely forgotten by the brewing industry. We’ve resurrected these ancient supergrains and are bringing back a bit of a lost art.”

Many gluten-free breweries rely entirely on less imaginative ingredients, such as sorghum or corn, for instance, which provide the requisite fermentable sugar, but fail to add much character or flavor to the beer. Other breweries use barley to create “normal beer” to which they introduce an enzyme that strips the gluten from the beer, with varying degrees of success. Skeptics assert that it also strips away body and flavor. Typically, these are referred to as “gluten-reduced” or “low-gluten” beers, and drinking them is chancy for anyone who needs to avoid gluten.

Ghostfish Brewing’s brewmaster and co-owner, Jason Yerger, was diagnosed with gluten intolerance at the age of 25. Instead of abandoning his love of beer, he began to experiment with ways to brew gluten-free beer, first as a homebrewer and later leaving his career as an acupuncturist to join the team at Ghostfish and brew professionally.

At Ghostfish, both the brewery and the recently added kitchen, where staples such as street tacos and pizza are served, are completely gluten-free. Even folks with the most severe gluten intolerance issues can rest assured that the beer they’re drinking and food they’re eating won’t cause problems.

According to Brian Thiel, also a co-owner of Ghostfish Brewing, “A woman at the bar actually cried when she realized that she could safely drink good beer and eat pizza again. Apparently it had been a long time.” >> Ghostfish Brewing, SoDo, 2942 First Ave. S 206.397.3898, ghostfishbrewing.com

Kendall’s Top Ghostfish Gluten-Free Beers
Ghostfish Brewing’s beers are available on tap at the brewery’s taproom, at area pubs, and in bottles or cans at local bottle shops and grocery stores.

Grapefruit IPA
Deep golden color, a fluffy white head and citrus aromas invite you to jump into the brewery’s flagship IPA. This one is true to its name, with lots of fruity, juicy flavors, and is brewed using grapefruit peel as well as a yet-to-be-named experimental breed of hops (seriously, it’s code-named “Experimental Grapefruit”). A pleasant, pithy bitterness lingers without overwhelming the cheerful and refreshing character of this 5.5 percent alcohol by volume beer. This brew was awarded the 2015 Great American Beer Festival bronze medal and the 2016 U.S. Open Beer Championships gold medal.

Peak Buster Double IPA
No shortage of hops character and a whopping 9.5 percent alcohol by volume define the character of this complex, bitter and ultimately delicious beer. Rich golden in color, sparkling and clean, this brew has an aroma that conjures thoughts of ripened stone fruit, and the flavor is complex, with deep, concentrated flavors of tropical fruit juices and a slight alcohol burn that evaporates on the palate and leaves nothing but a lingering bitterness behind. 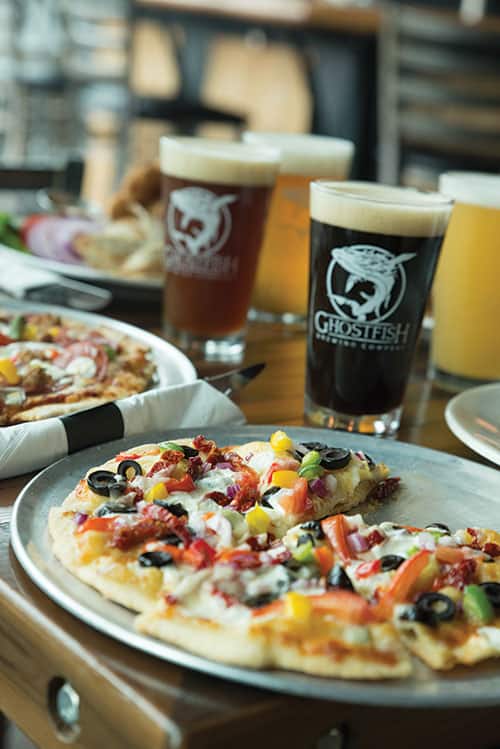 Image: Maria Billorou
All gluten-free, all the time: Ghostfish Brewing serves up gluten-free pizzas and tacos to pair with its brews.

Shrouded Summit Wit
Gluten-rich wheat is a key ingredient in any traditional witbier recipe, so Ghostfish considers this beer an especially ambitious endeavor, like climbing Mount Everest, hence the name. Ghostfish replaced the wheat with millet and buckwheat, and then added other flavors typically found in beers of this type, so you’ll notice a touch of coriander, orange peel and juniper berries. It is noticeably different than traditional witbiers, but stands well on its own, with plenty of aromatic character reminiscent of the style and a manageable, low alcohol level (4 percent alcohol by volume).

Watchstander Stout
Serving as the best testimony to its overall quality, this beer earned one of the most highly coveted medals in the beer kingdom: a gold medal at the 2015 Great American Beer Festival. Dark as night with aromas of milk chocolate and coffee, the depth of flavor in this sturdy, full-bodied beer defies its barley-free backbone, with a myriad of sweet and savory flavors, such as roasted herbs, hazelnut, bittersweet chocolate and more. This one comes in at 5.3 percent alcohol by volume, which is low for a stout, especially one with such substantial flavor.