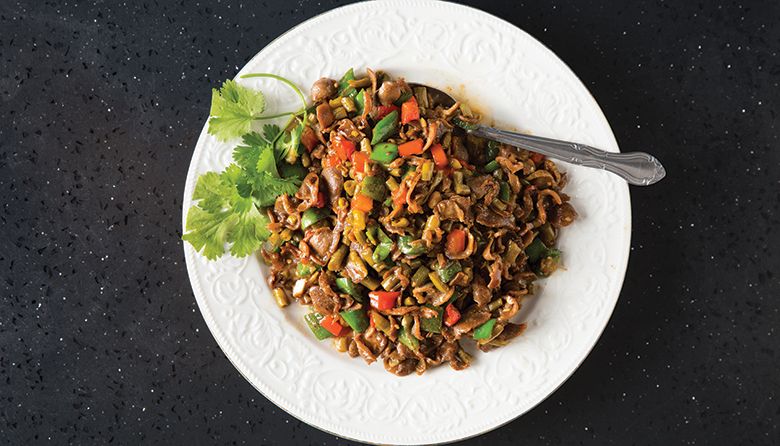 Seattle’s Chinese food scene has long held a few gems afloat on a sea of generic Chinese-American food (think General Tso’s chicken). But in the past decade, the scene evolved, weaving in regional cuisines from across China: first, the mild dumplings of Shanghai, then the mouth-numbing spicy pleasures of Sichuan food, followed by the wide handmade noodles of Xi’an. Most recently, Seattle has gotten its hands on Hunan cuisine. Until now, the spice-and-sour-driven cuisine specific to Hunan—a rural inland agricultural region with historically few resources—was rarely seen outside of China. Those regional characteristics meant that residents of Hunan developed a cuisine based on preserving available foods without electricity and thus refrigeration: lots of pickled vegetables and smoked or cured meats. The strong flavors of preservation and the spicy peppers encourage diners to eat more rice, the cheap staple of the region. The cuisine is a powerful, exciting addition to Seattle’s restaurant landscape at these hot spots. Tasty
It’s clear who the intended audience is for this University of Washington–adjacent restaurant: There’s an Instagram-friendly plant wall proclaiming the restaurant’s name in flowers and a menu designed for single diners, with individual meals that come with rice and soup, rather than the traditional family-style dishes.
Our Pick: The house-special steamed pork belly ($12.99) from the appetizer menu is one of the few milder Hunan dishes, with the fattiness of the pork counteracting the power of the traditional flavors.
University District, 4311 University Way NE; 206.632.2865 Dong Ting Chun
Sleek and modern, clean and efficient, this California-based chain was one of the first to serve Hunan cuisine in the U.S., and now offers it at two Seattle-area locations. With menu items ranging from simple, spicy, wok-cooked cauliflower to ornate whole steamed fish topped with pickled chiles, the restaurants cater to all diners—including kids, with a special menu of milder dishes.
Our Pick: The oversize mortar and pestle you see wheeled up to most of the tables holds the ingredients for mashed eggplant with green pepper and century (savory preserved) egg ($12.99), which you or your server will mash together before eating, creating a wild, umami-blasted version of an eggplant dip, with a fierce bite from the pepper.
Edmonds: 22001 State Route 99, No. 400; 425.616.5616; Redmond: 7425 166th Ave. NE, Suite C230; 425.882.7311

Hunan Chinese Kitchen
This location, right at the center of the University District, has seen a revolving door of excellent Chinese restaurants, including, most recently, SilkRoad Noodle Bar. The current iteration holds up to that same standard, serving silky tofu dishes and house-made soy milk alongside the short menu of traditional Hunan specialties.
Our Pick: Check out the simple but quintessential dish of pork and peppers, called simply “stir-fried pork” ($14.99). It demonstrates how much flavor Hunan cuisine pulls from just a few affordable ingredients.
University District, 4507 University Way NE; 206.429.6455

Sizzling Pot King
Although this California-based chain is named for and promotes large-format pot dishes, these are more a signature shtick using Hunan flavors than an example of classic Hunan cuisine. For a more traditional taste, look to the “assorted marinated meat”—street-food-style meats to gnaw on—or choose a dish from the specialties menu.
Our Pick: Forget sweet and sour—the hallmark of Hunan food is hot and sour, as provided by the chopped chile peppers and pickled green beans that electrify the hot and sour chicken gizzard (imagine ground chicken with lots of flavor; $15.99).
Chinatown–International District: 660 S King St.; 206.624.0314; Bellevue: 14125 NE 20th St.; 425.698.1052

Little Garden
Well before any other restaurants included here opened, Little Garden pioneered Hunan cuisine in the Seattle area, offering a menu of Hunan specialties at its Bellevue strip-mall shop. Come prepared for a wait, as dishes are made fresh in the kitchen. But know that your patience will be rewarded with a menu that brings a rare taste of harder-to-find Hunan dishes made with spiced, smoked and cured ingredients, such as dried bamboo and white peppers.
Our Pick: Spanning the entire range of preservation techniques, the smoky cured duck stir-fried with white pepper and dried daikon ($13.95) scales skyscrapers of flavor and texture.
Bellevue, 14725 NE 20th St.; 425.644.9038