The surprising rise of chef Jay Blackinton, who channeled the spirit of Orcas Island’s rad farming and food culture to find something like stardom 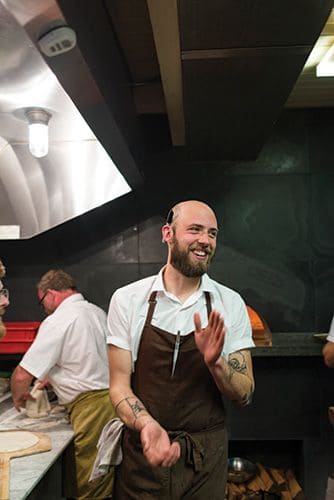 When the name Jay Blackinton showed up among this year’s nominees for the James Beard Rising Star Chef of the Year award, you could almost hear a collective “Who?” issue from the people who track these things. With good reason. Six years ago, the 27-year-old was a vegan bike messenger in Seattle with cooking experience pretty much limited to making sandwiches.

Blackinton moved to Orcas in 2009, looking to escape some of the negative influences of city life and to connect with the food system in a more real way. He met John Steward, farmer/owner of Maple Rock Farm (aka MRF), signed on as a farmhand and began baking pizzas in MRF’s outdoor wood-burning oven—with the pizza drawing crowds on Friday nights. So when a little shop called Passionate for Pies in Eastsound closed its doors, Blackinton and Steward, along with Geddes Martin, chef/owner of Inn at Ship Bay, took over the space. In the tiny restaurant, which seats no more than 32 inside and about 20 more at its outside picnic tables (when weather permits), Blackinton and crew resumed their pizza parties, eventually opening as Hogstone’s Wood Oven.

“The opportunity presented itself, and we thought, let’s see what we can do,” says Blackinton, who is wiry and strong from farming and sports a beard and tattoos. “We are making it up as we are going along.”

Pizza is the foundation here, but it’s not the whole deal. “It’s a lifelong obsession, and we try to do it very well,” Blackinton says. “[Pizza] pays the bills and gives us a chance to do other things, such as the tasting menu.” Here, the chef is not stuck on “protein/starch/veg” entrées, offering an ever-shifting sampler, which is usually around seven courses, depending on what ingredients the island offers up, the whims of the kitchen, and how busy and how ambitious the staff is feeling. Photo by Easton Richmond
For Blackinton, pizza has been a lifelong obsession

“We’re trying to create a narrative through food, the story of this island,” says Blackinton. “Every ingredient has to have some context, some purpose for being on the plate.” Take The Pig and Its Food, one such tasting menu, where a small plate of Orcas-raised Mangalitsa pork was served with the very foods those pigs ate while they were pampered under Blackinton and Martin’s care at MRF, including barley, apples and chestnuts. An Old Cow and an Old Field featured the tenderloin of a 5-year-old dairy cow from Coffelt Farm, an island farm that has been in continuous operation for more than a century. This “old” cow (most beef at top-end restaurants is no more than 2 years old) was incredibly tender and mild, served with a green sauce of vetch (a flowering cover crop) and grasses with potatoes from MRF. 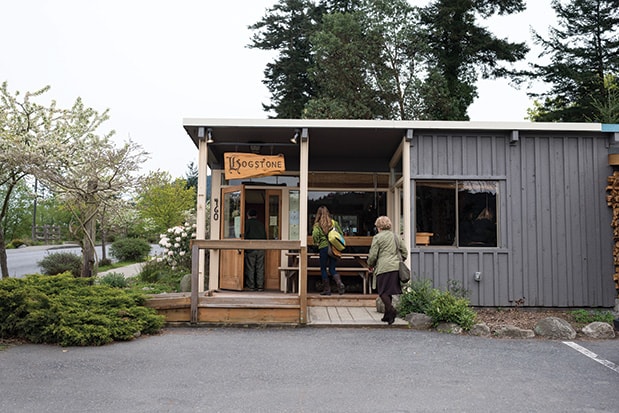 Blackinton was “floored” by the James Beard nomination (he didn’t win), and no one is quite sure who nominated him. But it shows that the attention of the culinary world is focusing on the San Juan Islands. Blaine Wetzel of the Willows Inn on Lummi Island won last year’s James Beard Rising Star award and is a nominee for Best Chef in the Northwest this year.

But Hogstone’s is no Willows. It’s a different animal, and definitely born of Orcas Island, where young, seasonal farm interns come to learn about permaculture and foraging, and then leave for the winter to trim marijuana in California or work at a ski resort. Many, like Blackinton, fall in love with the place, and stay because of the abundance the island has to offer—the beauty, the people and the fact that there are opportunities for creative entrepreneurship here.

And the San Juan archipelago definitely gives in abundance. The beaches offer bright green and brown sea lettuce, salty sea beans (samphire), deep brown bull kelp for pickling and the odd cockle. In springtime, you might overhear a conversation at Enzo’s Gallery Caffé, a local hangout where everybody knows your name, about people’s hands stinging from picking nettles, or whispers about magical patches of chanterelles in the woods. You’ll see cars stopped on the side of the road plucking petals from Nootka rose hedges in spring, gathering blackberries in summer or rose hips in the autumn. Salal berries flourish in the woods, along with small bursts of salmonberries and thimbleberries. Photo by Easton Richmond
Like many Orcas Island chefs, Blackinton feels a connection with the land

And with the island’s long farming tradition, chefs have a lot to choose from. Four oyster farms—Buck Bay Shellfish Farm and Judd Cove Shellfish on Orcas, Westcott Bay Shellfish Co. on San Juan and Jones Family Farms’ Sweetwater Shellfish Farm on Lopez—have Pacific, kumamoto, European flat and some native Olympia oysters available for the summer season, as well as clams and locally caught Dungeness crab, salmon and halibut when in season. Coffelt Farm is now being run by several energetic young farmers eager to produce the best grass-fed lamb, poultry and eggs possible.