It Took a Village, But Copal in Pioneer Square is an All-Day Fiesta

A team of industry vets reinvents the former Bar Sajor. 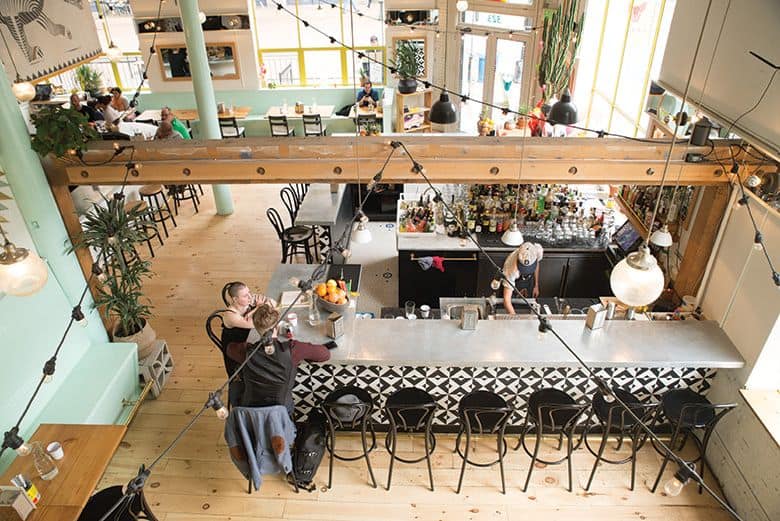 Peek behind the proverbial curtain at Copal and you quickly realize how small this town is, and particularly the restaurant industry. Matt Dillon, the chef/restaurateur behind Sitka & Spruce and other places, whose Bar Sajor previously inhabited this Pioneer Square space, met partners Emma Schwartzman and Chris Rice when the two worked at Union, Ethan Stowell’s first restaurant. Both are restaurant vets of nearly 20 years.

A fourth partner, Eric Fisher, is Dillon’s designer, responsible for transforming Bar Sajor into Copal: “We took it from this muted, Old World, soft European vibe to a bright, sunny, minimalist Latin American vibe,” says Schwartzman. You’ll notice the pop of aqua and pink immediately, along with cacti in the corners and bowls of pineapples on the geometric-tiled bar.

And though Dillon designed the original menu—an assortment of shareable Latin American bites, from chicharrón (fried pork rinds, $5) to watermelon salad ($6.50)—adaptations have been made by chef Taber Turpin, former owner/chef at Tacos Gringos on Capitol Hill. Besides history, this motley crew shares a passion for Latin American foods. “It’s a style of cuisine that we really love and a part of the world that we’re really drawn to,” says Schwartzman.

The main limitation—or advantage, depending on how you look at it—is the restaurant’s single heat source for cooking: open flame. So, Turpin and his team are preparing rotisserie chickens ($14 for half, $25 for whole), barbacoa beef and pork for tacos ($4 each), and even smoking vegetables for the quesadilla (three for $10) on the wood-burning grill and oven.

Plates are small and add up fast—it’s definitely not hard to put away three tacos rather quickly—but you’re paying for the ambiance here as much as the food. The fiesta vibe starts at lunch and lasts through dinner; regardless of the time of day, the best seats in the house are the counter stools around the kitchen’s open fire.