12-year-old baker has already interned at Canlis. What have you done today? 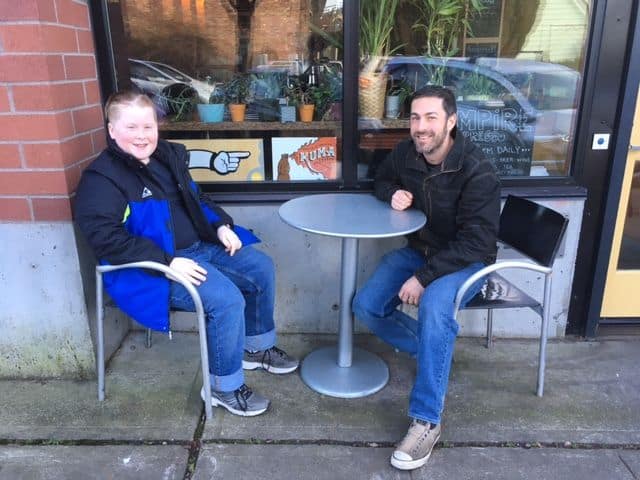 At an age that many of us were sitting at home listening to sad pop songs and lamenting the impending teenage years (no, just me?), Columbia City resident Jason Intravartolo spent his summer filming season 3 of the Kids Baking Championship, which premiered Monday night on the Food Network.

Jason is a disarmingly charming, funny, well-spoken kid, with a smattering of freckles across the bridge of his nose and a ginger Macklemore-esque pompadour, courtesy of his mom Shelly, who’s a hairstylist. The Mercer International sixth grader has already been cooking for years. Shelly started him on eggs—she didn’t find out later that that’s the dish actual chefs aim to master first—at an early age; now, he loves baking: “I just really love the science of it,” he says. “I find it really, really fun. When I do it, I just feel like I’m having a great time!”

On Monday’s episode, Jason made vanilla tie-dyed cupcakes with a carnival theme for hosts Duff Goldman and Valerie Bertinelli. Though he was docked for not topping his cupcakes with frosting—Goldman said, “That’s a muffin!”—he made it through to the next round.

Last year, Jason ended up in the Canlis kitchen for a two-day internship, coordinated by his mom, Shelly, who cuts the Canlis crew’s hair. From the sounds of it, the guys didn’t go easy on him—Shelly says the first day he spent talking a lot and whistling and generally being a kid in a kitchen, and she told him to go back the second day and say nothing but “yes, Chef!” Jason took this to heart, and took the heads off the day’s shrimp without complaint.

When he’s not working eight-hour shifts at the city’s finest restaurant, Jason is taking classes with chef Tarik Abdullah, who’s readying his own restaurant/community space Black & Tan Hall. In fact, it was Abdullah who referred Jason for the show, and has acted as a mentor to the budding baker.

And though Jason is one wildly talented, physically comedic kid, it’s clear that the mentors and parents in his life have played a huge role in his success. His dad, Pete Intravartolo, said that the process of interviewing for the show has been a reward in itself, regardless of the outcome. “Over time, you see opportunities that have come and gone in your own life, and you have to just go for it,” Pete says. “I think the process of taking chances is huge. It’s a lot of sacrifice on everyone’s part, but it’s an opportunity you have to take if you want things like this to happen in life.”

What happens next? Tune in next Monday, when the kids tackle volcano bundt cakes. Jason can’t tell us how far he made it in the competition, obviously, but we’re wishing him loads of success—he says he’d use that $25,000 in winnings toward his business idea: Jason’s Crepes and Bakes.