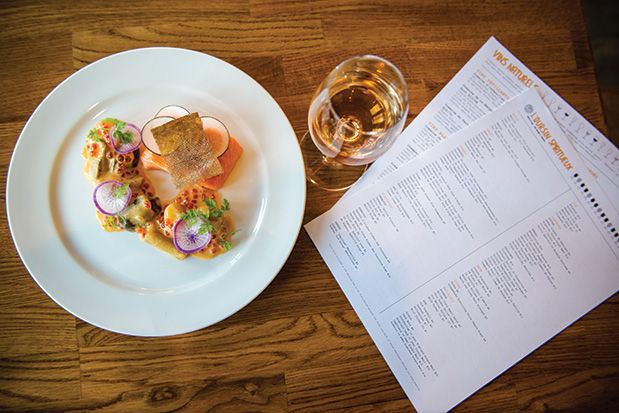 From a diner’s perspective, the only evidence that L’Oursin chef/owner JJ Proville and his team didn’t hire expensive professional designers to create his Central District restaurant’s interior is the fact that it doesn’t mirror the trends found in other new restaurants. It’s still lovely, to be sure. Instead, he says, the aesthetic—more brass chairs and soft lighting than exposed brick and reclaimed wood—was most influenced by a little coffee table book on French bistros. Cheesy, maybe, but the chef, raised partially in France, knows what he’s doing.

Instead of buying fancy furnishings, Proville and his business partner/general manager, Zac Overman of Sitka & Spruce and Rob Roy, spent their (admittedly limited) dollars on a functional, flattering design pulled together from their shared experiences: The zinc bar, Proville says, takes “a lot of cues” from Fort Defiance, the Brooklyn restaurant where both he and Overman worked; the layout of the kitchen was partly inspired by the time he spent at New York’s Gramercy Tavern.

The food, too, is a nod to past while still remaining in the present. Proville says his menu uses traditional French techniques, although the dishes may read as unique to those who arrive expecting the standards from Seattle’s more stereotypical French bistros. (You could liken the difference to that between a red-sauce Italian joint and Il Corvo, another of Proville’s alma maters.) Take, for example, the soupe de poisson (price varies): a beautiful seafood soup served en croute, that is, with a balloon of puff pastry on top. The opening menu featured a dish of uni—the name L’Oursin means “the sea urchin”—and foie gras. We tried a halibut in oxtail ragout that worked surprisingly well. Seafood is a priority here, and you’ll see the offerings and preparations change daily.

To complement those offerings, wine director Kathryn Olson has put together a list of local and French organic and/or biodynamic wines. Read the funny, descriptive flavor profiles on the menu, or ask your server for recommendations on pairing, as these wines are a little unusual if you’re more familiar with bold Burgundy reds.

“There’s nothing wrong with the classics—I crave steak frites and a bottle of red at Le Pichet,” Proville says. “But classic flavor combinations and techniques are not the same as tradition, and if people expect traditional French food, they’re not going to find onion soup here.” Unconventional, in a good way.