Making and Aging Your Own Homemade Eggnog: A New Thanksgiving Tradition 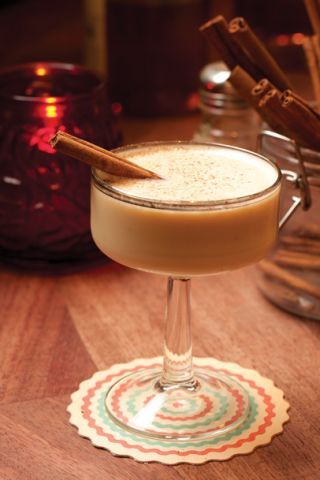 It all began a year ago last September. I was chatting with Sun Liquor barman Erik Chapman about his homemade eggnog for our December issue. I’d heard very good things about his boozy nog, which he makes the weekend of Thanksgiving and ages for a month. But I’d never tasted it; he only serves it on Christmas eve and Christmas day and for me, it’s pretty hard to sneak away at those times.

Still, Chapman’s enthusiasm got to me. I decided to whip up my own batch on Thanksgiving weekend, as Chapman does. I went in search of a recipe. For no real good reason I decided to go with this eggnog recipe I found on Chow.com. I went all out—I bought farm eggs and heavy cream a from the people I buy my turkey from every year—figuring the freshest and best was worth it since the beverage is almost entirely about egg yolks, cream and booze.

I stirred it all up in a big bowl, then I put it into growlers and shoved it into the back of the fridge until closer to Christmas. (Okay, truth be told, my husband and I regularly nipped on half-cup portions on the rocks while wrapping gifts. Our spirits were lifted!) Yes, I’d read all about the risks of the raw eggs, but I felt fine about it; you’ll have to decide that one for yourself. Still, when it came time to pour some over rocks with a little fresh grated nutmeg on top for my family on Christmas night, looks of skepticism spread through the room. But the brave sipped, and they were convinced. And they asked for seconds.

This year, I decided to make my batch earlier; we had leftover nog last year that we’d sip by the fire into February. I liked it best in January, when it’d aged about two months and was mellow and butterscotchy from the bourbon. I started my nog a few weeks ago. But if you’d like to start a new family tradition, make time this weekend to whip up your own batch. And just know that this recipe makes a generous amount. No one will be the wiser if you decide to start taste-testing it straight away.