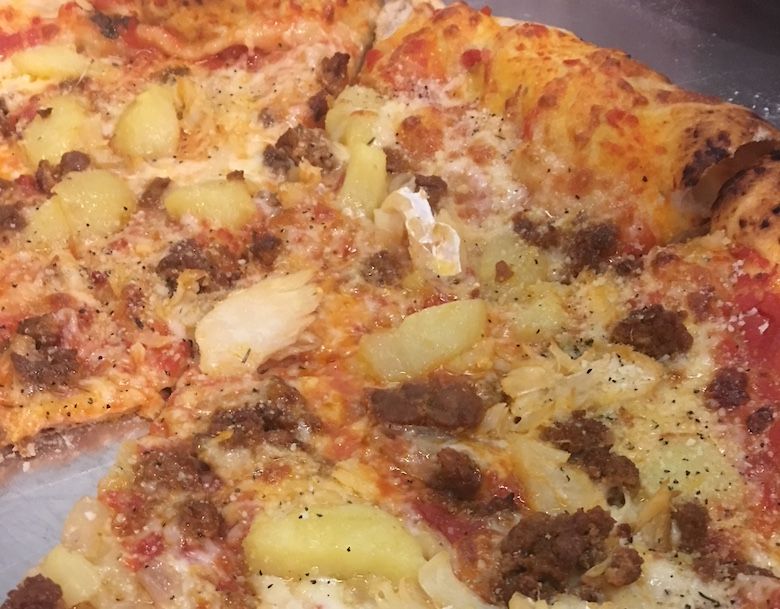 Nobody doubts that chef Mark Fuller knows his way around fried chicken. His original restaurant Ma’Ono makes some of the best, which he has transformed into the painfully addictive hot chicken sandwiches at Ma’Ono’s offshoot inside Rachel’s Ginger Beer at U Village. He’s also tackled American-Chinese Food—where, you guessed it, fried chicken plays a prominent roll in his popular take on General Tso’s. But now, for something completely different: Fuller opened a vegetarian burger joint this week, with a pizza bar coming this Sunday.

In what may be the least Google-able (but adorably punny) restaurant name in town, ‘Table opened Tuesday in the Denny Regrade. His partner (and principle owner) is Doug Kawasaki, whose experience at John Howie and Canlis must mean this is the finest casual burger spot ever.

Don’t get ‘Table confused with Next Level Burger, where the products are entirely vegan. Fuller and Kawasaki are using some animal products—like the most crucial burger component: American cheese—but the patties will all be made in house from the likes of fried mushrooms and eggplant, plus barley, quinoa and cashews and enough seasoning to make it all delicious. “We decided [this burger] has to be the same sensation as eating a Dick’s cheeseburger, or whatever fast food burger,” Fuller said.

Thank goodness… a wheat bun has no place on a burger.

‘Table is a project Fuller says is about two years in the making. Neither man is a vegetarian—quite the opposite, actually—but loved the idea of having a veggie-focused spot. Supreme’s opening happened sooner—it sort of “fell into my lap,” he says when talking about the West Seattle location just a few doors down from Ma’Ono.

If ‘Table is meant for the lunch crowd, Supreme is designed for the dinner crowd, when it’s more socially acceptable to have a cocktail with your slice. His main man there is John Montenegro, a former sous chef at Dino’s. Original reports made it sound like the menu at this 21-and-over bar/pizzeria would be all wacky toppings on NY-style crust. But when they were experimenting with toppings like spaghetti and meatballs or nachos, Fuller says, “I just couldn’t do it. We can have fun with it and maybe do something like this for specials, but in the end, we didn’t want to have our identity being kitschy pizzas.”

Instead, look for Neapolitan-meets-New York pies in combinations that just take a slight twist on the standards: Portugese sausage instead of ham on the Hawaiian, salt code instead of anchovies with chorizo and potato, spicy coppa with ricotta and ghost peppers.

Years ago, when he was hustling in the kitchen at Spring Hill (Ma’Ono’s higher end predecessor in the same spot), did he foresee having his hand in so many different restaurant projects? Fuller says he doesn’t quite remember, and that as much as he loves cooking, he’s happy to not have to hustle in the kitchen quite so hard anymore. He splits his time pretty equally between the spaces—except at ‘Table, where Kawasaki will oversee the day-to-day operations.

“I’m not as ambitious with food as I once was,” he said, while chatting about Spring Hill. “I just really want to have fun.”

And we just want to eat your delicious food.