Thankfully, Bruce Naftaly of Le Gourmand couldn't stay out of the kitchen. 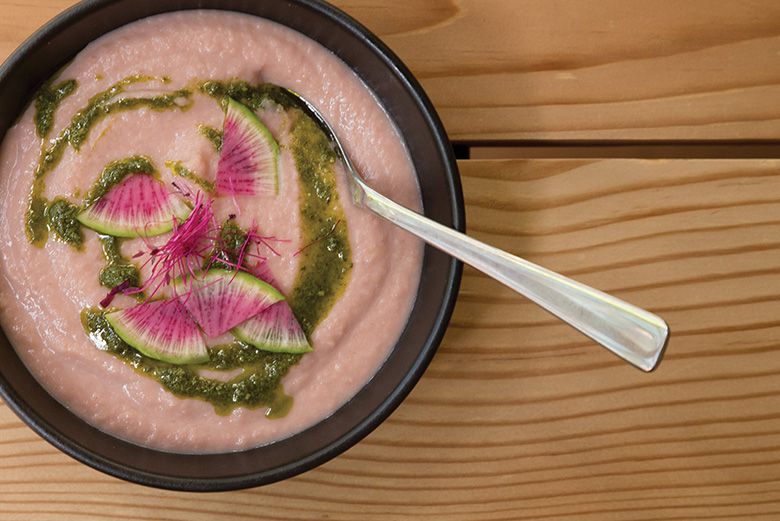 Bruce Naftaly is good at many things: making perfect classic French sauces and transcendent soups, laughing modestly, wearing a jaunty knit cap. Retirement, however, isn’t one of those talents.

When Naftaly and his wife, Sara, closed Ballard’s much loved Le Gourmand in 2012 after a 27-year run, operating another restaurant wasn’t in their plans. And yet here they are, the newly crowned king and queen of Capitol Hill’s Chophouse Row: Bruce behind the soup pot at Marmite (opened in December), the light-filled anchoring spot formerly occupied by Chop Shop; and Sara baking bread and beautiful pastries next door at Amandine (open since 2015).

This turn of events, Naftaly says, wasn’t premeditated. He had been teaching cooking classes and helping his wife at the bakery. Then, Chop Shop closed, and the building’s owners and its other tenants approached the couple, and investors “materialized out of the blue,” he says. The nearly turnkey space “was very hard to refuse.” So, they didn’t.

Marmite, a term for a French cooking pot and not a reference to the funky British toast spread, serves simple French cuisine for lunch, dinner and weekend brunch. There’s a bar in back called Spirit in the Bottle, located in a way similar to how the cocktail lounge Sambar was within Le Gourmand. Regardless of the time of day, the restaurant walks a delicate line between feeling homey and being a place worthy of a special occasion.

“This time around, the idea is that [the restaurant] would be a kind of legacy thing, where I’d be an executive and not be on the line cooking every day,” Naftaly says, although every time I’ve visited, he’s been at the stove. “I wouldn’t be running a place like I did for so many decades if I was good at delegating things,” he says, laughing about his years spent slaving over Le Gourmand. “But it’s a good skill to have.”

Even if Naftaly isn’t the one cooking, know that you’re in good hands; he tastes every sauce and stock (which you can pick up to go). What’s best are French classics: rustic pâté de campagne ($14), blintzes in a chive beurre blanc ($16) and a coq au vin blanc ($28) so balanced and exquisite, I considered licking the plate. As the name suggests, soup is a strong focus at lunchtime, and the chicken soup with buckwheat noodles ($9) is the very definition of comfort food. And always get the Amandine bread.

It’s safe to say that if you liked Le Gourmand—or even if you were foolish enough to never go—you’ll love what the Naftalys are doing here.

Must Try
Whatever seasonal soup is simmering on the burner, be it Jerusalem artichoke or spring radish or wild mushroom.