Hook a trout from a mountain stream and you’ve just bagged one of the forager’s biggest prizes. 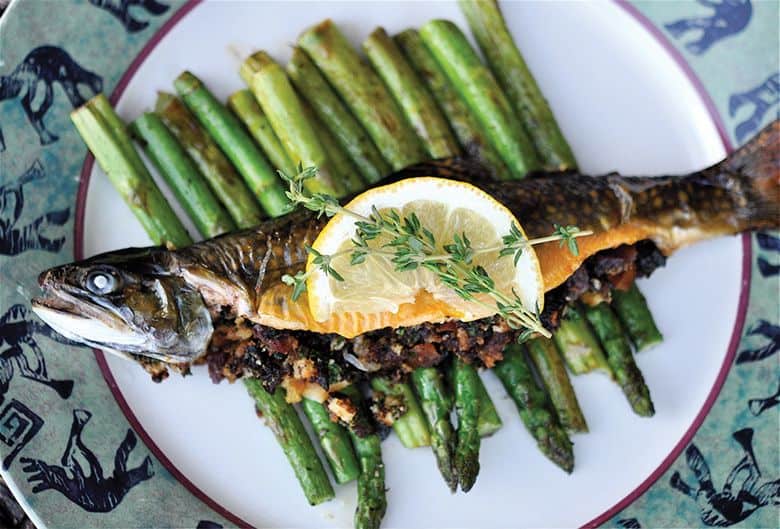 For me, foraging began as a way to eat well in the backcountry. Most of us who have made extended trips into the wilderness have at some point relied on the quick ’n’ easy ingenuity of prepackaged freeze-dried meals. Just add boiling water.

But the convenience of astronaut food rarely measures up to the natural splendors of the alfresco dining room where it’s served.

Morel mushrooms, on the other hand—or fiddlehead ferns, miner’s lettuce, huckleberries, and a host of other wild foods—can elevate a simple camp dinner in ways that might make the fancy-restaurant patron jealous. What’s more, the treasure hunt that leads to the capture is just as satisfying as bagging a nearby peak.

On this score, few outdoor culinary pleasures can match a meal of mountain trout. The catching, the cooking and the devouring all make for a memorable time in the woods. While most of the foraged foods that one is likely to scrounge up in the outback are side dishes or flavor accents, a trout is the whole shebang.

This is why I usually have a lightweight fly rod with me on backpacking trips. When you can find protein miles from a trailhead, you can also travel with a lighter pack and eat like the king of France en plein air. Truite au bleu, s’il vous plait? 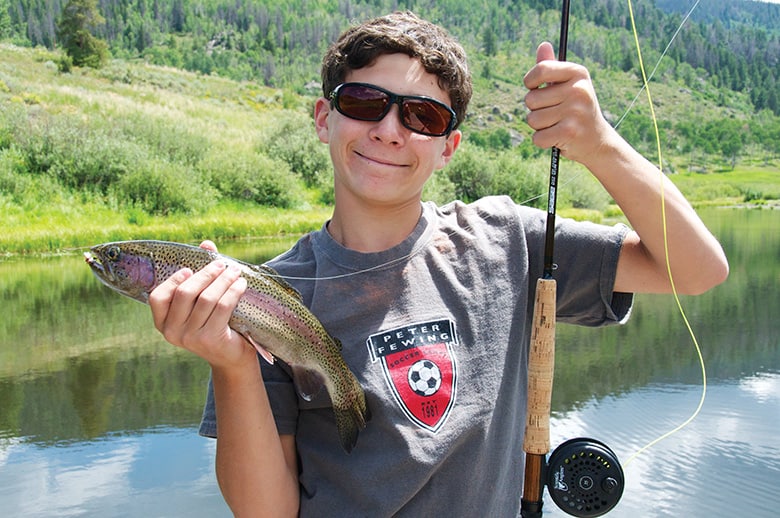 Photo by Langdon Cook. You’ll eat well on the trail if you’re lucky enough to hook a fish like this rainbow trout, caught by Cook’s son, Riley.

Although trout historically were absent from most of the high-elevation haunts where we now find them, years of official (and not-so-official bucket brigade) stocking have landed them in alpine and subalpine lakes and streams throughout the Cascade and Olympic mountains, where many populations are now self-sustaining.

Finding these fishing holes requires boots on the ground and a willingness to explore. Former hot spots become fished-out or overpopulated with legions of stunted brook trout, a non-native char that is usually too small for the pan, yet crowds out other species. Many lakes and streams have been purged of stocked trout in an effort to restore their native flora and fauna. But there are still plenty of places where a fat mountain trout might lurk. Stay away from popular trails. Look for bodies of water only accessible by bushwhacking. Part of the fun is studying maps and then doing the empirical research.

A few years ago, I made a solo backpack trip into a canyon on the Colorado-Wyoming border. As I gained elevation, rising from sagebrush steppe into conifer forest, I started seeing wild mushrooms—first spotting oyster mushrooms on rotted logs and then chanterelles in the duff. The coup de grâce (or so I thought) was an enormous fruiting of porcini mushrooms on the edge of a mountain meadow. I picked pounds of the fungi as I went and then finally dropped my pack along a meander of the pretty canyon stream.

My menu, however, was not complete. With fly rod in tow, I crept along the bank, making stealthy casts, and soon had a bright, 12-inch brown trout in hand. I cleaned the trout, filled its cavity with a sautéed medley of the mushrooms and some instant rice, and proceeded to pan-fry the single best stuffed trout I have ever tasted, anywhere. That it was beside a picturesque subalpine creek, miles from the nearest road, made it all the sweeter.

In a frying pan over medium heat, sauté bacon and remove when crispy, crumbling into a medium-size mixing bowl.

Sauté diced onion in bacon fat for a couple of minutes until soft, then add mushrooms and cook for another 4 or 5 minutes, making sure mushrooms expel their moisture. Add thyme and cook for 1 minute.

Add onion-mushroom mixture to bowl with bacon and combine with breadcrumbs.

Place both butterflied trout on a baking pan lined with greased foil. Squeeze lemon juice over the trout (and the stuffing if it’s too dry) and season with salt and pepper. Fill trout cavities with stuffing and secure with toothpicks.

Bake at 400 degrees for 15 minutes, or until fish is cooked through.