It's time to celebrate: Spring's right around the corner and there's all kinds of spirited happenings within Seattle's craft beverage scene 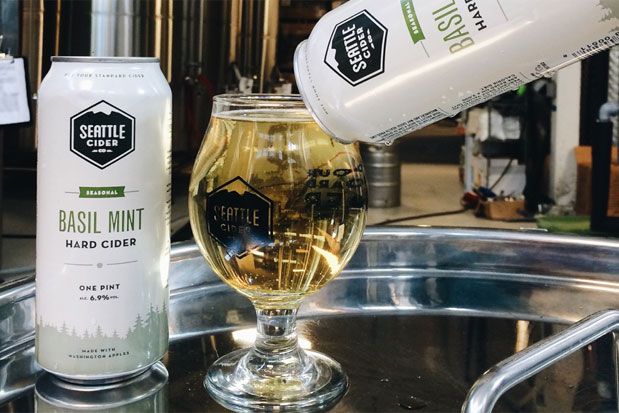 It’s hard to believe, but February is coming to a close. It’s my favorite month (admittedly because it’s my birthday month!) and it goes so quickly, but the best part about February’s end is that it signals spring is around the corner. Celebrate with the cider, bar, beer and booze news below.

Seattle Cider Company Basil Mint Is Back: A now-annual occurrence that for me is one of the harbingers of spring, this Sodo cidery’s most popular seasonal cider became available again at their Woods tasting room last week (arriving at other locations throughout March). Created with 100 percent fresh-pressed Washington apples and 100 pounds each of fresh basil and mint, which is muddled on site and added during fermentation, this cider maintains the lovely dryness Seattle Cider is known for, with herb and floral accents and a tart finish. It’s springtime, sip-able. seattlecidercompany.com

Pre-Order Wildwood The Dark Door Bourbon Now: Open the door to one of Washington’s anticipated new whiskey releases by pre-ordering Wildwood Spirits’ The Dark Door bourbon. To be sure your bottle is ready at launch, you’ll need to order over the phone (425-286-1002); then you’ll be shipped an $80 gift card that can be redeemed for a bottle on release during February, 2018; the gift card cost covers tax and is less than the bottle’s retail price post-launch. I recently had a chance to sample The Dark Door, and while there’s still aging to go, the taste is already coming into focus: rich, with a little grain and oak as you’d expect, but also sweet caramel, baked goods and delicate floral notes emerging. wildwoodspiritsco.com

Become a Rum-Runner at the Smith Tower: In a shout out to Seattle’s bootlegging past, the Smith Tower recently unveiled its Rum-Runner’s card ($59). The card provides you with a bunch of benefits, including unlimited year-round access to The Observatory, Legends of Smith Tower Exhibits and the Temperance café and bar, two free guest tickets per year, 10% off at the Provisions general store and the bar, and a free drink during your birthday month! smithtower.com/rumrunner.php

Music to My Beers in Tacoma: If you love beer and local music, you won’t want to miss being at a unique event March 2 at 7 p.m. at the Washington State History Museum, in partnership with Three Magnets Brewing. “We’ve made a mashup of our two biggest exhibits [A Revolution You Can Dance To: Indie Music in the Northwest and Steins, Vines & Grinds: Washington’s Story of Beer, Wine, and Coffee], and the result will be a special evening filled with craft beer tasting and local ’90s indie music,” said Erich Ebel, the museum’s marketing and communications director. “Three Magnets has created four specialty brews inspired by artists and events from that time in Washington history just for this occasion.” The Music to my Beers event includes exclusive tastings of the new craft brews, music from the artists that inspired them, games and activities, and a commemorative glass. See the full list of beers here; perhaps most intriguing: Art Chantry’s Imperial Bitter made with assistance from the legendary poster artist. washingtonhistory.org/visit/wshm