At Alchemy, the drinks are fussed over and it pays off. 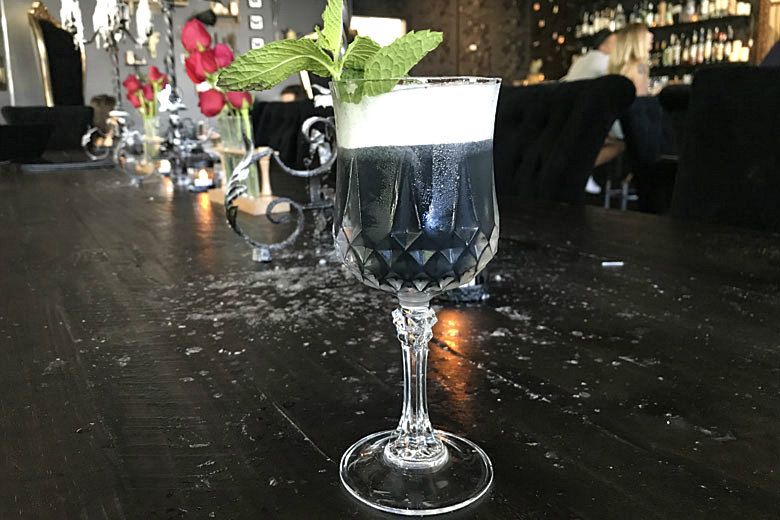 Opening back in May just blocks off the West Seattle Junction, Alchemy is bringing in locals looking to try its hand-crafted cocktails, market-inspired food and distinctive design. The new bar from F2T Hospitality is the second solid cocktail joint to open in West Seattle this year. I recently checked it out with my wife and a few friends and here are three impressions.

The Drinks: When sitting down at Alchemy, you might be warned that the drinks take a little longer to make, but it’s worth the wait. Amiable bar manager Tony Larson (formerly of Aston Manor, Still Liquor) has put together a cocktail list utilizing a raft of seasonal and housemade ingredients, and some interesting techniques.

Other highlights include a fresh pineapple daiquiri hitting the menu soon (we got a sneak peek) that’ll pair perfectly with sweaty days, and the King’s Ransom—Westland single malt, rums from Ron Zacapa and Smith and Cross, Pedro Ximénez sherry, black walnut bitters. It’s a profound pleasure served over one big ice cube and delivered in a Paul Revere-style lantern! There’s also beer, wine and bubbles, plus low- and no-proof drinks made with the same care as the extensive main potions list.

The Food: The edibles from chef Larkin Young (who helms all the F2T Hospitality kitchens, including Vine and Spoon, slated to open in West Seattle this fall) change as produce goes in and out of season, echoing his love of local farmers and farmers markets. A great example is the cold asparagus soup, which encapsulates the vegetable’s essence and comes accented with a hint of Walla Walla onion and thyme ash. It’s a dish that screams summer.

The deviled eggs are a hit already, and demonstrate that the bar isn’t the only part of the restaurant seeking unique preparations. They feature both cured and smoked yolks, with the latter grated on top, with bacon layered between the egg white and yolks (they’re also available and still sumptuous without bacon). For the extra ravenous, a few larger dishes are among the dozen or so items on the food menu. One tip: Ask your server about the “secret menu.” That’s all I can say, but give it a try!

The Space: Once inside, Alchemy’s ambiance is a stark change from the building’s nondescript exterior—it’s a black-and-candled affair approaching gothic romance, except with more comfortable seating. You’ll snuggle into wing-back chairs, leather couches, black metal barstool at the marble-topped bar or at a giant wooden table in the room’s center.

Surrounded by velvet-covered chairs with a chandelier above and candles flickering, it could be a dinner table for exiled 1500s European royalty. There are a few white tables outside and one two-top with huge chairs the staff has dubbed “the thrones.” The well-stocked bar is bordered with apothecary drawers, and vintage pictures hang on the walls. While sitting near the cocktail-creation at the bar is always a solid bet, I wouldn’t blame you for cuddling into a couch, either.