Shopping mall "dining" was once an oxymoron. Today, these retail meccas are offering exceptional dining experiences to lure shoppers. 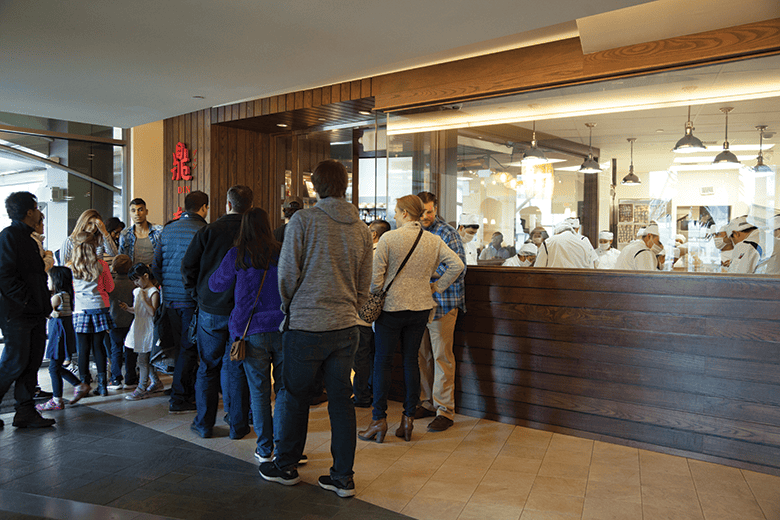 A hungry crowd lines the hallway outside the entrance to Din Tai Fung in Bellevue, some clutching shopping bags; others, designer purses. No one looks particularly irritated. An hour wait seems to be the norm at the wildly popular Taiwanese soup dumpling restaurant, a fair price to pay for a date with a steaming stack of bamboo baskets lined with delicate purses of seasoned porky goodness. For some, Din Tai Fung is the main event, the sole reason they find themselves at the mall this evening.

Not very long ago, “mall dining” was something of an oxymoron. Sure, you could find something to eat at the mall, but a hot slice from Sbarro can hardly be considered dining. Now, restaurants like Din Tai Fung and chef-driven concept spots are drawing customers out of their Amazon shopping carts and into local malls like The Bellevue Collection (including Bellevue Square, Bellevue Place and Lincoln Square) and University Village.

The 2008 economic downturn and continued increase of online shopping has forced malls to reimagine the typical shopping experience for customers. Some malls are curating their dining options to become consistent with what customers are demanding: shopping with a side of chef-driven restaurants serving fresh, modern fare.

In the Seattle area, where many shoppers are educated, well traveled and food literate, they’re looking for restaurants with locally sourced ingredients when possible, and are acutely aware of when gimmicks are a pretense for quality, according to veteran Seattle restaurateur Duke Moscrip, who is opening a Duke’s Chowder House—a Seattle classic that is continually innovating—in the Lincoln Square expansion at The Bellevue Collection this summer.

“Retailers have been forced to put out a better product to attract customers,” says Al Mayes, a longtime retail consultant in the Puget Sound area. Part of that “better product” are the types of retailers, and a huge chunk of this reboot is in the dining portion of the pie.

“They cannot just bring in quality retail with mediocre restaurants. High-quality ingredients reflect the demographic of people who shop at high-end retail,” says restaurateur Eric Bahn, owner of Monsoon and Ba Bar, who is opening another Ba Bar location at University Village this summer.

The Bellevue Collection and University Village are examples of adapting to the times, expanding even as other malls struggle for tenants. And a big part of the expansion has included restaurants.

The Bellevue Collection began thinking outside the food court when it ushered in its first wave of local and national chains, such as P.F. Chang’s, Ruth’s Chris, and McCormick & Schmick’s, in the early 2000s. These restaurants have since been joined by Din Tai Fung in 2010, one of the first United States outposts of the popular Taiwanese chain, and soon will include outposts of local favorites such as Taylor Shellfish, Duke’s Chowder House and chef Jason Wilson’s (Miller’s Guild, Crush) newest project, The Lakehouse, inside Hotel W—which is part of The Bellevue Collection expansion. Wilson plans to give locally grown produce the spotlight, partly as an homage to the agricultural heritage of Bellevue and partly as a departure from meat-centric Miller’s Guild. 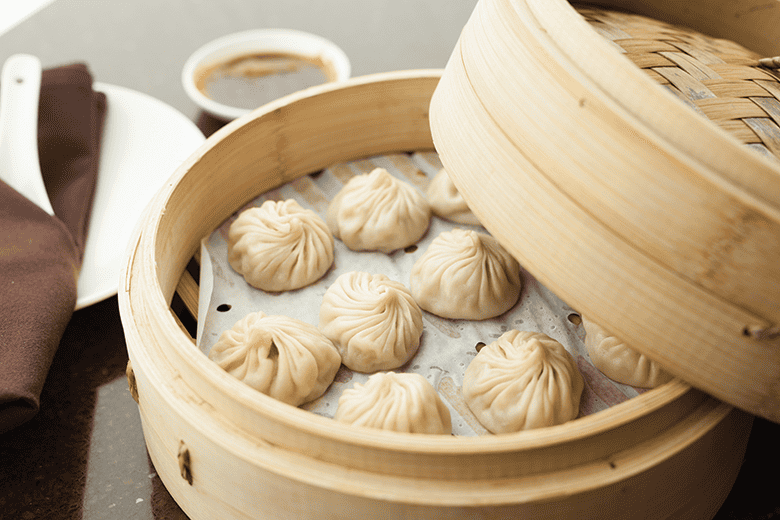 University Village’s open-air setting may differ from The Bellevue Collection, but developers have employed equally successful curating tactics when it comes to dining establishments. Eric Bahn’s Ba Bar outpost, opening soon, will fill a niche for high-quality Asian cuisine. Rachel Marshall, of Rachel’s Ginger Beer, has had her eye on U Village for three years, since just after she opened her first storefront at Pike Place Market. The concept of her U Village location, which is scheduled to open in June, will be similar to her Pike Place store—drinks, cocktails, soft serve, growler refills—and will include a partnership with chef Mark Fuller of Ma‘Ono (customers can expect fried chicken sandwiches with varying levels of spice).

“I focused on U Village because there’s kind of a captive audience,” says Marshall, noting that it’s home to one of the busiest QFCs in the area. “People go to U Village for their daily needs,” she says. So, while the rent is 2.5 times higher than Marshall’s second Seattle location on Capitol Hill, “that buys you 14 million shoppers a year of a certain income bracket.”

U Village is also home to the second Seattle-area Din Tai Fung, and two more locations have opened as well: in Pacific Place and Westfield Southcenter. According to Bahn, those malls are all likely hoping for the “Din Tai Fung effect” to increase traffic.

“Malls rely on walk-in traffic,” he notes, and Din Tai Fung is a big draw. “People don’t need another Italian restaurant. They need something unique, exotic and most importantly, good ingredients.” Din Tai Fung is the kind of place that can increase a mall’s traffic.

No doubt Westfield Southcenter is hoping for a similar effect from the recently opened 85˚C Bakery Cafe, yet another Taiwanese-based chain, known for its sweet confections, such as beautiful cakes and custard tarts, as well as savory mashups, like the calamari stick—a squid-ink-infused bread roll filled with Swiss cheese and topped with garlic spread.

No one ever beat a path to Sbarro in the food courts of yore, but customers are more than happy to wait for a mouthwatering bite at many of the new restaurants in the Seattle-area’s upgraded mall dining scene.