Ever want to eat a scorpion? If not, maybe stick to the scone-flavored treats. 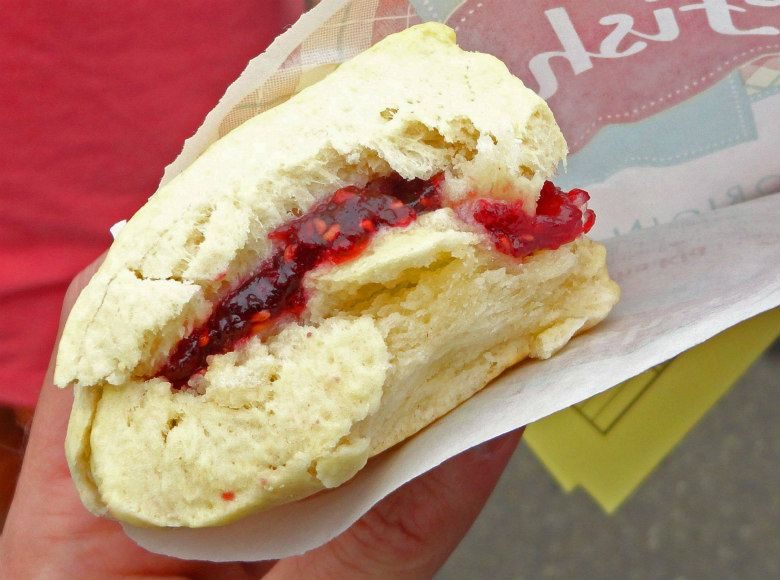 Some of us go to the Washington State Fair for the music (this year you’ll be able to see artists like Steven Tyler and Nickelback). Some of us go for the games and rides (can’t beat that Puyallup Ferris Wheel!). But most of us go to stuff our faces with food we can’t find anywhere else.

This year, alongside fan favorites like the Fisher scones and elephant ears, the fair—which runs Sept. 1-24 in Puyallup—is bringing some new edible delights that will shock and hopefully satisfy. Here are the most notable new yummies worth at least a curiosity order.

Fisher Scone Ice Cream
According to the fair website, 1.6 million Fisher scones with raspberry jam were served to fairgoers in 2015, and they’ve been around since the early 1900s. This year there’s a new variation on an old favorite—Fisher scone ice cream!

The scones are so coveted during the fair, Fisher and fair staff are highly secretive about the ingredients of the new ice cream. “You’ll have to come taste it for yourself,” said Washington State Fair public relations manager Stacy Howard. The scone flavored ice cream will be sold at nine locations throughout the grounds. Keep in mind it will not be sold at the scone booths, though, only the dessert booths that Fisher owns.

Puyallup River Brewing’s Raspberry Scone Golden Ale
If scone-flavored ice cream isn’t enough to satisfy your scone cravings, wash it down with an exclusive raspberry scone beer from Puyallup River Brewing Co. “The way we get the biscuit flavor is by using biscuit malt and aromatic malts to make it sweeter, and there are tons of raspberries in it—just look at the color of it!” founder/brewer Eric Akeson says. The brew is a beautiful magenta will be sold at the End of Summer Bash in the Grandstand.

Watermelon from Stu’s Fresh Fruit
Stu’s Fresh Fruit is one of the best places to stop for a healthy option amid the caloric binge. Get your slices of watermelon juiced and put back in the rind with a straw, right across from International Village. Delicious!

Exotic Meats’ Grasshoppers, Scorpions and Kangaroo Sausage
Brand new last year, this adventurous food booth was the talk of the 2016 fair. Out-there favorites from last year—including alligator burgers, rabbit and python sausages—will return. But this year’s new additions are even more exotic: kangaroo sausage, chili roasted grasshoppers, BBQ crickets and even Manchurian scorpions. You can find the Exotic Meats booth (if you dare) in the International Village building.

Scoops Cookie Dough and Cake Batter
Located near the International Village, Scoops is a new booth this year. Their schtick: serving raw cookie dough and cake batter in a cup. All raw pastries are made with pasteurized eggs and are completely safe to eat raw, as if they were ice cream. Some of the flavors will include chocolate chip cookie dough, peanut butter/Reese’s Pieces cookie dough, s’mores cookie dough, brownie batter, and birthday cake batter.

Sasquatch Grill-Legendary Burgers
Stop by Sasquatch Grill to get their popular heart attack specialty—the bacon-stuffed burger loaded with pulled pork, coleslaw, pickles, onion rings, BBQ sauce—or try the Cheesy Philly Burger, a cheesesteak/cheeseburger hybrid topped with nacho cheese, caramelized peppers and onions, green chilies, provolone. Sasquatch Grill is taking over the food booth that used to be Cowgirl, down on the south end of the grounds by the End Zone Bar.

Hawaiian Grindz & Lumpia
Polynesian food is having something of a minor moment and the fair is devoting an entire booth to island eats. Look for pork lumpia, adobo pork sliders, chicken katsu with fried rice and Spam kimchi with fried rice.

Fiesta Mexicana’s Mondo Burrito
There’s not much to say except that Fiesta Mexicana will now have a burrito the size of a newborn baby: 15 inches long and three pounds. If you’re really hungry, you can get the appropritely named Mondo Burrito near International Village.

Paella Pro
New this year will be another healthy-yet-festive option, perfect for those with dietary restrictions. Paella Pro prides themselves on ethically sourcing their ingredients for the paella it makes from scratch. They’ll peddle mixed paella with chorizo sausage, chicken and shrimp; lamb with white beans and Moroccan seasoning; and a vegan option with mushrooms, Kalamata olives and garbanzo beans. Look for Paella Pro in the International Village.