Razor clams are a Washington essential, though we'll let someone else dig them up. 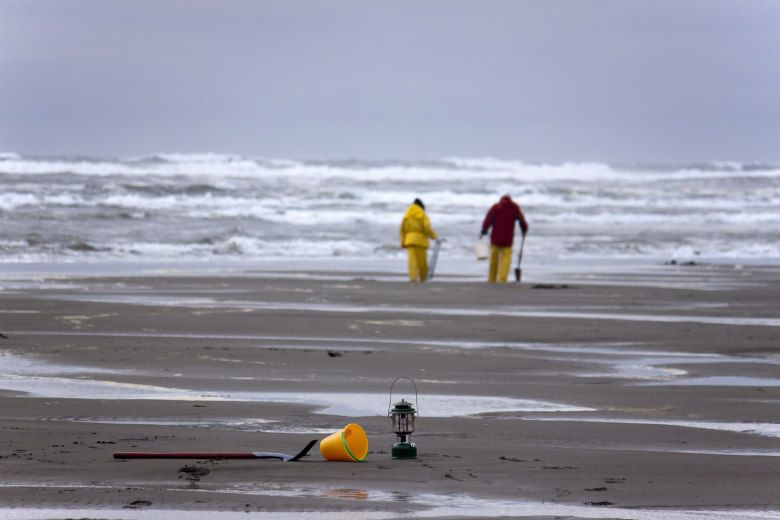 On an early October Saturday, I was walking at Seward Park and happened to bump into author David Berger (no relation) who was about to give a talk on razor clams at the Seward Park Audubon Center there. Bivalves, not birds!

It wasn’t in my weekend plans to attend, but razor clams are irresistible. Their lure is enough that Berger has written a book about them, “Razor Clams: Buried Treasure of the Pacific Northwest” (University of Washington Press, $26.95).

I’m not much of a clam digger, more of a shell or agate hunter-type beachcomber. But a trip to the coast isn’t complete without getting razor clam chowder or, better yet, razor clams and eggs for a pre-beach breakfast. The clams are some four to six inches long with flat golden-brown shells and a “foot,” smaller than the geoduck’s more phallic-like appendage. The protuberance is the clam’s only defense. They can dig down in the soft sands at great speed.

You wouldn’t think that hunting clams required an ability to overcome a shellfish’s speed, but they can flee and can dig as many as four feet down. Humans aren’t their only predators. Berger told us that shorebirds feed on them if they can catch them unawares near the surface.

Berger told us that our species of razor clams exist only on the great sandy beaches of Oregon, Washington and Alaska. They are mainly a recreational activity for humans these days. Razor beaches have cool names like Willapa Spit, Mocrocks Beach, Whiskey Run Beach and North Umpqua Spit.

Hundreds of thousands of people in Washington dig for them every year (limit of 15 per digger). It’s one of the last wild critters people of all ages can forage for in quantity, he pointed out. Wild is hardly a term one thinks of when looking at a quiet clam, but razor clams are not farmed like oysters or mussels.

But unlike they were for Native Americans, early pioneers and folks during the Great Depression, the clams are not really part of a subsistence diet anymore, except the diet of tourism promoters in places like Long Beach or Ocean Shores.

Berger said there used to be a large commercial clam industry with millions of them harvested, canned and sent around the country. In 1915, 21 million clams were commercially harvested here. Now most are dug for private consumption, though a small commercial Native American harvest survives.

Razor clams can only be found at very low tide, which can occur at inconvenient hours in the pitch dark. Digging tools are simple. A narrow shovel and a bucket or net to put the clams in is all you need. A guy from Shelton invented another device, a plastic tube that is inserted into the sand. You pull up the tube filled with sand and dump it out, and if you’re lucky or skilled, you might have a clam without the back-breaking shovel work.

The thing is, if you didn’t like clams before, by the time you wade into cold waters at 2 a.m. (the next dig dates are likely in December), dig up a dozen or more clams and haul them back up the beach, you’ll be hungry enough to eat them. They are one of the Northwest’s ultimate buried culinary treasures. As much as people enjoy the hunt, I prefer just finding them on a true Northwest menu.