Local distillers are taking advantage of our state’s bounty by producing an array of fruit brandies. 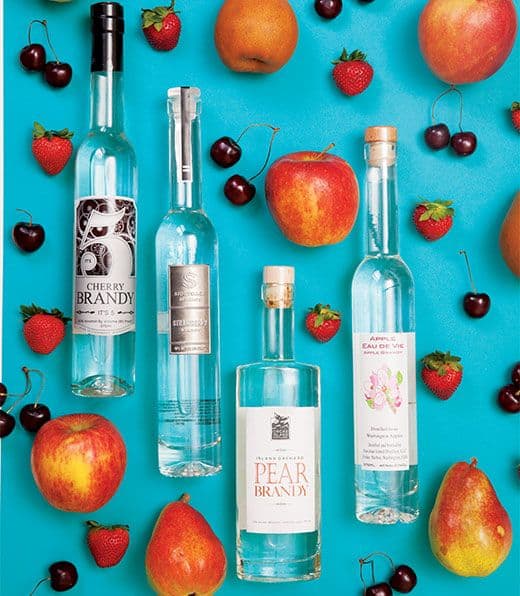 Eau de vie. When spoken aloud, the phrase has a delicious poetry, one that’s underlined by its English translation: water of life. For the uninitiated, that water usually refers to clear, unaged fruit brandy. What many of us usually think of as brandy is a spirit created by distilling wine made from grapes and aging it in casks. Eaux de vie, on the other hand, are made with fruits other than grapes.

In towns throughout Europe, making fruit brandies is a vibrant part of life. In the Northwest, Portland’s Clear Creek Distillery has made early inroads with its pear and other fruit brandies. But this style of brandy is now being made in Washington state as well, with distillers starting with our state fruit, the apple. For Suzy and Hawk Pingree and Rich Anderson, owners of San Juan Island Distillery, it began when they fell in love with Calvados (the French aged apple brandy). To make this style of brandy, they first make unaged brandy, or apple eau de vie; they now sell both versions (as well as an award-winning apple cider). At Orcas Island Distillery, the path to making fruit brandy started when a friend invited distiller Charles West to pick apples in one of island’s old heritage orchards. The distillery now produces both apple and pear brandies.

But it’s not just about apples and pears! You’ll also find brandy made with berries, plums, cherries and other fruits.

What drove distillers to enter the fruit brandy business? Making this style of brandy is another tasty way to deliver the state’s fruit to consumers. “We are located in an area that has all kinds of fruit growing,” says Colin Levi, owner of It’s 5 Artisan Distillery in Cashmere, where they make a whole orchard of different fruit brandies. “It was only natural to focus on brandies.” Sidetrack Distillery, just outside of Kent, crafts three brandies from heirloom fruit it grows on its Lazy River Farm. “These brandies are delicate examples of the fruit from which they are produced,” says Larry Person, who owns the business with two partners.

Don’t confuse these brandies with their sweeter cousins, fruit liqueurs. Fruit brandy has nothing added: no sweetening agents, no flavoring or coloring agents. They are straight spirits, like regular vodka. This makes for a strong sipper (most are 80 proof) that is crisp, with the pure, expressive essence of the base fruit that you can’t find in anything else.

Local bartenders, who are always in search of the next innovative cocktail ingredient, are finally taking note. But I still contend that these brandies are unsung heroes that make fine sippers on their own. They also share an all-American pedigree. Our Colonial ancestors brought the fruit brandy tradition from their native countries and made and consumed these spirits in their new home. The practice died down during the temperance movement and Prohibition, as well as in the last century, as the American palate developed a predilection for sweetness.

But with distillers now crafting top-shelf fruit brandies, that’s changing. Go to the distilleries, chat about fruit brandies with the staff, sample a few. Once you try a fruit brandy after dinner (a typical way to enjoy it) or mixed into a cocktail, you’ll see why they’re considered vital in many countries. In the same way that there’s been a renaissance in beer, wine and cocktails, the renaissance of eaux de vie is coming. If you start now, you’ll be ahead of the crowd.

When sipping fruit brandies, first try them at room temperature in a brandy snifter or a tulip-shaped glass, which helps the aromas flow up into the nose. But on a warm day, enjoying a well-chilled fruit brandy (either put a bottle in the freezer or pour the brandy over a little ice and stir) as the sun goes down is exquisite. These brandies also make great bases for cocktails (see below). Pick up our favorites at the distilleries or check stores such as Total Wine and More and Downtown Spirits.

Made from apples grown in the distillery’s island orchard (some of the same apples used to make its award-winning cider), this fruit brandy is clean in taste—with hints of apples on the nose and the tongue from start to finish—yet gentle, generating visions of apple trees and an orchard in fall. It’s good in cocktails like the Kallisti Wedding (see recipe at seattlemag.com). The distillers also age it for at least three years in oak barrels to make their award-winning Calvados-style brandy. Friday Harbor, San Juan Island, 12 Anderson Lane; 360.472.1532.

As with all Sidetrack products, the fruit in this brandy is grown on the distillery’s farm outside of Kent. And while Sidetrack makes plum and award-winning raspberry fruit brandies, I like its strawberry best (its distillers are experimenting with their other fruits, too). The smell of this brandy is so enticing, and the flavor embodies the essences of strawberry and summer, while the underlying potency of a pure spirit is maintained. Try it alone, or in the Larrexander, a cocktail inspired by the classic Alexander (see recipe at seattlemag.com). Kent, 27010 78th Ave.; 206.963.5079.

The distillery’s award-winning apple brandy, made from heritage apples, is well worth trying, but I’m highlighting the pear because there are so few truly great pear brandies; finding them is an occasion to savor. Made from heritage pears hand-picked in island orchards, this brandy has a dry and pure pear nature. It was created in distiller Charles West’s barn, which was built from wood milled on his property. Once you’ve sipped this brandy neat, try subbing it for regular brandy in an elegant sidecar with Cointreau and lemon juice. Orcas Island (distillery visit by appointment only); 360.376.7077.

Cherry brandy gets a bad rap, as there are too many sugary, dreck-filled bottles labeled with that name. But this is the true stuff, pure and natural. Made from Bing cherries, it has an opening salvo of fruit and nuts, with a soft, tantalizing cherry finish. It plays nice when mixed with rums and pineapple juice in the Lazy Afternoon, a recipe I discovered on the distillery’s website. This distillery also makes apple, pear, Italian plum, pluot, apricot and nectarine brandies, and just released a 4-year-old brandy. Cashmere, 207 Mission Ave.; 506.679.9771.