After disappearing from the market for years, a special kind of seafood makes a triumphant comeback 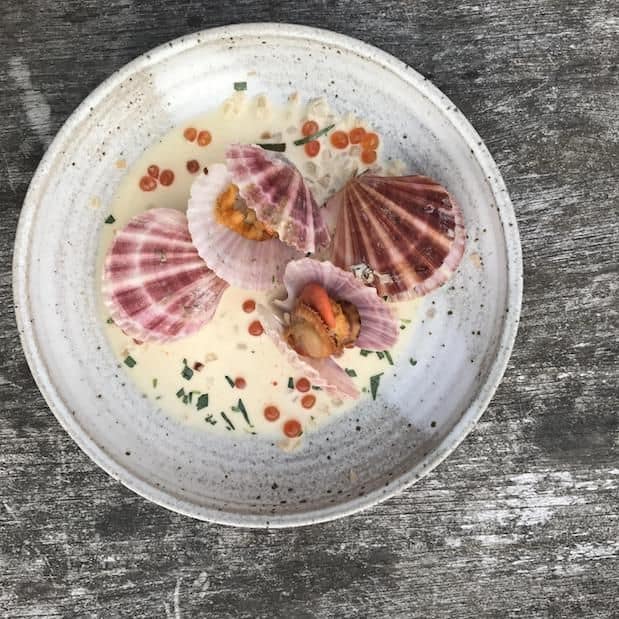 It was around 1993 or 1994 at The Herbfarm (where Poppy/Lionhead chef Jerry Traunfeld was then in the kitchen) when food writer Sara Dickerman found The Birth of Venus in her seafood chowder. As Dickerman remembers it, she was picking shellfish out of a “super elegant” tarragon broth when “there was this beautiful scallop shell just looking like the Botticelli painting.”

The Venus on the half-shell was actually a pink scallop, Dickerman’s first, and it immediately became a symbol of Seattle for her. In fact, the tiny bivalves—a dollop of meat no bigger than a quarter sits in a pastel-colored shell about three inches across—with their endemic harvest, striking appearance and variegated flavor, had become a symbol of Puget Sound’s singular seafood scene.

First found in the 1980s by divers scouring Puget Sound for sea cucumbers and urchins, pink scallops—also called singing scallops or singers—exist in Pacific waters from California to Alaska, but only reach harvestable populations in the Salish Sea’s cold, high-current channels, where they pop around feasting on plankton flush.

Chefs and food lovers swoon over what they see as a perfect balance of multiple shellfish flavors in one small package: a less-sweet sea scallop with a hint of the clam’s nuttiness and a pinch of oyster brine. It all adds up to the taste of “sweet sea,” according to Eden Hill’s chef/owner Maximillian Petty. It also adds up to a tendency to provoke infatuation.

By the 1990s, from restaurants to seafood counters, pink scallops “just seemed to be everywhere,” according to Dickerman. That is, until they disappeared completely—Dickerman moved to California for a few years, and when she came back to the Northwest the scallops had vanished.

One fateful night in 2010 at The Willows Inn on Lummi Island, Dickerman ran into Nick Jones, the proprietor of Jones Family Farms on Lopez Island and a local food producer known for his insight and tenacity. “Whatever happened to pink scallops?” Dickerman asked Jones. She piqued the interest of the right person. Jones, who is “prone to falling in deep on things,” Dickerman says, got to work investigating. He found out that the pink scallops disappeared from the market for nearly two decades because of a fairly simple reason: They are very difficult to harvest.

“They live in high current areas, so it’s extremely challenging from a diving standpoint,” says diver-master Joe Stephens, who partnered with Jones to bring the fishery back. “I have an extremely difficult time finding divers who can hack it.” But even after Jones and Stephens found capable divers willing to descend 60 to 120 feet into the cold, ripping channels and gather the scallops, there was another ensuing battle. When Jones told the state he wanted to bring the harvest of Chlamys rubida back, they shut it down. A muddled regulatory battle involving certified water, diarrhetic shellfish poisoning, fecal coliform and a ton of paperwork followed, stretching out for over six years before Jones Family Farms made their first delivery this February.