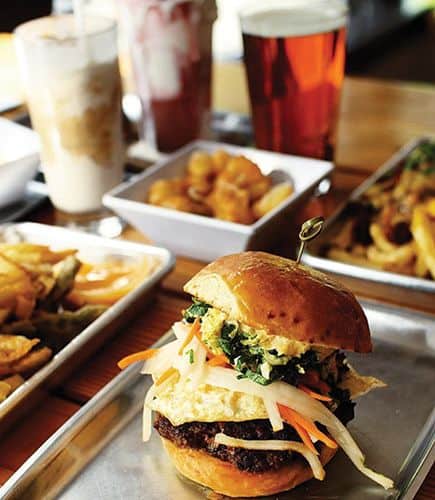 What does a chef with a fine-dining background do with a burger place? Chef/owner Scott Staples gave us Quinn’s, the Capitol Hill gastropub he calls the first in the city, in 2007; and Uneeda Burger, the family-friendly Fremont spot in an old garage, in 2010. He continues to reinvent the burger at Feed Co., which opened in Redmond in July 2015, and now has a location in the Central District.

But as it turns out, reinvention isn’t the point. Feed Co. is so similar to Uneeda that Staples himself has a hard time articulating the differences. (He used the name Feed Co. rather than Uneeda because the latter is so closely tied to the singular Fremont location.) Both spots offer counter service with extra attention. The burgers aren’t fussy: The classic ($5) is just that, and includes that awesome mayo-Dijon-lemon sauce from Quinn’s. There are specialty burgers not offered at Uneeda. Try the moist turkey burger with bacon and avocado ($10) or the Asian-inspired Bim burger ($9), perked up by kimchi aioli. If you’re a fan of Staples’ burgers elsewhere, you’ll be a fan here too. Central District, 1190 24th Ave.; 206.726.6000; feedcoburgers.com