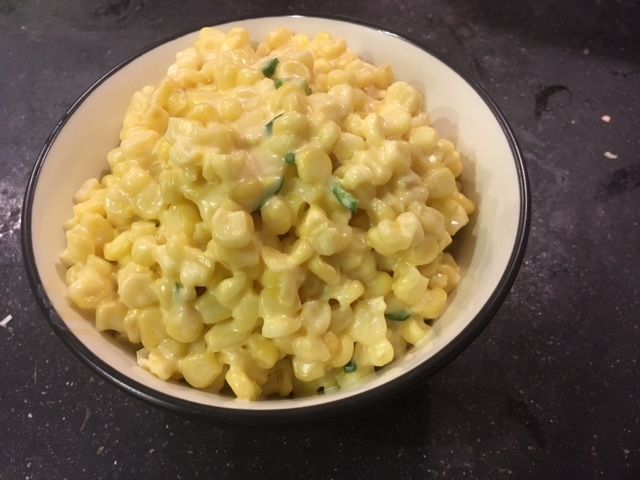 Comfort food takes many forms. That satisfying combo of sweet and savory are almost necessary. Plenty of cheese doesn’t hurt. Now here’s a recipe that hits on all the best elements of comforting cuisine, plus a little Serrano chili for heat.

Casco Antiguo is a Pioneer Square Mexican restaurant best known for its 30-ingredient mole. But it’s this modest corn side dish that’s a favorite among regulars. Owners say it’s a play off a traditional Mexican street food called” ezquites,” where corn is boiled with epazote and butter, then served in a disposable cup with cheese, salt, lime, chili powder and mayo.

Since it’s damn hard to find fresh corn this time of year, so I used all frozen, and I think the flavor was still good. If you don’t have crema on hand, I used sour cream in a pinch—it was firmer than crema, but I think leant a similar flavor. I used a whole Serrano and was disappointed in the lack of heat, though that’s a fault of the pepper and not the dish. Perhaps leave the seeds in if you want it a little hotter (I will next time). At the restaurant, it’s served alongside everything from braised pork cheeks to baby octopus—I think it would be a great with a Southern-inspired barbecue feast as well.

In a large sauté pan on medium heat, add canola oil and raw corn. Sauté for two to three minutes. Add the thawed corn, chopped peppers, salt and pepper. Sauté until corn and peppers are tender. Fold in the cream cheese until corn and peppers are thoroughly incorporated. Whisk in the crema Mexicana until the dish becomes creamy in texture. Add the Monterey cheese and continue to whisk until the cheese is melted and the dish is smooth and saucy. Remove from heat and let stand 10 minutes before serving.