A hot new twist on an icy island favorite 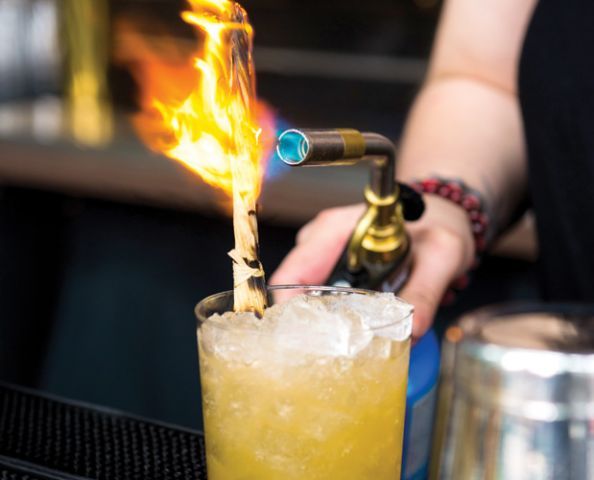 DRINK HISTORY
The origin of this cocktail, which translates as “corn and oil,” is hard to determine, but it can be traced back to the island of Barbados. It’s traditionally made with thick, dark, blackstrap rum, or another type of well-aged island rum. You’ll see a twist on that in Noroeste’s Masa y Aceite, for which lead bartender Cara Stuber (formerly at fellow Huxley Wallace joint Quality Athletics as well as La Carta de Oaxaca and other establishments) uses a mix of four rums from around the world: two rums from Ron Cartavio, Old Monk rum and Hamilton Black rum. The other key to the drink is Falernum, a lime-and-spice liqueur also originating in Barbados. It’s house-made at Noroeste, with ginger, allspice and nutmeg, along with citrus and a syrup made from cornhusk stock. The end result retains the echoes of the island original, but is a bit lighter overall. It’s a refreshing getaway in a glass for the after-work crowd, from Amazonians in the upstairs “Doppler” building to construction workers who are building the retail giant’s towers nearby.

THE TWIST
While it’s hard to pin down the “corn” in the original corn and oil (the oil is thought to refer to the dark rum), this Masa y Aceite makes defining it easier, thanks to a cornhusk that’s lit on fire and then used as a stir stick. The charred corn aroma and the smoke mingle in a lovely manner with the lush tropical taste of the drink. This creativity matches Bar Noroeste’s Latin-inspired cuisine based on Northwest ingredients. I’d have this drink with tacos: the veggie version with foraged local mushrooms, mole and just enough spicy peppers would be perfect. The drink’s playfulness—the fire is thrilling—combined with its approachable, affable nature mirror the spirit of the bar’s staff, which is one of the friendliest in town, led by floor manager Alex Walsh (who might just pour Cava straight into your mouth from a Spanish porron-style decanter).

THE TOOLS
Served in a wide-mouthed, light but sturdy old fashioned style of glass, this is a drink that’s fairly easy to craft at home. (The Falernum takes a little time if you want to make your own, but isn’t difficult.) However, it does involve lighting a cornstalk on fire, so you’ll need to be careful. Unless you have a propane torch, as the bar does, I suggest using a long-stemmed butane lighter for safety.

»Place everything but the husk into a cocktail shaker. Shake well.
»Fill an old fashioned or similar style of glass three-quarters full with ice cubes.  Strain the mix through a fine strainer over the ice and into the glass.
»Carefully light one end of the cornhusk on fire. Let it burn for a second or two and then blow it out. Dunk the charred end into the glass and stir briefly.
»Again, carefully light the other side of the husk. Let it burn briefly, then blow it out and place back in the drink.

Note: You can use a number of good Falernums available in liquor stores, or find the recipe for Bar Noroeste’s delicious house Falernum online at seattlemag.com/recipes.