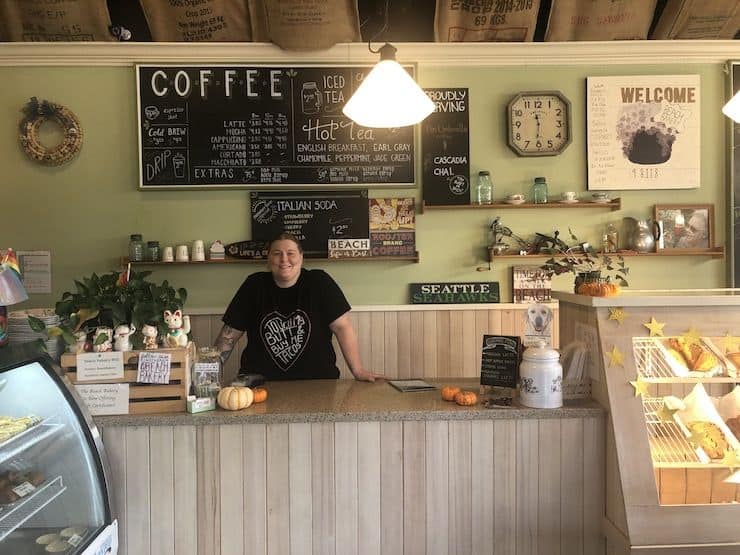 At Beach Bakery, behind a glass case full of scones and muffins, a sign on the wall welcomes patrons in more than a dozen languages. Tiny rainbow flags sit in centerpieces on the Rainier Beach café’s tables. The patrons—alone, or in groups of two, nibbling at baked goods and sipping coffee roasted by nearby Tin Umbrella—are chatty and complimentary.

All this is indicative of the kind of place owner Amy O’Connell wants to run: inclusive, communal, full of love—and lots of butter.

O’Connell opened Beach Bakery in the spring of 2016. She grew up in the neighborhood just a mile or so away; in fact, her parents just sold their home of 40 years to downsize into something smaller near her current place in South Park. They’re a big part of her business—Mom makes the soup you’ll find in the refrigerated case near the front and Dad helps out in plenty of handy ways.

“We didn’t have anything like this when I was a kid,” she says, adding that birthday cakes only came from the nearest Safeway. “My favorite thing now is when people come in and see their neighbors. It’s still very much an old Seattle community down here. People look each other in the eye and say ‘hello’ down here.”

O’Connell says change has come to the neighborhood—the bakery is in one of the most diverse zip codes in the country, she says—but she’s constantly inspired by the community organizations and resident families. In fact, the bakery pulls out all the stops for local cultural festivals, experimenting with ingredients ranging from tahini to ube to red bean paste. “Food is the way that everyone connects,” she says. “It’s so cool to have so many cultures connect with each other in one place.”

Though O’Connell loves the chance to play with a new ingredient, the menu at Beach Bakery taps largely into American nostalgia—favorites include a PB&J cookie bar and carrot cake (her grandmother’s recipe) with cream cheese frosting. She says she loves cookie boxes for Christmas and pies for Thanksgiving. One of her personal favorite pies is sweet potato, a recipe she developed to make not for the holidays but for a friend who absolutely loves sweet potato pie on his birthday.

1. Make your favorite pie crust recipe, roll out and set into a 9-inch pie tin.

2. Preheat oven to 350 degrees. In medium bowl, mash sweet potatoes. Whisk in both sugars, eggs, evaporated milk, spices and vanilla. Pour into pie shell and bake for 30-45 minutes, or until filling is set. (Oven times may vary.)