Sugar and spice and everything nice at a dozen new bakeries. 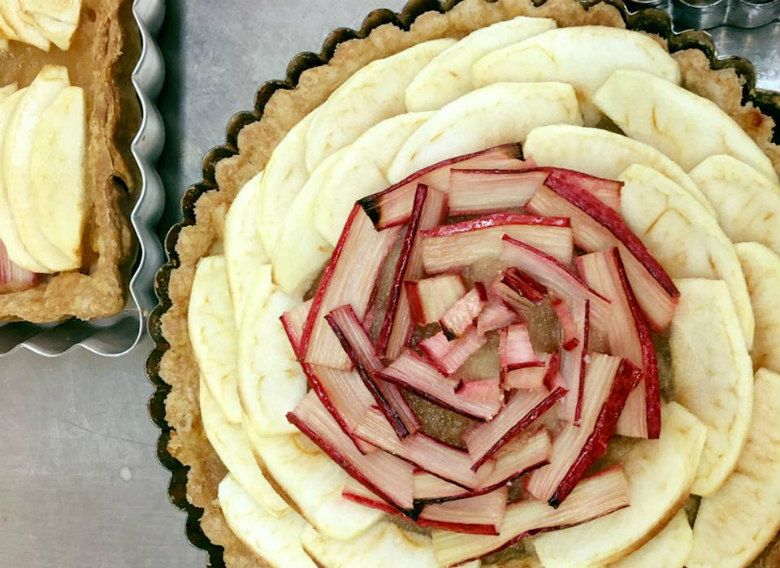 Let’s cut right to the point: I like baked goods. You like baked goods. And there are so many new places to eat them that it’s kind of making our heads spin (in a good way, obviously). So let this list of new—in the last six months or so—bakeries guide your cheat-day decisions for the foreseeable future. In no particular order:

Bakery Nouveau
The biggest news here is that this stalwart of the local bakery scene just opened their biggest location to date: a 7,500-square-foot café in Burien with indoor/outdoor seating for more than 30 people (still, not enough). The lines are still long, the croissants are still huge, but now there’s an expanded chocolate-making facility that you can peep through a glass square in the floor.
Order: The twice-baked almond croissant.
Burien, 426 SW 153rd St; 206.717.2100; bakerynouveau.com

Standard Bakery
We wrote up a full recap of this new Pinehurst shop here, but the gist of it is that owner Josh Grunig used to run the production kitchen at Grand Central and now he’s making all kinds of croissants and cookies for coffee shops all over town. Now, though, instead of a strictly commercial kitchen space, he’s got a walk-up window where you can buy his delicious goods to go.
Order: The cornflake-marshmallow cookie.
Pinehurst, 11752 15th Ave NE; 415-385-1379; standardbakeryseattle.com

Damsel and Hopper Bakeshop
This new self-proclaimed “micro-bakery”—so twee—is an obviously tiny operation that’s made a name for itself at farmers markets around town. But now that they’re up and running in a Wallingford storefront, you needn’t wait for market day to get beautiful loaves of freshly baked bread and rustic pastries like Danish with seasonal fruit. Sign up for the weekly bakery box and get these goods delivered to your door.
Order: A loaf of challah, which they just started making at the beginning of the month.
Wallingford, 4405 Wallingford Ave N; damselandhopper.com

R & M Dessert Bar
While not technically open yet, this late-night Capitol Hill dessert shop is aiming for a Nov. 1 opening, and you’ll want to be there as soon as the gorgeous tarts are available for sale. It’s not just the tarts, though—owners Rod Gambassi and Marc Adams will be whipping up everything from savory small bites to ice cream sundaes to all manner of cakes and quick breads and even really delicious popcorn.
Order: The key-lime tart.
Capitol Hill, East Pike Street and Belmont Avenue, rmdessertbar.com

Cakes of Paradise
This delightful family-run business has long flown under the radar of many Seattle foodies—it’s deep in Georgetown, and unless you’ve tried the thick cake slices with fluffy frosting at one of their wholesale clients like Kona Kitchen or Uwajimaya, you may not know how delicious a Hawaiian cake can be. But now that their expanded café opened about six months ago, we’re shouting our love from the rooftops.
Order: The guava cake.
Georgetown, 6322 6th Ave. S; 206.763.1151; cakesofparadisebakery.com

Celine Patisserie
Beautiful pastries and European-style cakes are both available at this new café on Phinney Ridge that took over the former Picnic spot (R.I.P.). The couple running the place is new to Seattle—so new they moved here explicitly to open Celine—so stop in and say hi, pick up some colorful macarons, and let them know the Seattle Freeze is not a real thing.
Order: The seasonal fruit galettes.
Phinney Ridge, 6801 Greenwood Ave. N; 206.466.5378; celinepatisserie.com

85°C
First open at Southcenter mall in February, this Taiwanese chain with a cult-like following now has a Lynnwood location open last month. Both places are bright and modern and filled to the gills with serve-yourself pastries from tiny tarts to taro buns to savory breads, plus stunning cakes (whole or by the slice) in a glass case. Don’t miss the sweetened iced coffee with a sea salt cream on top.
Order: The Hokkaido cheese tart (like a cross between cheesecake and an egg tart).
Lynnwood, 18700-A 33rd Ave. W; 425-672-2885; 85cbakerycafe.com

Deep Sea Sugar and Salt
Now that her Kickstarter campaign’s been fully funded, baker Charlie Dunmire doesn’t have anything stopping her from opening the brick-and-mortar version of her popular cake shop she’s been running out of an Airstream trailer in the Georgetown Trailer Park Mall on weekends only. In early 2018, she’ll be settled into her new home at the Carleton Avenue Grocery, and you’ll have more regular access to her ridiculously delicious (and really lovely) layer cakes.
Order: A slice of London Fog.
Georgetown, 6601 Carleton Ave. S; 206.330.5110; deepseasugarandsalt.com

Raised Doughnuts
These innovative doughnuts are currently available in pop-up form only (most recently with fellow social media darling Matcha Man Ice Cream Co.), but follow Raised—we’re expecting big things (and an actual location) from owner Mi Kim based on the popularity of her scratch-made doughnuts. Look for a November 18 pop-up at U-Village.
Order: The grapefruit brulee doughnut.
raiseddoughnuts.com

Lowrider Baking Company
Love this cookie business first because it’s named after a pair of dachshunds and second because the chewy cookies make a mean ice cream sandwich at Full Tilt—where you can reliably find them, alongside farmers markets south of the city. Flavors are all a little twist on the ordinary, like banana maple toffee and Pillow Mint (with Andes mints).
Order: The birthday cake (cookie, that is).
lowriderbakingco.com

Cubes Baking Co.
The gimmick here is that all the cakes and cupcakes are cube-shaped. A little outside the box, so to speak, but this Wallingford spot has already earned a loyal following, particularly for the Mexican-inspired goods from seasoned pastry chef/owner Kevin Moulder’s hometown of San Antonio. Look for the likes of tres leches cakes, colorful conchas, Mexican wedding cookies, etc.
Order: A slice of horchata tres leches.
Wallingford, 2315 N 45th St.; 206.257.4299; cubesbaking.com

Café Besalu
To make this an even dozen, I’m happy to report that I recently returned to Besalu after its sale to Herkimer Coffee, and it’s just as enjoyable as always. I haven’t yet been back to Crumble & Flake after its sale, but I’m keeping my fingers crossed.
Order: The ginger biscuit. Still the best.
Ballard, 5909 24th Ave. NW; 206.789.1463; cafebesalu.com