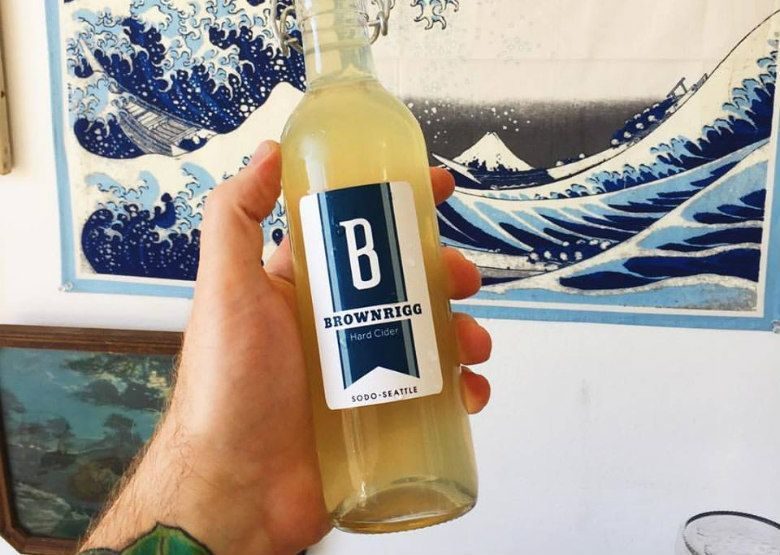 SoDo is rapidly becoming an adult-beverage paradise, with distilleries, breweries and wineries calling the neighborhood home. Brownrigg Hard Cider is the latest to join the party, opening its tasting room in late September. It sits in part of the 3 Howls Distillery space at 426 S Massachusetts St., in the shadow of Safeco Field.

Owner and cidermaker Chris Brownrigg has made cider as a hobby for 10 years, but after a trip to England where he tried some amazing U.K. ciders, he retired from Boeing to do it full time. While our cider industry is exploding in a wonderful way—paralleling our spirits industry—Brownrigg is creating noteworthy flavors that should help him carve out his place.

His most-requested so far, for example, is a cherry cardamom cider. Like all his current ciders, it’s apple-based, using apples come from the Yakima area. (Besides hops, apples used in most local ciders hail from the region.) But he also grows some of the apples and other fruits and botanicals himself on his 6,500-square-foot property in West Seattle. He has over 40 fruit trees, plus grapes, figs, kiwi berries, currants, strawberries and even hops. The latter are used in Brownrigg’s Cascade Hopped cider. It’s crisp, charming and lightly hoppy—a cider to savor as the sun sets on a bright fall day.

Like the cherry cardamom, Cascade Hopped is based on his flagship Unfiltered Dry cider, available year-round. Unfiltered Dry has a fresh, clean personality—a far cry from the sickly sweet ciders that once packed local shelves. It’s also the base for his seasonal fig leaf cider, made with the outsized leaves of his own Desert King fig trees, turned into fig simple syrup. The cider was still nicely dry, with a wispy fig smell and taste.

Beyond the flagship dry, his Sidra is also available year-round. Based on the Spanish and Portuguese ciders it’s named after, Sidra is aged four and a half to five months with three different types of oak. A totally still cider reminiscent of an earnest white wine, it has higher tannin and a savory finish.

As you can tell, Brownrigg isn’t afraid to experiment. I tasted a singular, herbaceous limited-release amaro cider aged in a cask Il Corvo used for their house amaro. He also has a New England-style cider, higher in alcohol, with grapes and a hint of maple syrup for the chillier months. A gin cider made with 3 Howls gin and other varieties are on the way. His passion for cider is obvious and he has food pairing ideas for every cider, too.

The tasting room is currently open on Sundays from noon to 6 p.m.—ideal for tailgating before Seahawks games and other SoDo sporting events—and you can pick up growlers there. Plus, you’ll discover it at Cafe Pettirosso and soon at other bars.