By Chelsea Lin and Dan Shafer 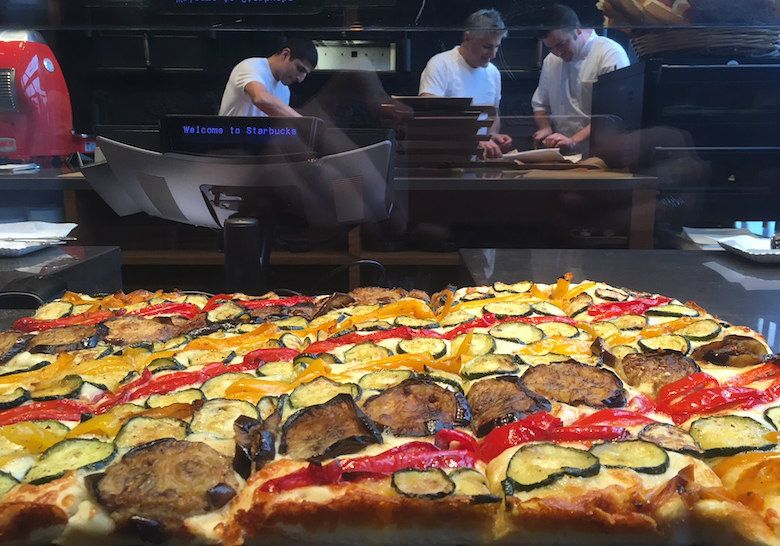 Three black Wenz deck ovens along the back wall are the focal point of the space, which sits next to the Roastery and shares the same copper-and-wood aesthetic. Those ovens are on all day, cranking out cornettos—the Italian version of a croissant, here light as air and beautifully lacquered—in the morning, thick square slices of pizza at lunch and pretty desserts in the early evening, to pair with an Aperol spritz. Besides the 100-odd menu items, guests will also have the option to buy fresh loaves of bread (around $8) to take home.

There’s a big focus at Princi on the theatrical element of a bakery: those smells and sights that draw you in and captivate attention. But having sampled our way through the menu, we can verify that the goods are worth the trip.

Owner Rocco Princi is a charming, silver-haired Italian baker who turned very humble beginnings into five uber successful bakeries in Milan and one in London. His enthusiasm for baking is infectious—the Italian accent doesn’t hurt. Princi has hand-picked every ingredient in every menu item, and is insisting on flying in more than 50 ingredients from Italy that can’t compare with what we’ve got here, like prosciutto from Parma and San Marzano tomatoes from Campania.

These Princi-made baked goods won’t show up in your neighborhood Starbucks (don’t worry, your breakfast sandwich isn’t going anywhere), but will definitely be a part of future Roastery openings. We’ve also been assured that there are no hard feelings with Tom Douglas—after all, his Serious Pie shop occupied the space before Princi moved in. From the sounds of it, Douglas wanted to stay loyal to his focus on Seattle, and they needed someone willing to explore global openings with a Starbucks partnership. Go brave the lines, and make sure you get an $11 slice of Princina, perhaps the most decadent chocolate ganache tart we’ve ever experienced.

For now, the Princi menu will only be available at the Roastery in Seattle. But that’s changing quickly. Starbucks’ Roastery brand is growing, and Princi is coming with it.

Last July, Starbucks announced that it would become an investor in Princi, aiming to expand it far beyond its five locations in Milan and one in London, without actually acquiring the business outright. Next up after the Seattle Roastery is a location are new Roastery locations Shanghai (opening in December), followed by locations in New York City (in the Meatpacking District), Tokyo, and Milan in 2018, and in 2019 on Chicago’s Magnificent Mile.

As these new Roastery locations open, Princi will be the exclusive food provider. Starbucks will also help open standalone Princi restaurants, with yet-to-be-announced locations set to be opened in 2018.

Rocco Princi said that before entering this deal with Starbucks that he turned down lots of other offers, including ones from other coffee companies. He said it was the “same vision” he shared with Starbucks founder and executive chairman Howard Schultz that ultimately made the difference.

The first step in the partnership begins in earnest today, and the 2,000-square-foot “Princi at the Roastery” will officially be open to the public. It’ll be big enough to seat 60 people in the dining area, and another 20 people at a bar that will serve cold brew along with select wine and spirits.

Keeping with Princi’s traditional style, patrons will not be making their selections off of a printed menu, but instead will be greeted a “commessa” to guide them through their dining experience.