A Summery Spin on a Potent Classic at Brimmer & Heeltap

The Ballard bistro pours out a 'Corpse Reviver' twist 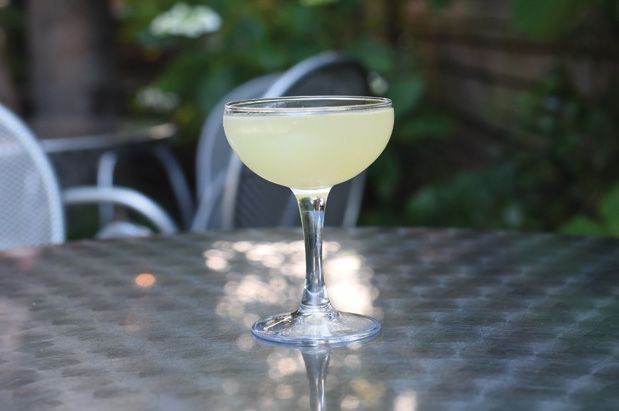 The Cocktail: Porch Reviver
Originally conceived as a hangover cure with a kick, the Corpse Reviver family of drinks—potent cocktails with a mix of liquors—have faded into history. There are only two recipes surviving today: the rare cognac-based Corpse Reviver No. 1 and the more fashionable gin-based Corpse Reviver No. 2, which features Lillet (originally Kina Lillet, which is no longer available), Cointreau, lemon juice and absinthe. Substituting Cocchi Americano (an Italian aperitif closer in flavor to Kina Lillet), and smoky mezcal for gin, lime juice for lemon, and adding a dose of the trendy and tasty Ancho Reyes ancho chile liqueur updates this classic. The tang, smoke and hint of spice of the Porch Reviver, named after Brimmer & Heeltap’s back patio, makes for a memorable sipper when the rays are bright and the mercury is rising. Too often we consider only tall, bubbly drinks when the heat is on, but for me, the flavors are a match for the season: The smoke of the drink echoes the smoke of outdoor cooking, and the strong lime tang evokes memories of sunshiny Seattle beaches in August.

The Restaurant: Brimmer & Heeltap
Since opening in 2013, Ballard bistro Brimmer & Heeltap (the name comes from two English phrases: the first referring to an overfull glass, and the latter being the final drops before the glass is empty) has developed a loyal following of customers, who enjoy chef Mike Whisenhunt’s creative Northwesterly cuisine and the lovely, airy space. And during sunny months, the back patio—tucked away, with its bistro tables, blooming flowers and fire pit—makes a swell and popular spot for sipping drinks. On the way home from work, duck in for a cocktail and snack, such as the exceptionally thick-sliced grilled bread or lush English pea hummus. Ballard, 425 NW Market St.; 206.420.2534; brimmerandheeltap.com

The Bartender: Nick Barkalow
Tall, mustachioed bar manager Nick Barkalow, fairly recently transplanted from Colorado and previously at La Carta de Oaxaca, shares a full helping of friendliness as he works behind the stick and chats with customers. He took over the Brimmer bar in April and loves “taking something people are a little afraid of and making it into a delicious cocktail.” With the Porch Reviver he adds a new favorite drink to summer’s cocktail menu.