Tacos Beyond the Truck 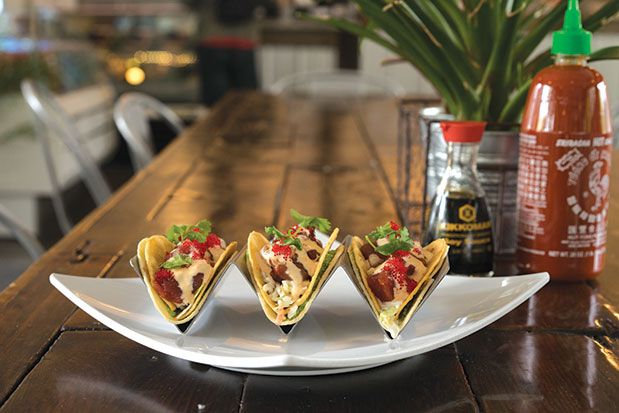 In the world of tacos, dare we say that taste trumps tradition? That’s not to say we don’t adore a true street taco: flavorful meat topped with a few diced onions and cilantro leaves, always the double tortilla, little else (except maybe radish for crunch). But a new wave of restaurants and bars—we hesitate to call them Mexican, or even Mexican-ish—have taken some liberties with what comes in a tortilla. Perhaps we have Marination Mobile to thank; its kalbi beef tacos have been wowing Seattleites since 2009. Authentic or not, we’re totally OK with it.

Kitschy and divey in all the right ways, Nacho Borracho is primarily a bar; the frozen slushie cocktails, made with co-owner Rachel Marshall’s eponymous brand of ginger beer, are particularly divine. But on the other side of the walk-up window at the back of the bar, chef Monica Dimas is turning out quirky taco fillings and house-made tortillas.

Our pick: The General Tso’s chicken taco ($4) is exactly what you think it would be: sticky, sweet- and-spicy, American Chinese-style, batter-dipped chicken—in a taco. It was so popular as a weekend special that it earned a spot on the permanent menu.

What this Fremont bar lacks in ambiance it makes up for in variety: There are some 16 different tacos on the menu, and nearly twice as many tequilas. The excellent, pliable corn tortillas are made in house daily.

Our pick: Born out of a research trip that the owners took to Guadalajara, the taqui-queso ($9, served as two tacos) features a hefty roll of gooey grilled asadero cheese paired with chorizo, or other fillings of your choice. It’s like queso fundido in a tortilla, and that’s a very good thing. One of Ballard’s newest darlings, this restaurant is perhaps the only one on this list aiming for true, authentic Mexican. Chef Chester Gerl’s tacos are the real deal, thanks in no small part to the tortillas, which he makes from masa he has ground from specifically sourced heirloom varieties of corn.

Our pick: The tortillas here could stand alone, but we like them best topped with the tender brisket, or suadero ($4). Chef/owner Manu Alfau just opened this brightly painted walk-up window in July, a Capitol Hill offshoot of his popular Dominican eatery, Manu’s Bodega, in Pioneer Square. In addition to the sandwiches that put his bodega on the map, he’s offering empanadas and ceviche, among other things.

Our pick: Go in the morning for the excellent potato, egg and cheese breakfast taco ($3.50 or 2/$6)—more of a nod to Alfau’s Austin upbringing than to his Latin heritage. Sam Choy’s Poke to the Max

As it continues to operate its popular food truck, this new Hillman City business gives its excellent poke a brick-and-mortar home with a tastefully beachy vibe.

Our pick: Have you ever imagined what an upscale version of Taco Bell’s double decker taco looks like? Chef Choy has created it: fresh Hawaiian tuna poke piled inside a crisp baked flour tortilla, smeared with a layer of edamame hummus and then wrapped in a soft flour tortilla ($12.99). It’s fast-food addictive, without the guilt.