These Seattle Bars and Restaurants Combine Food and Fun

Plan a complete date at these hotspots, which offer more than a good meal. 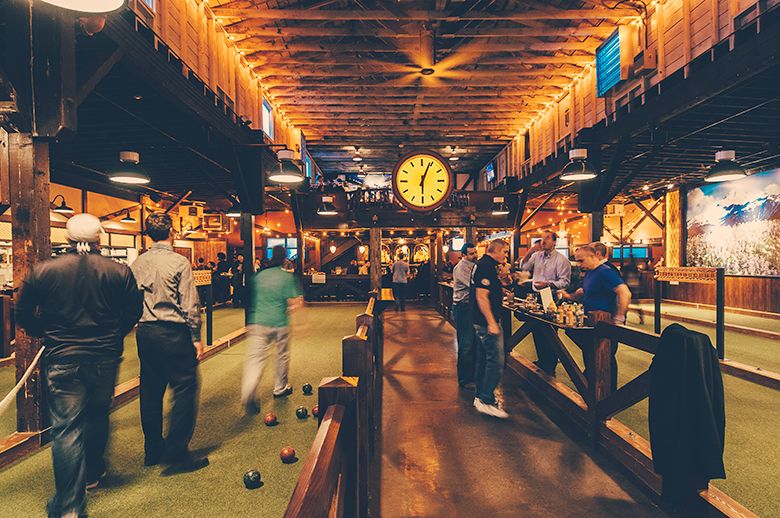 There is no lack of restaurants in this city—no lack of opportunities for entertainment, either. But the popularity of places like The Pink Door and Teatro ZinZanni (miss you) has proven that the sweet spot in the Venn diagram of a night out is where these two intersect: venues that offer both fun and decent dining options. Read on for our recommendations on dinner and a _________ (we’re leaving movie theaters out of this).

The Garage
On Capitol Hill, the adults-only Garage is synonymous with fun times—and not just for the cheap drinks and pool tables. The retro spot (expanded and revamped in 2008 to pay homage to the original 1928 auto shop that once occupied the space) also has 20 lanes of bowling; it’s not unheard of to come for happy hour and stay through last call. Lane reservations recommended.

Flatstick Pub
There are no creepy clowns or whirling windmills, but this grown-up, craft-beer-fueled miniature golf destination in Pioneer Square (yes, miniature golf in Pioneer Square!) gets a touch of whimsy from murals painted by local artist Henry and a miniature neon Space Needle by the ninth hole. There’s a Kirkland location, too, which isn’t quite as colorful but is just as fun; check out the Duffleboard there, a miniature golf/shuffleboard hybrid. Tee-time reservations recommended.

Our pick: Manu Alfau of Manu’s Bodega has an Austin-style taco shop set up inside the Pioneer Square location (in Kirkland, there are savory offerings from 314 Pie). Get the braised beef brisket and chicken tinga tacos ($3 each) with a side of queso and chips ($6).

Rhein Haus
This echoing Bavarian-style beer hall has a menu of sausages and pretzels worth checking out, and German beers sold by the liter. Groups gather over the bocce courts; reservations are available Sunday–Thursday, though they can also be made for Fridays at 4 p.m. and Saturdays from 11 a.m. to 3:30 p.m. If you’re looking for a family-friendly time to visit, try weekend brunch (though the courts are open to all ages prior to 10 p.m. every day).

Our pick: It’s all about the hearty sharable dishes to complement the brews. Try the 2-pound sausage sampler known as Grillwurstl Schmankerl ($28) and the giant, house-baked pretzel ($15).

Café Nordo
There is perhaps no place (since Teatro ZinZanni closed) where food and entertainment are more integrated than at Café Nordo, an immersive dinner theater experience, for which executive chef Erin Brindley is also the artistic director of the theater troupe. Each ticket ($50–$105) includes a three- to five-course prix fixe menu that reflects the theme of the show. Wine or cocktail flights are available for an additional price.

Our pick: Through June 26, the theater is honoring Twin Peaks in “Lost Falls,” a David Lynchian whodunit to coincide with Showtime’s May release of the third season of the television show (see page xx), with diner food (including, we’re hoping, cherry pie).

Mox Boarding House
Ballard’s favorite board game spot just underwent a rebranding: Café Mox and Card Kingdom are now jointly known as Mox Boarding House, just like the Bellevue location. Both are havens for geekdom with tournament rooms for Pokémon and Magic, but approachable for newbies who may want to try something beyond Monopoly over a beer.

Our pick: Like the décor, the Bellevue menu is more elevated than Ballard’s, thanks to a bigger kitchen. But a throwback gaming night deserves a childish meal; choose the liberally buttered Macrina brioche grilled cheese ($9).

Sugar Hill
Late-night eats on Capitol Hill got better when Guitar Srisuthiamorn, co-owner of Ayutthaya, opened this hip-hop lounge/Thai street-food restaurant and bar late last year. Upstairs, there’s a DJ after 10 p.m. and a patio overlooking E Pine Street; downstairs, you’ll want to drink your Gin and Juice [is this a house drink?] in the cozy front nook surrounded by records.

Our pick: The star of the limited menu is khao mun gai ($10), a Thai comfort-food staple of steamed chicken over rice cooked in fat and broth, served alongside a soul-warming winter-melon soup.