Starting Sunday, you can have your fabulous haupia cake and eat it, too. 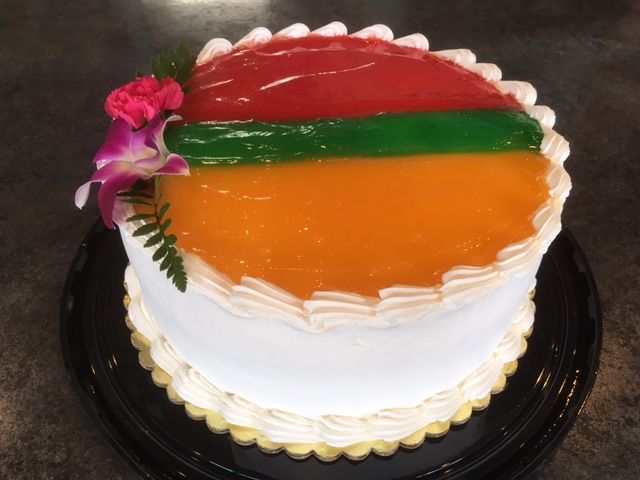 I have no problem admitting when I’m wrong, particularly when it’s about food.

When a co-worker came to me delighted with a slice of guava cake he’d tried from Cakes of Paradise, I was suspicious. Months went by, and he brought it up again. And then I checked out the photos: unnaturally technicolor cakes in Hawaiian flavors (coconut, macadamia nut, tropical fruits). Not generally my thing. But for the sake of office peace, I decided to swing by.

And this, dear readers, is precisely why we shouldn’t be judgmental when it comes to food (or any other art): damn, those cakes are good.

Cakes of Paradise is a family-run Georgetown bakery, affordable in a way Seattleites aren’t accustomed to—for reference, about half the price of a similarly sized Dahlia Bakery cake. They specialize in the type of light chiffon cake best ordered by the sheet, probably for a kid’s birthday party or summer barbecue. Some of the cake itself is flavored with fruit concentrate and colored, others just layered with a sort of fruit jelly and thick slab of (non-dairy) whipped topping. There is a time and place to satisfy that same primal pleasure center of the brain that craves Froot Loops and gummi bears—and it is here.

And while matriarch Mary Buza-Sims has been making cakes for Seattle’s Hawaiian community for 20 odd years (her twin sons and their cousin have run the joint since 2006, but you’ll still find her frosting fat sheet cakes in the back), they’re now expanding: a café next to the bakery will be open officially as of Sunday, May 28. There, fans of the to-go slices will finally have somewhere to sit down and eat them. They’ll be offering these slices accompanied by ice cream—those same Hawaiian flavors like pineapple-coconut, Kona coffee and mango—and fresh fruit or nut toppings. You’ll also be able to find coffee drinks and smoothies and fresh malasadas, a kind of Hawaiian doughnut, made daily. There’s talk of breakfast sandwiches and manapua (a Chinese-influenced Hawaiian filled bun) down the road.

Buza-Sims’ brother Peter Sims owns Kauai Family Restaurant next door, which has been serving Hawaiian plates for only slightly longer than Buza-Sims has been baking cakes. She encourages folks to come for a meal there, but get dessert after at Cakes of Paradise. The family’s kids, their spouses, grandkids, cousins, aunts, uncles are all invested in the businesses’ success—if not directly by working in the kitchen than by helping with the build-out of the new cafe.

Lest you think this is a tiny operation, it’s worth noting that on Mother’s Day, Buza-Sims said they made somewhere in the ballpark of 200 cakes. And that wasn’t including the twice-weekly wholesale orders that go out to Hawaiian restaurants from Lake Stevens to Kent and all Uwajimaya locations.

“We continue to share the aloha spirit, with each other and whoever comes in the door,” Buza-Sims says. “There’s a goodness that comes through our hearts. I want to bring joy to people—through our cakes.” It worked on me.