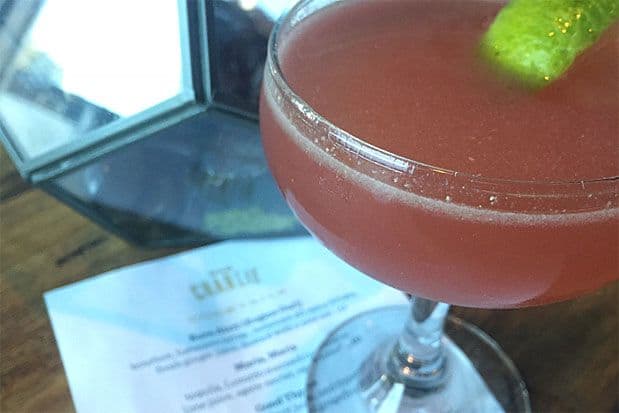 Opened last December on the now-bustling lower Stone Way corridor, Bar Charlie tucks into a space within the ground floor of the Bowman apartment building. The bar, from Christian Thomason (with mentoring from Prost’s Chris Navarra), is already gaining lift as an area favorite. I stopped by recently to see what was taking flight, and here are three impressions of the visit.

The Drinks: Eight craft cocktails made up the drink menu when I visited, many with names reflecting the bar’s aeronautical theme (more about that below), like the Spruce Goose and Cargo of Spices. My top pick was the Connecting Flight, with mezcal, Fee Brothers Old Fashioned bitters, house-made grenadine and fresh lime. It had the slight smoke from the mezcal seated comfortably alongside the tang of real grenadine and lime—full-bodied and refreshing. The Burn Alert (Engine Out!) was another hit. Reading its description of bourbon, habanero syrup, Jamaican allspice bitters, fresh ginger juice and a dash of pale ale, you might think it’d be fiery mix. But it’s a thirst quencher, thanks to that pale ale, with heat and spice undercurrents. They also have wine, and beer on draft ($6 each), including a Bar Charlie pale ale from Rooftop Brewing.

The Food: While Bar Charlie is more watering hole than restaurant, it does have a snug menu of edibles. If in with a group looking to snack, there are some nice small plates like a charcuterie board (which is also available with just cheese if you’re veg). It comes accompanied by warm, thick olives, crisp crostini, tangy Dijon and membrillo (quince paste). There are also three sandwiches: chicken, turkey and a zingy wasabi grilled cheese, and an “Etc.” section with two soups—tomato and clam chowder—a salad and a few other nibbles. Throughout, you’ll see a focus on local products like Lopez Island smoked sockeye salmon, Beecher’s flagship and other cheeses and Mama Lil’s peppers.

The Space: The bar is decorated with a seaplane theme that incorporates engine parts and actual propellers that somehow never veers overboard into kitsch. There’s a swell old propeller behind the bar surrounded by bottles on the wooden bar shelves, a big ceiling fan that looks like a propeller, one wall with a nautical map of the sound, lights hanging low from mooring ropes and some plane photos, but it all feels comfortable, not contrived. For seating, there are nine stools at the Sapele-wood-topped bar, a long communal table topped with the same, a few medium-sized booths against the sidewalk-side wall, one larger booth and floor-to-ceiling windows on two sides letting in lots of light. While the seaplane accouterments are neat, I think my favorite décor was the small rock, lichen and moss gardens on each table, such a nice northwest touch. Overall, Bar Charlie lands smoothly as a picture-perfect neighborhood spot.