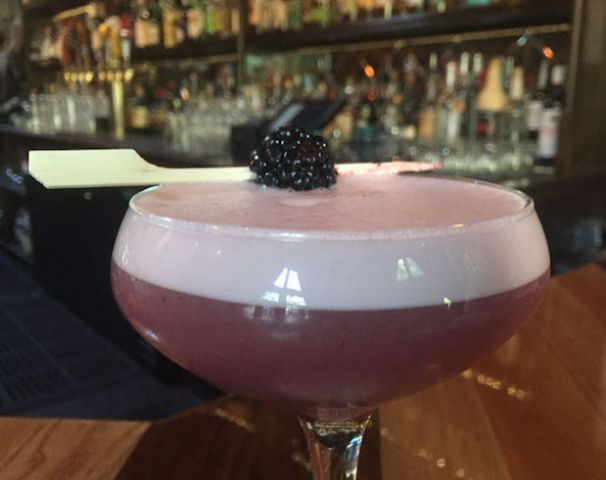 In early June, Corvus & Co. opened on the eastern stretch of Broadway on Capitol Hill and, after a few name changes, has spread its wings throughout the summer months. I stopped by recently to try out the fare and libations, and below are three impressions of the visit.

The Drinks: You’ll discover a host of classic numbers on the menu from co-owners Izzy Guymon and Paul Berryman, who met while working at Percy’s in Ballard. The list goes from the Hemingway Daiquiri (always nice in summer) to the muscular, and a little lesser known, Boulevardier (whose bourbon or rye, Campari, and Dolin sweet vermouth combo may seem a little too serious for the hot months, but really, it’s ideal after a long work day any time of year). But don’t skip to the big page of classics and miss the “Corvus Cocktails” section, which has some really well thought-out drinks, like the Blackbird, with gin, sloe gin, lemon, simple syrup, egg white, and blackberries. It’s a frothy, fresh, smooth mix, with a nice tang and citrus finish–a great cocktail for August. If you’re adventuresome, though, you might just order the We Like Fun, and let swell bartenders like Bridget Maloney (past at Heartwood, Sexton, Witness, and more) create something just for you. The after-dinner drink she made up the night I was in, with Cocchi Torrino, Bonal (an herbal aperitif), ruby port, Meletti amaro, and Fernet, was perfect.

The Food: The well-flavored drinks are matched nicely by chef Mac Jarvis’ Middle Eastern/Mediterranean edible selections, which cover small bites, sweet bites, and larger dishes and plates. It’s not an expansive array, but the flavors and choices are pretty exquisite. On the small bites menu the grilled asparagus topped with a 6-minute egg and a tangy lemon aioli was a standout–the asparagus was slightly charred in spots, bringing a lovely texture and taste. The artichoke fritters are another fine choice, lush and accompanied by a creamy tahini aioli. There are three shawarmas available (shawarma referring to usually the Levantine meat preparation, a long grilling on a spit), including paprika and sumac spiced lamb, and saffron and fennel chicken, but also a chickpea dumpling version sure to make a vegetarian smile, coming out wrapped on pita with a spicy eggplant pepper spread–amazing stuff. They’re also now open for brunch from 10 am to 3 p.m. on Saturdays and Sundays.

The Space: In a great corner spot, the bar is already becoming a hit with Capitol Hill folks. You’ll discover some outdoor seating, if you’d like to be a part of the bustling street scene, and inside a good-sized L-shaped bar with 12 bar stools and an assortment of different booths and bar tables under low-ish lighting and a single ceiling fan. The assorted, mostly animal-inspired art is well curated–the giant owl chiseled out of the first layer of a brick wall, which took about a month, is the showstopper, and also a part of the wall. It’s fun while sipping with a pal or paramour to pick your favorite pieces. The back bar, and the physical bar itself, are both nice wood construction, and where you’ll want to sit, so you can watch the drink-making action close up.