Three Impressions of the Lounge at Circadia 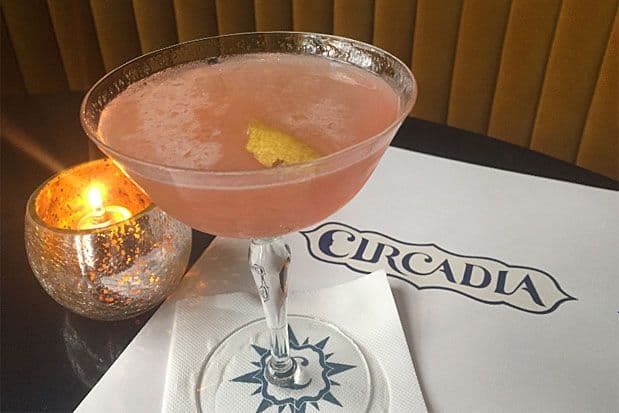 Circadia opened right around Thanksgiving last November, in the spot formerly occupied by Vessel on the corner of Olive and 6th. In late February it launched a Happy Hour menu, the perfect reminder for me to stop by and check out the lounge, cocktails and bar fare. Here are three impressions of the visit.

The Drinks: Happy Hour runs from 4 p.m. to 6 p.m. with a menu featuring an $8 bartender’s choice drink, aka the Today’s Agenda Cocktail. On this visit, the special was an effervescent number with aged rum, Allspice dram (an allspice liqueur), orange bitters and Cock and Bull bitter orange soda. The orange, rum and spice played together wonderfully. The full beverage menu has a number of house cocktails and redefined classics (including an Old Fashioned made with rum, Scotch, Cognac and a maple-apricot gastrique), as well as a solid list of wine and beer. The Circadia Cocktail was another favorite, a classy number with gin, sloe gin, a house lemon-thyme simple syrup and Italian Prosecco, all served up in an elegant cocktail glass. It’s a touch dry, a touch sweet and a shimmering match for the atmosphere.

The Food: While you can order off the full menu in the Lounge (until 10 p.m.), I’m just going to focus on the specific Lounge food menu. The number of available menu items changes (the day I visited there were 9 options available), with the opulent—as far as burgers go—Circadia burger being the showpiece (check out the links below for more about the burger and recent menu adjustments). For a slightly lighter cocktail pairing I suggest the Mushroom Toast: Pain au lait (“milk bread,” which is light and soft but with a memorable gravity) topped with sherry, double cream, a little onion, and rich, forest-y mushrooms, like what forest elves would eat at night under the full moon. A selection of discounted items from the lounge menu are also available for Happy Hour, including the crispy Sunchoke Tostones, which come with a green and garlicky salsa verde.

The Space: Circadia has a sumptuous glitter that stands out in Seattle. The thin-U-shaped bar is adorned with crushed blue velvet bar stools and a lovely quartz blue agate bar top from Brazil (the same is in gray on the open kitchen’s edge). There are mirrored surfaces here and there–giving the shimmer mentioned earlier–groovy patterned wallpaper on one wall, big windows on another, crystal-y chains hanging from the ceiling, lots of blue, turquoise and gold accents and golden chandeliers. Pretty swank stuff. In the lounge area, there’s more crushed velvet and more seating next to the bar, and a second slightly sunken area, with comfortable booths and one long couch, an area that seats around 40. They’ve been doing more parties in that spot, too, as folks look to kick up their heels in a memorable space.

For more on Circadia: