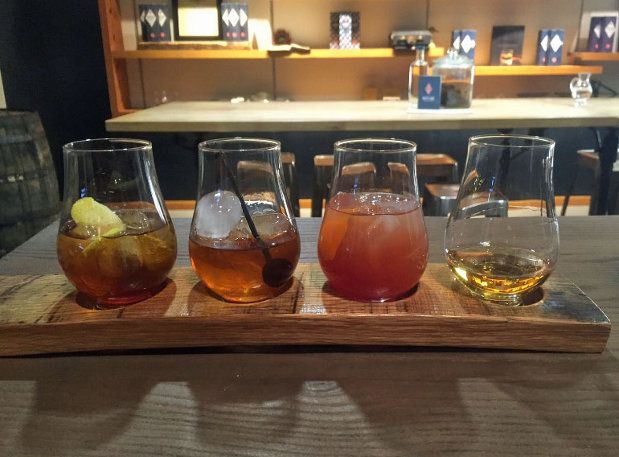 As our still fledgling (but awesome) distillery scene grows and branches out, more distilleries are popping up, established distilleries are expanding and some are even adding food options to the proceedings, though the regulations can be tricky. Not too long ago, Sodo’s Westland Distillery instilled a food and cocktail area within its space, calling it The Cantilever Room. I stopped by recently to sample the sips and the snacks, and here are three impressions.

The Drinks: It’s tempting when in the Cantilever Room to just sample the whiskey; if you’ve never been, it’s not a bad tactic (the distillery is at the forefront of the American Single Malt whiskey revolution and was recently featured in a Washington Post article about it). However, with the launch of the space it’s also possible to sample the whiskey in cocktails. Because of those regulations mentioned above, they are smaller drinks (only featuring a 1/2 ounce of whiskey), and the whiskey can’t be combined with other liquors or liqueurs. But Brian Mura (ex. Crow, Re:public, and others), the driving force behind the room and drink designer, finds these restrictions just drive creativity. You can get individual cocktails, but I suggest the flight, which comes with three small cocktails featuring a different Westland whiskey, and then one pour of a whiskey solo. It’s the amount of alcohol of a normal drink, but you get four different drinks! My favorite in the flight was the Westland Sherry Woodshop, with Westland Sherry Wood whiskey, maple syrup, Angostura bitters, and Fee Brothers Black Walnut bitters. The barley, woodsy, raisin, fruit and pastry flavors from the whiskey are accented perfectly by the layers of bitter and maple. Another hit for me was the Blood and Peat, a refreshing second cousin of the classic Blood and Sand, with Westland’s smoky peated whiskey, Luxardo maraschino syrup, Peychaud’s bitters and San Pellegrino blood orange soda. With a flight you also receive $10 off a bottle purchase.

The Food: Without building out a few extra separating walls, and a full kitchen on the other side of them, Westland has to restrict the types of food available to what they call “picnic” style choices, or pre- packaged snack food. But don’t let that turn you off, it’s still a swell picnic, with lots of local-and-close-to-local hits, like a selection of Beecher’s cheese including their flagship cheese, curds and smoked flagship cheese (the latter is especially good with the smokier Westland whiskies). You’ll also find meats and bread and butter pickles from Portland’s Olympic Provisions, Miss Marjorie’s Steel Drum Plantains (from Marjorie’s here in Seattle), Cupcake Royale ice cream made with Westland whiskey, and more. Don’t miss the Breadfarm Crackers, crispy delights made in Edison, WA, even if you don’t get cheese. The Seed Crackers, topped with organic poppy, sesame and fennel seeds, are the best snack I’ve had in weeks.

The Space: If you haven’t been to Westland, I suggest doing the full distillery tour: the barrel room, shiny big copper stills and inner workings of the distillery aren’t to be missed. The Cantilever Room itself occupies the front room, and while it’s a good-sized space (for an example of how big: at one point, the building was used to make Safeco’s retractable roof) with 30-foot ceilings, it still has a cozy feel, thanks to walls made from lovely wood reclaimed from a mill in Yakima and to the original ceiling beams, all of which provides a northwesterly comfort. There are 50 to 60 seats, ranging from low-slung snuggly leather couches to tall bar tables with metal stools to a long communal table. You’ll see past whiskey releases gently backlit on one wall, a sort-of homage to onetime special releases, and there’s lumberjack-y merch for sale, along with whiskey, of course. It’s an ideal spot for a lighter drink and nibble after work, before a game, on a weekend afternoon or anytime you have whiskey devotees visiting.