Maria Hines on the virtues and versatility of homemade almond milk 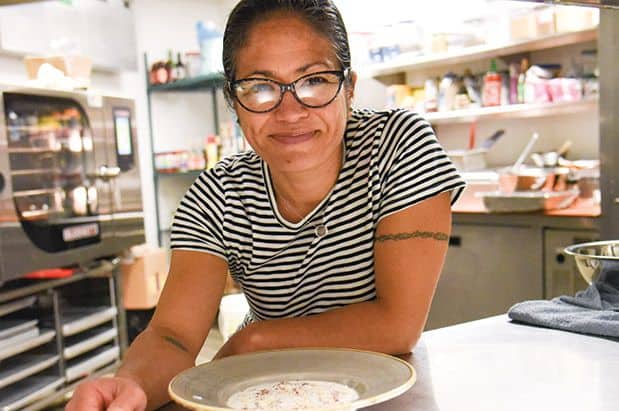 Nut milks—especially almond milk—are having a moment. The creamy liquid is made by grinding nuts with water, resulting in a velvety milk-like beverage. Health-conscious eaters and plant-based diet devotees swear by the nutritional value of nut milks, adding almond milk, for example, to smoothies and swapping out the cream in coffee for Brazil nut milk. But can a nut milk be a star ingredient?

“It is a subtle ingredient that really should be game-changing,” says Maria Hines, chef and owner of Seattle’s zero-waste and certified organic restaurant Tilth, as well as Golden Beetle and Agrodolce (mariahinesrestaurants.com). In 2010, Hines competed alongside some of the country’s best chefs on Bravo’s Top Chef Masters and opted for a modern version of trout amandine, poaching salmon in a pool of thick, silky house-made almond milk to add a subtly nutty flavor.

In their simplest form, nut milks can be made by soaking nuts in water overnight, puréeing them and then straining the purée to get nut milk. Hines takes a true chef’s approach that leaves very little waste behind and results in a thick, creamy nut milk free of grit. She cooks soaked almond slivers on the stove top on low heat for several hours before puréeing in a commercial blender and pushing through a chinois (a fine-mesh strainer).

“At work, it’s my job to go the extra mile. At home, I wouldn’t bother,” she says. When she cooks at home, she opts for an unsweetened, organic store-bought product. At a recent gathering, Hines stirred homemade peanut milk into plain yogurt for a nutty, creamy, tangy pretzel dip. At her restaurants, she adds almond milk to finish a vegan risotto or uses an immersion blender to froth the milk for a finishing sauce. “Being able to experience something in another form or texture changes the flavor,” Hines says. And it’s that experimentation that makes nut milk a star.

Why You Should Try It:
Hines switched to nut milk because she was trying to cut back on consuming dairy. Nut milk is healthy, she says, and includes some protein. Making nut milk is also easy “and a really great thing for guests with dietary restrictions,” says Hines.

How to Use Nut Milk:
For breakfast, use almond milk as the liquid in your oatmeal or pour it over granola. In desserts, nut milks can replace the dairy in rice puddings and sweet custards like gelato and ice cream. Hines finishes a vegan farro risotto with a cupful of almond milk and some nutritional yeast.

Where to Find It:
The Pacific brand of unsweetened nut milk that Hines uses at home for her muesli and smoothies is available at Trader Joe’s (traderjoes.com) and PCC stores (pccnaturalmarkets.com) citywide. For a different nut flavor, at Sweetgrass Food Co. (sweetgrassfoodco.com) in downtown Seattle, try Colleen’s Brew latte, with coconut-mint–Brazil nut milk or turmeric-ginger-cayenne-cashew nut milk.

1. Soak almonds in water overnight.
2. To make soup, strain almonds and put almonds and water in a pot. Cook until almonds are tender.
3. Pour nuts and liquid into a high-speed blender and blend on high until smooth.
4. Add canola oil and emulsify on high for about 30–60 seconds.
5. Season with salt and white pepper and a splash of lemon juice; garnish with sumac and chopped almonds and serve.

1. Soak nuts in water overnight.
2. In the morning, drain and then combine with 2 cups of fresh water. Cook over low heat for several hours until nuts are tender and appear translucent.
3. Pour nuts and liquid into a high-speed blender and purée until nuts are finely chopped, and the mixture is the consistency of mash.
4. Set a fine mesh strainer (or chinois) over a large bowl and pour in the mash, straining it. Press against the nut meat to release all of the milk. Hines counsels to “use chopped nuts or slivers—the smaller the pieces, the more quickly they break down” during cooking.