Behold the power of the swizzle. 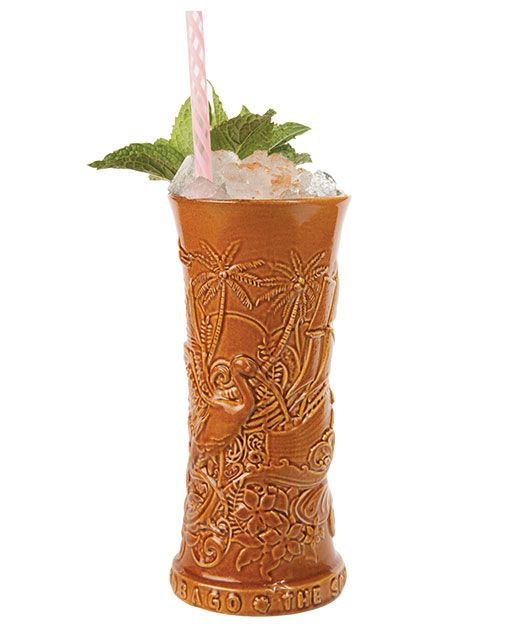 The History: In the mid-1800s, the ice trade was big business, with blocks of natural ice being shipped from the northern U.S. to locations around the world, including the Caribbean. There, thirsty locals pounded it into smaller pieces, added it to a glass with rum, sugar and sometimes citrus, and mixed the ingredients using a branch with five prongs, twirling it between their palms as if starting a fire. The branch was called a “swizzle stick,” and the drink, a swizzle.

The Update: A tiki temple from Chris and Anu Elford (“startenders” who also own No Anchor and the celebrated Rob Roy), Navy Strength offers a drink menu that is a delicious expedition through classic, modern and more exotic island-inspired marvels. The kokum and cashew swizzle fits in like a grass skirt at a luau. The drink starts with a traditional base of 5-year-old Trinidadian Angostura rum and lemon. For the sweet, it infuses ingredients from around the world. First stop: a house cashew orgeat syrup (typically an almond syrup). Next stop: a house-made kokum syrup. Kokum is a fruit from southern India that’s a member of the mangosteen family (sometimes known as a jungle plum), and characterized by a sweet-and-sour flavor. This drink is on the bar menu’s “Travel” section, which rotates its offerings to feature flavors and spices from a different country (through October, the focus is on India).

The Twist: This swizzle’s late-summer appeal, which comes from the combination of rum, citrus and sweet, is boosted by a splash of the unexpected: Small Hand Foods tonic syrup, which brings a tangy earthiness on board. You’ll also taste a dusting of nutmeg and cinnamon, a hint of mint and a few dashes of Angostura bitters.

The Final Taste: The Kokum and Cashew Swizzle is bursting with tropicality: fruit, spice, smoke, sugar and a touch of bitterness to acknowledge that summer always ends. But at Navy Strength, where the vertical-grain fir on the bar resembles the planks of a ship, the delicious tiki drinks come in waves year-round. Fill a tall tiki mug with crushed ice. Add everything except the garnishes. Using your swizzle stick, swizzle well, until everything is combined and frosty. If needed, add a little more ice to fill glass. Garnish with a light dusting of the cinnamon and nutmeg, and the sprig of mint.

NOTE You can find dried kokum at a local Indian grocer (try India Supermarket in Bellevue) or online at Amazon.com; the latter is also a good place to purchase tiki mugs. Or, go totally tiki at Tiki Farm (tikifarm.com). A traditional swizzle stick is needed for proper swizzling; get one at Cocktail Kingdom. If you can’t find Small Hand Foods tonic syrup, try one of our locally made varieties.

Kokum Syrup
A key ingredient in Navy Strength’s kokum and cashew swizzle, this syrup is easy to make, once you’ve tracked down dried kokum at Amazon.com or an Indian grocery store.

1. Add the kokum and water to a medium-size saucepan over medium high heat. Bring to a boil, and hold at a boil for 30 minutes.

2. Add the mix to a blender and mix until combined. Add an equal amount of sugar (by volume) and the salt. Blend again in the blender until the sugar is dissolved. Strain through a fine strainer and let the mixture cool. Pour into glass jars or bottles with good seals and store in the fridge.

A different take on the regular almond-based orgeat that uses cashews, this syrup is another key ingredient for Navy Strength’s tiki-tastic kokum and cashew swizzle.

1. Add the cashews to a small skillet over medium heat. Toast briefly until they become fragrant.

2. Add the cashews to a blender with a little warm water and blend for 30 seconds (add more warm water as needed to help blend and ensure a smooth consistency).

3. Strain the mixture, and then add an equal amount (by volume) of white sugar and the salt. Stir until sugar is dissolved. Pour into glass jars or bottles with good seals and store in the fridge.