The iconic Washington wineries look to the future of our state’s wine industry and wines that give a nod to their roots. 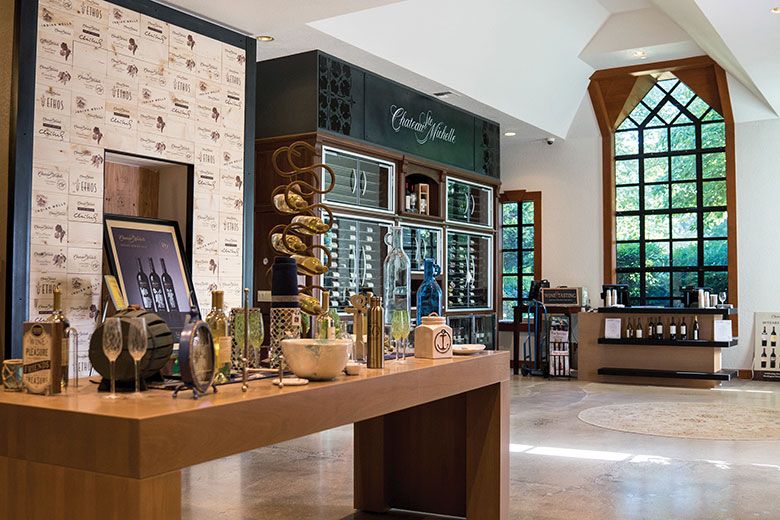 This is a year of milestones in Washington wine, and especially in Woodinville, the beating heart of west-side winemaking. Chateau Ste. Michelle, which essentially inaugurated Washington state as a serious winemaking region, is celebrating its 50th anniversary; DeLille Cellars, which helped kick off the boutique winery phenomenon in Woodinville that has yet to abate, is celebrating its 25th. Each winery is integral to the history of Washington wine; each well deserving of an anniversary toast.

While Ste. Michelle has chosen 1967 as its starting point, the winery’s roots actually stretch all the way back to the repeal of Prohibition, in December 1933. Very soon thereafter, two wine companies were launched: Pomerelle and National Wine Company, with both focused on fruit wines (think blackberries and currants) in the early days. Those companies merged (in 1954) to become a winery called American Wine Growers and shifted their focus to vinifera (wine grapes). In 1967, American Wine Growers launched Ste. Michelle Vintners, but it wasn’t until the actual chateau was built in 1976 that the winery switched to its current moniker.

Over the subsequent half-century, Chateau Ste. Michelle has grown in lockstep with the Washington wine industry as a whole. The number of wineries in Washington is creeping up close to 1,000, and the state boasts more than 50,000 acres under the vine. Meanwhile, Chateau Ste. Michelle has grown to become the second-largest premium American brand sold in the United States, trailing only California’s Kendall Jackson.

But that growth didn’t happen overnight, and neither did the growth of the Woodinville wine scene. In fact, by 1992, 25 years after Ste. Michelle’s launch, there were a grand total of four wineries in Woodinville: Chateau Ste. Michelle, Columbia and two now-closed wineries, French Creek and Facelli. DeLille launched as winery number five in Woodinville, and is now the third-oldest operating winery in town.

DeLille’s founding partners were father and son Charles and Greg Lill, wine broker Jay Soloff (who knew Greg Lil via the Rotary Club) and winemaker Chris Upchurch, a friend of Soloff’s and an acolyte of the legendary Master of Wine (and longtime Columbia winemaker) David Lake, who helped DeLille with vineyard connections in the early years.

“The quantum leap was in the vineyards,” recounted Upchurch. Back in the ’90s, many of the vineyards were oriented north to south, not because that’s necessarily the best orientation for growing grapes, but because, says Upchurch “the roads went that way.” The team at DeLille analyzed everything in the vineyards; not just orientation, but grape clones, the aspects of vineyard slopes, spacing between vines—you name it. DeLille was also among the early pioneers for Bordeaux-style reds (blends of Cabernet Sauvignon, Merlot, Cabernet Franc, Malbec and Petit Verdot), now as common as roundabouts in Woodinville, but back then, they were rarities in a landscape dominated by varietal wines. DeLille’s influence on Washington also stems from many of its assistant winemakers moving onto lead winemaker roles at other wineries. To name a few: Chris Peterson (Avennia), Ross Mickel (Ross Andrew), Lance Baer (Baer), Louis Skinner (Betz), Mike Macmorran (Mark Ryan), and Kit Singh (Lauren Ashton). Even Bob Betz made a couple of vintages for his eponymous winery at DeLille before moving to his own facility. And Betz is a veteran of Ste. Michelle, which has also yielded numerous lead winemakers: Mike Januik of Novelty Hill–Januik, Charlie Hoppes of Fidelitas, Ron Bunnell of Bunnell Family Cellar, Kay Simon of Chinook—the list goes on and on and on.

Neither winery seems content to rest on its well-earned laurels, either. Chateau Ste. Michelle just completed a massive construction project that doubled the size of its old tasting room and added a series of VIP rooms, including one where guests can create their own blends and have them bottled. Its wines are already available in all 50 states and more than 100 countries, but the big upcoming push will be in Asia; especially Japan, Korea and China.

Meanwhile, DeLille has been engaged in a four-year growth spurt, ever since a 2013 investment from private equity firm Bacchus Capital Management. D2, one of DeLille’s signature Bordeaux blends, for example, more than doubled in production from the 2012 vintage (5,500 cases) to the 2014 vintage (11,750 cases) and is poised to continue growing, just like these two Woodinville stalwarts, just like the Washington wine industry as a whole.