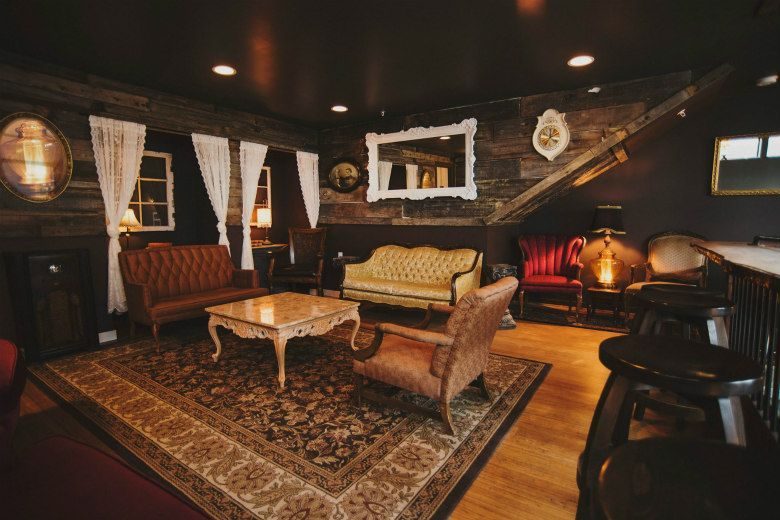 Opening the first week of February in the north Admiral area of West Seattle, the Nook is already gaining a reputation among locals for its drinks. Though with always-closed curtains, it’s still a mystery to some. I recently traveled over to check it out, and here are my first impressions.

The Drinks: The cocktail list has around 17 choices, leaning toward the classics but with lots of original creations and house-made ingredients. I picked The Blushing Saint on the “Recession Hour” (5-7 p.m., Tue.-Thu. and Sun.) menu, which features discounted cocktails and $1 off beer and wine.

It was a lovely, refreshing combination of gin, Aperol, elderflower and lime, with citrus notes and a tiny bit of bitterness underneath. Rotating drink specials are displayed on a chalkboard and I couldn’t resist The Angel Oak, named after the largest tree east of the Mississippi. With a house bourbon-barrel-aged gin, local broVo Amaro #4, French aperitif Lillet and peach bitters, the cocktail had notes of juniper, herbs and woodsy whiskey from the barrel all mingling memorably.

Short lists of wine, beer on draft and in cans, and spirit flights round out the liquid offerings. The 206 flight—with Westland Sherry Wood single malt, Woodinville rye and broVo Jammy vermouth—is a nice way to spend some time with local distilleries.

The Food: There are few food options at the Nook, but you certainly won’t have to drink while starving. You’ll find a tight menu of sandwiches from nearby Freshy’s coffee, which they heat up on a panini grill. The sandwiches include a cheesy mozzarella, provolone, gorgonzola and arugula combo for vegetarians, and a few carnivore choices, like the turkey and pepper jack with peppercorns. A seasonally rotating snack tray was recently unveiled and has become very popular. It’s a good choice for shared nibbling, featuring olives, goat cheese and blueberries on my stop.

The Space: The Nook has a very individual aesthetic—call it a cozy, two-story, eclectic, Northwest neighborhood lounge—starting with the showpiece bar itself. Made by amiable owners Johnny and Jimmy Rolfe from three different slabs of wood (Pacific yew, maple and pine), it’s accompanied by seven or so wooden and metal bar stools.

There’s an array of other seating options spread over the first and second floors—a long wooden-backed booth on one wall, couches and chairs (the wingbacks are especially neat), and a wooden bar rail on the second floor that looks down onto the first.

The accoutrements really set the mood, too: an old rotary telephone and 1920s radio on the bar. Curtained windows leading only to walls. Antique lighting and a single chandelier, plus shelves of twinkling antique glasses. It’s not the best spot for a huge group, but the dim lighting, tasty cocktails and atmosphere make it a fun stop.

And while the locals may shame me for saying so, it’s well worth traveling to from Seattle’s more central neighborhoods.