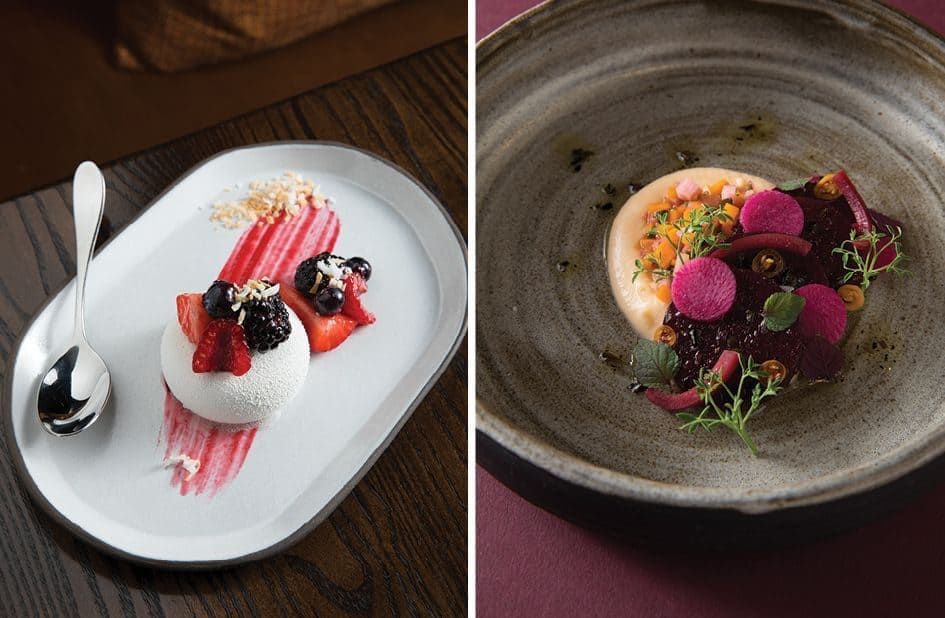 This article appears in print in the April 2020 issue as part of the Get Well Soon cover story. Click here to subscribe. Due to evolving public health concerns related to the coronavirus (COVID-19) outbreak, be sure to check with restaurants for updates on hours, to-go ordering and possible closures.

This past winter, at Art of the Table, a refined locavore restaurant in Wallingford, chef and owner Dustin Ronspies swapped seafood for beets to create the first course of the season’s vegetarian tasting menu, a dish that otherwise mirrors a ceviche he makes with weathervane scallops and spot prawns. Known for fostering close ties with local farmers and purveyors while crafting animal-centered dishes that evolve with the seasons, Ronspies launched a vegetarian menu in the fall of 2018, in part as a response to customer requests and also as a realization of his own culinary interests.

Plants “have thousands of tastes, textures…a color palette of 2,000 shades,” Ronspies says. “The possibilities are endless.” By manipulating plant-based ingredients with seasoned skill, Ronspies delivers exciting textures and flavors that attract the attention of vegans and meat-eaters alike. Imagine a rich, creamy butter made from pulverized pistachios, pecan pie made from eggplant cooked down for hours, and tamales stuffed with mushrooms marinated and shredded to mimic the texture and flavor of barbacoa beef—it’s far from a hard sell, regardless of your preference for meat or dairy.

Ronspies’ vegetarian tasting menu bills at the same rate as his standard tasting menu, a reflection of the additional time and effort required when developing vegetable-forward courses on par with those of the main menu, he says, particularly the challenging execution of plant-based desserts and cheeses. “I put more thought and concern into a vegetarian menu.”

From fine dining to Burger King’s Impossible Whoppers, in ice cream shops and neighborhood cafés, an influx of plant-based cuisine is reshaping local and national menus while challenging the prevalence of animal ingredients that anchor traditional American eating habits. Unlike diet fads that promise fast results and slim physiques, today’s plant-based eating movement hinges on a more holistic relationship with food, one shaped by the potential for big-picture wellness—physical health along with environmental sustainability.

For Gigi Carter, a former financial services professional who is now a licensed nutritionist based on Orcas Island, meat consumption was once tied to status. “[My husband and I] ate out at fancy, hoity-toity, rich-people restaurants, ordered fine wine and filet mignon covered in hollandaise, and all that,” Carter says. “I subconsciously believed that if I gave up those foods, the quality of my life would go down.”

After receiving a diagnosis of high cholesterol at age 35 and turning down a doctor’s recommendation for medication, Carter traded the heavy meat dishes for chicken breast, fish and low-fat dairy. But she says it wasn’t until she embraced a whole-food, plant-based eating regimen that she was able to significantly reduce her cholesterol levels. “The quality of my life increased tenfold. Not only did I feel like a gazillion times better, I became an athlete at 42 years old.” Now, at age 48, Carter is an avid cyclist, and works to help others reap the benefits of plant-based eating as a nutritional consultant.

“If you look at people who predominantly follow that typical western diet of meat and potatoes or a lot of meat consumption and less of the nice whole foods…you’ll notice that their predilection for cholesterol accumulation and atherosclerosis is much higher,” says Dr. Tamanna Singh, a sports cardiologist at Ohio’s Cleveland Clinic, nationally renowned for its heart, vascular and thoracic program. Singh recommends plant-based diets when counseling for the prevention of cholesterol buildup, and notes that plant-based eating benefits not only individual health but has the potential for improving global health, whereas dieting trends primarily center on individual weight loss. “I think the [global] health part of it comes a lot from people who are really vocal about climate change and environmental sustainability and the devastating economic results of farming and livestock and waste.”

As the reasons for embracing plant-based diets increase, Seattle chefs and restaurateurs are rising to the occasion. Goldfinch Tavern, an Ethan Stowell restaurant at the Four Seasons Hotel in downtown Seattle, launched a plant-based menu last winter, with dishes mirroring preparations and plating of those on the restaurant’s main menu. Flavorful beluga lentil spheres retain the appearance of meatballs in a bowl of eggless pasta and arrabbiata sauce, and a king salmon fillet is replaced with cedar-baked tempeh. For dessert, a gluten-free, plant-based chocolate soufflé is made to rise using baking soda, aquafaba and rice flour, while a light and fluffy mousse showcases an artful manipulation of coconut and tofu, achieved by executive chef Emmanuel Calderon and his pastry team.

“When you eat something that’s as alive as it possibly can be without being in the ground, I do feel that your body will actually change and react to that,” says Kari Brunson, owner of veggie-centric Juicebox Café and co-owner of Frankie & Jo’s, a plant-based ice cream company with shops on Capitol Hill and in Ballard, and with a University Village location set to open this spring. “Processed foods feel heavy on my system and generally are higher in sodium content, even if they are plant-based. Every time I eat, I want my body to feel alive and energized, instead of weighed down and overstimulated.”

At Juicebox, you’ll find dairy alternatives such as house-made cashew-date milk and fluffy, cream-colored vegan ricotta cheese, which almost looks out of place when served alongside one of the café’s colorful breakfast or lunch bowls. Frankie & Jo’s serves funky flavors of smooth dairy-free ice cream made with a coconut milk or coconut-cashew milk base—even chewy brownies and cookies are free from animal ingredients and gluten.

“I know [plant-based eating] is more than a trend,” Brunson adds. “For the longevity of our bodies and for the planet, a plant-based diet, in my opinion, is the future.”