Where (and What) to Drink This St. Patrick’s Day

And nary a green pint in sight 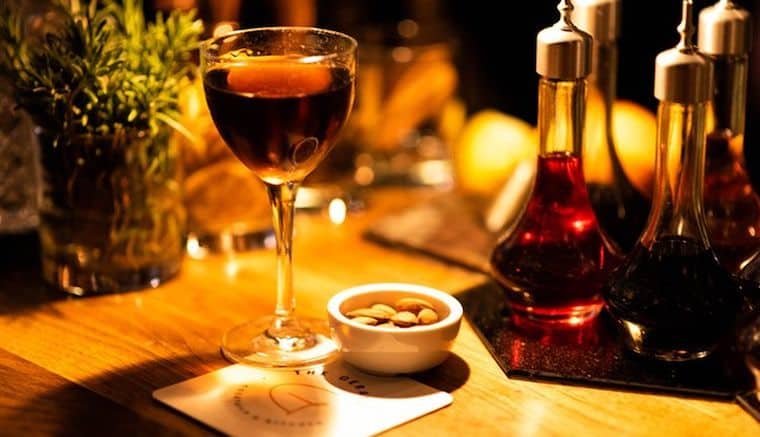 Oh, St. Patrick’s Day. What a great idea you are, a day celebrating Irish culture and history. Sadly, sometimes, the celebration traditions revolve around chemically-greened beer and the same old Guinness. Admittedly, I like a well-poured Guinness now and again, but feel too often people overlook having a well-made cocktail with Irish ingredients, which seems to me a more honorable path. But we are here to help change the tradition! This year, toast your Irish spirit with one of the below drinks: five from local bars, and one you could craft at home.

I’m Here If You Need to Talk
The Gerald
This Dublin dream has a base of Teeling’s Single Grain Irish whiskey, a unique and delish number aged in ex-Californian Cabernet Sauvignon casks. Here, it’s mixed with Peket de Houyeu Genever (genever being gin’s meltier cousin if you didn’t know), Giffard Banane du Brési liqueur, Kent distillery Sidetrack’s sumptuous Nocino green walnut liqueur, and orange bitters, all served alongside toasted almonds you eat while drinking to enhance the overall flavor. Ballard’s Gerald will also be featuring a reduced-price Irish whiskey flight, and are unveiling an original Irish-themed cocktail, as well as offering 20 percent off all bottles on their shelves that have green on theme. That’s quite a St. Patrick’s Day line up!

Tipperary
Fog Room
Want to show your Irish love with a St. Patrick’s Day splurge? Travel up to the rooftop Fog Room downtown for this drink highlighted on their Splurge menu of top-shelf tipples. It starts with full-bodied lush Yellow Spot Irish whiskey, a single pot still whiskey matured in Spanish sherry, Spanish Malaga, and bourbon casks, which is mixed with legendary – and also lush – Italian vermouth Carpano Antica, the longer-aged and heady VEP Green Chartreuse, and a twist. There’s a chance it may have trotted off the menu by Sunday, but jolly Fog Room manager Jesse Cyr assures me they’ll still be able to make it.

Voyager
Bait Shop
This Capitol Hill bar’s vaguely nautical leanings and accents mean it’s a fun place to party in honor of the Emerald Isle (well, that and the fact that it’s just a fun place, period). I have a hard time not suggesting their fantastic frozen Painkiller, but as it is St. Patrick’s, and as I like holidays and holiday drinks, let me point your boat towards the Voyager. Built simply with Tullamore Dew Irish whiskey and bit of cinnamon topped with cider, it’s bound to keep you refreshed no matter how long your holiday journey.

The Boondock Saint
190 Sunset
St. Patrick’s Day may well be the most-observed holiday worldwide, and that includes in Edmonds. If you’re in that fine city looking to take your Irish indulging past the mundane choices, try this thirst quencher that utilizes the fairly-recently-unveiled Sexton Irish whiskey (which comes in a very cool hexagonal bottle and is made from 100% Irish malted barley), Cointreau, lemon Juice, and orange bitters. While it might be too chilly still to take advantage of bar’s outside deck, after a few of these you may not mind the chill.

Irish Triplets
Your House
Here’s a fun little number, which goes back in a way to the Café Royal Cocktail Book published by the United Kingdom Bartenders Guild in 1937, but with a nice reprint version available from Mixellany books. You’ll find a drink called Triplets in the book, using an old brand of blended Scotch, Scotch liqueur Drambuie, and Lillet, in equal parts, beguilingly enough. However, I made it to celebrate St. Patrick’s Day with The Quiet Man Irish whiskey in place of the Scotch and thought it was a swell cocktail, thanks to the four-year-old whiskey’s honey’d vanilla-ness.