Coneheads are swirling with a plethora of creamy soft-serve treats 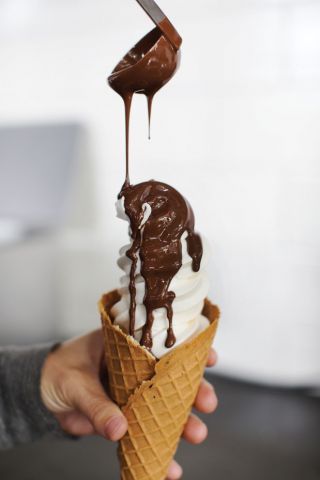 Sweet-toothed Seattleites have no shortage of options when it comes to fulfilling a craving for ice cream. But the newest take on the dairy freeze is not about the Molly Moons, Full Tilts and Bluebirds in the city.

It’s not about gelato. It’s definitely not about fro-yo. No, this is our ode to the unsung hero of frozen dairy-based desserts: simple, swirly soft serve. And while we’re absolutely not above swinging through that lone Seattle Dairy Queen (White Center, 10256 16th Ave. SW; 206.767.4657; dairyqueen.com), let’s rejoice over the more sophisticated sweet shops that are choosing to add soft serve to the menu. Try the nostalgic treat at these spots—not all at once, of course, lest you suffer the mother of all brain freezes.

Rachel’s Ginger Beer
Pike Place Market, 1530 Post Alley, and Capitol Hill, 1610 12th Ave.; rachelsgingerbeer.com
Rachel Marshall made a name for herself by concocting the best ginger beer this city (and in particular, local bartenders) has ever tasted. And though her signature brew can be purchased by the glass or blended into a Montana mule at the flagship Pike Place store, it’s doubly delicious when topped with a hefty swirl of soft-serve ice cream (with or without the whiskey). Vanilla is always on the menu and proves a natural pairing for the bright, bold ginger beer flavors—especially the blood orange, which results in a treat that tastes like a complex Creamsicle. Last summer, Marshall introduced a second flavor, which rotates onto the menu whenever inspiration strikes, generally every six weeks or so. When the weather warms, Marshall is hoping to roll out tropical ginger beer flavors such as papaya, lychee and coconut-mango. A bonus: At the colorful Capitol Hill shop, you can also order a float or a cup with double-fried, Belgian-style fries to drag through the drippings. Hot Cakes
Capitol Hill, 1650 E Olive Way, 206.258.2591, and Ballard, 5427 Ballard Ave. NW, 206.453.3792; getyourhotcakes.com
When Autumn Martin was planning to open Hot Cakes’ second iteration—a light, airy shop on Capitol Hill with outdoor fire pits for DIY s’mores—she decided to invest in a soft-serve machine to help out the staff, which makes many, many milkshakes (making them with traditional ice cream is, well, hard). The cups and organic waffle cones already on the extensive dessert menu were a natural fit for the vanilla-only soft serve. Plus, it gave the innovative chocolatier an excuse to create her own smoked-chocolate magic shell, a hardening chocolate topping reminiscent of childhood summers but with a grown-up, campfire-y twist. If you prefer your ice cream firm (and dairy-free), check out Martin’s new venture with business partner Kari Brunson of Juicebox: a plant-based creamery called Frankie and Jo’s, set to open this fall.

Trove
Capitol Hill, 500 E Pike St.; 206.457.4622; troveseattle.com
Mapping your way through the four quadrants of Rachel Yang and Seif Chirchi’s Trove is a bit like planning a day at Disneyland: Do you start with a drink, have noodles as an appetizer and then linger over barbecue? Or go big with the meat, share a bowl of noodles and enjoy a final nightcap? Whatever your plan, don’t miss the walk-up ice cream truck outside the front door, which slings an ever-changing menu of inventive parfaits featuring swirly frozen custard made by pastry chef Renee Bolstad and layered with sauces, cookies and fun textural elements: nut brittle, toasted seeds, fruit compote and more. Think playful combinations such as hibiscus ice cream with honeycomb and lavender soda, or caramel custard with vanilla cake and spicy popcorn, or occasionally with unique Asian ingredients, such as five-spice and red bean. Each one is served in a small Mason-type jar marked with Trove’s signature X—keep it to improvise your own at home, or return it for $1 off your next parfait. Sugar Plum
Capitol Hill, 324 15th Ave. E; plumbistro.com
Anyone who has tried Makini Howell’s dairy-free Mac ‘n’ Yease knows Plum Restaurants’ owner is a wizard when it comes to vegan food. It should come as no surprise, then, that her most recent opening—a sliver of a sweet shop specializing in vegan ice cream and soft serve, located in the same block as Smith on Capitol Hill—serves desserts just as good as (perhaps even better than) their dairy- and egg-filled counterparts. Working in her commissary kitchen, Howell makes the bases for the soft serve (vanilla, chocolate and rotating flavors such as summer berry, pumpkin, green tea and strawberry rhubarb) from soy, hemp and almond milks. The result is so creamy, you’d never guess it was vegan. Fun fact: Sugar Plum, funded through Community Sourced Capital, was scheduled to open last summer, but Howell delayed her opening for a few months so she could go on tour with Stevie Wonder as his personal chef! Hopefully he likes ice cream.

Little Coney
Ballard, 8003 Seaview Ave. NW; 206.782.6598
Ending an afternoon at Golden Gardens with a $3 chocolate/vanilla swirl from this 1950s throwback—the fast-foodiest of the soft-serve options on our list—is one of summer’s simplest pleasures. Sure, there’s that familiar “this can’t be made with real ingredients” taste, but when the craving hits, does it matter? Skip the drab diner interiors and take your cone or strawberry-sauce-topped sundae outdoors—the ice cream is good, but the views of Shilshole Bay are better.

Trophy Cupcakes
Wallingford, 1815 N 45th St.; 206.632.7020; trophycupcakes.com
Last summer, sugar fanatics were rewarded with a treat: Trophy’s Wallingford location began serving soft serve alongside its menu of cupcakes. The icy offering has been gone for the winter (staff turned off the machines for the cooler months, when customers showed less interest), but assistant manager Drew Thompson gave us hope its soft serve will be back by the time you read this. Expect a decadent twist on vanilla and chocolate—Madagascar bourbon vanilla bean and Valrhona chocolate are whirled into the soft-serve base—served in a variety of ways: swirled into a cone and rolled in sprinkles or (our personal favorite) chocolate and salty pretzels; topped with espresso for an affogato; or covering a cupcake for a most indulgent dessert.