Why You Should Pay $22 for a Can of Fish

Everything old is new again as canning, smoking and pickling seafood make a culinary comeback. 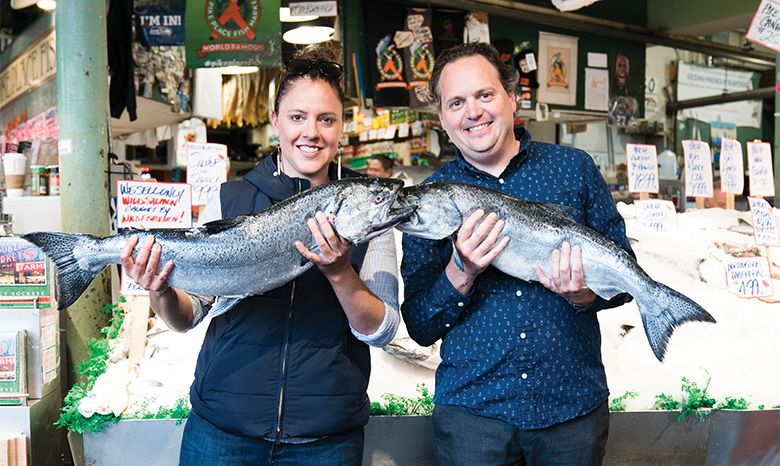 Despite its reputation as a seafood mecca, Seattle bases most of that culinary cred on a small segment of the industry: fresh, in-season fish. It hasn’t always been that way.

In the late 19th century, the West Coast was dotted with seafood canneries, and as Seattle grew, it boasted several smokehouses. Then, with the arrival of flash freezing and speedy modern transportation, the seafood-preserving industry all but faded away. But starting this August, two pairs of local restaurant industry veterans are looking to revive old-school fish preservation methods.

Zoi Antonitsas, a former Top Chef contestant (previously of Westward and Omega Ouzeri), and Bryan Jarr of the tiny but big-thinking Spanish tapas spot JarrBar on Western Avenue, will open Little Fish in August, becoming one of the anchor tenants of Pike Place Market’s Producers Hall in the new MarketFront addition on Western Avenue. The space will integrate a seafood cannery, a retail shop and the pair’s accompanying seafood restaurant.

At about the same time, Young Bros. Smoked Fish Co., from brothers Zac and Jesse Young, will open in Hillman City. Both businesses cite New York City’s Russ & Daughters, a traditional Jewish “appetizing store”—think bagels and lox, cream cheese and such (but no meat, as per Jewish dietary law)—as inspiration, with its fridges full of whitefish salad and jewel-like displays of smoked fish. However, they plan to put a Seattle spin on this classic concept beyond the Nordic lutefisk of Ballard yore. Both shops want to bring a forgotten style of seafood—canned fish at Little Fish and smoked fish at Young Bros.—back to the local culinary scene. How each pair arrived at this point—and the scale of what they’re doing—is completely different.

Jarr first worked with Antonitsas in his role as co-owner of the now-shuttered Madison Park Conservatory, where Antonitsas was the chef. While there, he collaborated with Pike Place Fish Market on its cookbook, which sparked his interest in learning more about seafood; he learned that buying seafood in large quantities brought advantages, such as improvements in price and quality standards. He began to ponder what type of business he could start that would allow him the freedom to buy like that.

Meanwhile, a trip to the Iberian Peninsula led him to a small town in Spain, where he tasted anchovies processed and canned (also referred to as “tinned” in foodie circles) by hand in the nearby village. While Americans tend to perceive canned seafood as inexpensive and of lesser quality, in Spain it’s seen as a way to process a peak-of-the-season product into a high-quality, year-round ingredient. But, Jarr wondered, would people in Seattle be willing to pay for that quality at $22 per can, as they do in Spain? He opened JarrBar, his Pike Place hallway of a bar, partially to test the waters. He’s been successfully serving high-quality imported canned seafood there for almost two years—and now he’s ready to start canning his own.

The canning operation within Little Fish will start with simple products, such as Pacific oysters, savory clams, salmon and albacore tuna, canned in their own juice (called liquor); then, canning production will move onto taramasalata (a Greek spread made from salted and cured fish eggs), which Jarr and Antonitsas will make with sustainable, local pollock roe, instead of overfished cod roe. They want their products to be approachable not only to locals, but to everyone, from “the gay hipster from New York to your grandma from Ohio,” Jarr says. In their attached restaurant, the same tinned seafood will show up in dishes like tuna melts and clam cakes. While chefs Jarr and Antonitsas are planning their menu at Pike Place Market, the Young brothers are putting the finishing touches on their Hillman City fish shop, where the focus will be on local, wild-caught seafood, smoked in house. Young Bros. Smoked Fish Co. will be a Northwest smokehouse with a deli counter that serves house-made products in all sorts of preparations—hot and cold smoked salmon sliced to order, smoked fish chowders and potato fish cakes.

Zac and Jesse Young come from an entirely different side of the restaurant industry: As building contractors, they’ve done buildouts for places like Cupcake Royale and Nue—it’s how Zac met his wife, Heather Earnhardt, when he was building her place, The Wandering Goose. Earnhardt, incidentally, will be making Young Bros.’ baked goods, except for the bagels (brought in to go with the house-made lox), which will be made by Matt Tinder of Bremerton’s Saboteur Bakery.

The Young brothers’ shop will offer some riffs on Northwest family recipes they learned as kids, when they prepared the fish they caught in local rivers, and will also include original creations resulting from the avid fishermen’s experiments—such as their cocktail-inspired old fashioned salmon gravlax with bourbon, orange zest and brown sugar. There also will be Cajun-spiced smoked shrimp and miso-sake-marinated smoked black cod. “We grew up in Alaska, all over the Northwest, always with the smoker going in the backyard,” explains Zac. But lately, he’s noticed a lack of quality smoked salmon in stores, and smoked seafood in general, despite a concerted effort to seek it out. “This is the land of salmon,” he says. “It should be represented by smoked seafood.” He saw an opening to help make that happen with Young Bros.

It’s a sentiment echoed by Jarr and Antonitsas: Seattle is a seafood town, so why is the city’s idea of seafood so limited? It plays into why they’ll be canning and serving tinned fish right in the center of Seattle’s tourist and food scenes at Pike Place Market: a showcase of the city, now featuring its tastiest natural resource in a new form. And, judging from the local reaction, it won’t just be for tourists. The Young brothers say most of the feedback they’ve heard on the idea has been “Hurry up and open!”