Winter is Here, Which Means Shellfish Season is Upon Us

It's the perfect time to hunt for crabs, clams and oysters. 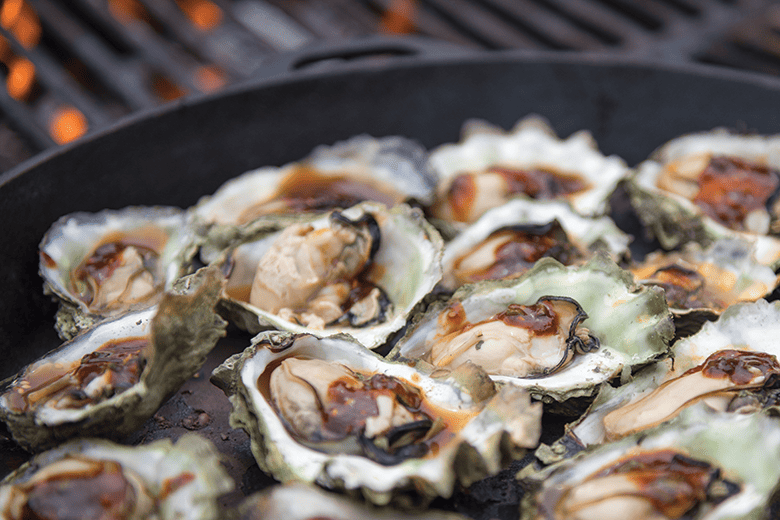 Another year of wild foods is upon us, with its promise of culinary adventures both outdoors and in the kitchen.

When we think of the foraging calendar here in the Pacific Northwest, it’s practical to divvy up the year into seasons: Springtime means fresh greens; summer is for picking berries; and fall is a basket full of fungi. But what about now, during the cold, dark days of winter?

In fact, this happens to be the best season to harvest shellfish. Puget Sound and the coastal bays and estuaries are home to world-class crustaceans and mollusks, from Dungeness crabs to myriad clams and oysters. They all typically spawn during the warmer months, putting much of their energy (and flavor) into reproduction. The winter is their chance to fatten up again.

Oysters, in particular, are at their peak during the coldest months of the year. Now is when I like to visit our local tidelands for some unsurpassed waterside shucking and slurping. Eating a raw oyster right off the beach is a treat that all Washington state residents should try. On the West Coast, only Washington can boast of public oyster flats. Take a look at the state’s Department of Fish and Wildlife website to find an open shellfish beach near you.

The limit is 18 oysters per person per day, and you must have a permit ($17.40 for an annual resident shellfish/seaweed license, or $55.35 for a combo fishing/shellfish license, which can be purchased online. Make sure you shuck the oysters where you find them and leave the shells on the beach; baby oysters “set” and grow on the backs of their elders, so it’s unlawful to remove shells. (Novices can check out our oyster shucking guide for tips.) I usually bring along a jar for the collecting of oysters—and a bottle of light, minerally white wine, such as Muscadet, to accompany the bivalves that I eat in situ. A crisp, not-too-malty beer is good as well.

When slurping down one of our plump and delicious oysters, toast Seattle’s great seafood evangelist Jon Rowley, who passed away this past fall. For decades, Jon worked tirelessly to put our local oysters (and growers, such as Taylor Shellfish Farms) on the map. Washington state is now considered among the preeminent producers of oysters worldwide, and we all owe Jon a debt of gratitude for this distinction. Salut, @oysterwine!

Winter is a great time to fire up a barbecue with hand-warming coals to grill a mess of oysters. Years ago, the late seafood evangelist Jon Rowley introduced me to John Adams, the third-generation owner of Sound Fresh Clams & Oysters, based near Shelton, on the South Sound. John and I now teach shellfish foraging and cooking classes together, and this recipe (invented by his daughter Ellie) is a mainstay of our classes, especially on those wet and blustery days typical of winter and early spring. Note: If you’re picking oysters on a public beach, you’ll need to bring your own shells; I keep a Tupperware filled with oyster shells just for this purpose.

In a bowl, mix together hoisin sauce, soy sauce, red pepper flakes, sesame oil and sliced green onions. Place shucked oysters (still in the shell) on grill, preferably over a bed of hot coals. Spoon sauce over oysters and sprinkle with sesame seeds. When the sauce has bubbled for a couple minutes and oyster meats are firm, remove from heat, allow to briefly cool and slurp hot out of the shell. Optional: Add a seasonal chopped vegetable, such as asparagus in spring.

PLUS: Langdon Cook was on KING5’s New Day NW this week cooking up this recipe. Watch the segment below.