The master crowd wrangler explains why his flash mobs have staying power. 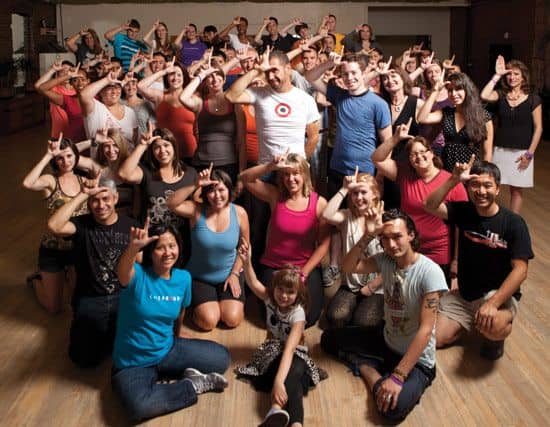 At age 10, he was reciting Shakespeare on the stage of a community theater, and ever since, Egan Orion (shown in bullseye tee) has been commanding attention.

With a background in theater and extensive experience producing mondo-scale parties (hello, Seattle PrideFest!), the 40-year-old Central District resident has become the name in the Seattle flash mob scene.

Last July, he coordinated a “Fireworks” mob when Katy Perry was in town for a concert, and a “Jai Ho” mob for an Indian wedding. Amid planning for several fall flash mobs (be on the lookout), the Auburn native explains why he loves taking Seattle residents by surprise.

SM: You’re known in Seattle for your involvement in the LGBT community—especially Seattle PrideFest. What got you interested in flash mobs?

EO: All of the events I produce have a music and art component to them, and seek to connect people. I thought flash mobs were simply something fun to do, but we’ve created a whole community of people who want nothing more than to dance in the streets. I realized this thing we’re doing is changing people’s lives for the better.

SM: Flash mobs look so spontaneous. What goes into the planning?

EO: For some flash mobs, we plan and practice over many months. Dance mobs are really intensive because you have to do a music mix, create choreography and then teach it. For conceptual mobs—like a “freeze” mob, which we recently did in Pike Place Market—we can give a few instructions and have people show up at a particular time and place.

SM: How do you get hundreds of people to dance for you for free?

SM: Are flash mobs just another flash in the pan?

EO: I thought a year ago that they were on the wane, but they have surged back recently. I think public dancing is something innate, and prehistoric, and people love a surprise.