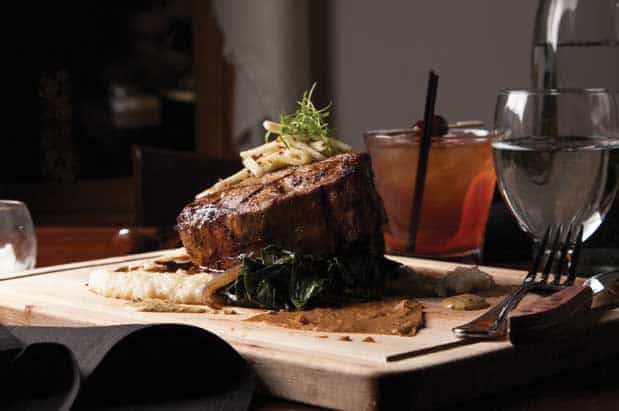 This article originally appeared in the February 2014 issue of Seattle Magazine.

!–paging_filter–pBefore Derek Ronspies opened Le Petit Cochon, his masculine homage to nose-to-tail cooking, he impressed me with his cooking at his brother Dustin’s place about a mile up the road, The Art of the Table. Cochon, a bit hidden in its home upstairs from Fremont’s Chiso, is a lot less formal, a whole lot more rock ’n’ roll. A first hint at Cochon’s ethos? The “snacks” portion of the menu—which changes daily—lists “D’s Nuts.” (Turns out to be a completely average bag of spiced nuts, $5, which figures, right?) Still, if you can get past the nut jokes, the food at Cochon is, on the whole, pretty great. When the house-made lamb prosciutto arrived, it stopped me in my tracks. Cured for 10 months until silken and thoroughly gamey, it felt like Ronspies had shared a precious gift. The beef and broccoli starter, a play on the classic Chinese dish, employing bone marrow and young broccoli branches, was good, too. I just wish there had been a starch (rice cakes? toast?) to catch the marrow drippings. Among the entrées, the black cod impresses. It’s moist and supple, with bitter orange playing off an octopus-head ragu (they’re not kidding about the nose-to-tail mission). But the big Olsen Farms “phat ass” pork chop—presented on a cutting board—stole the show. Four inches thick, pink and juicy, it arrives atop buttery grits and a nutty, mildly spicy red mole sauce. Even dessert is thrilling: The dense, intense chocolate lardo pâté (served on top of almond butter and topped with cinnamon-and-sugar chicharrónes and house-made ice cream) is one of the best desserts I tasted all year. And it didn’t make me blush to order it. Small plates $11–$18, large plates $20–$32. Dinner Tue.–Sat. Fremont, 701 N 36th St., Suite 200 (upstairs); 206.829.8943; a href=”http://www.gettinpiggy.com” target=”_blank”gettinpiggy.com /a/p