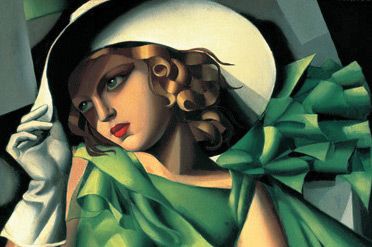 Three cheers for fall, when Seattleites switch gears—from soaking up every inch of summer possible to gorging on our city’s amazing wealth of arts offerings. This year promises to be no different, with so many excellent chances to experience dance, film, music, theater and visual arts that, frankly, we’re already worried about having to make some hard choices. The smorgasbord includes everything from Seattle Art Museum’s crash course in women’s studies to two world premieres by hometown choreographer Mark Morris, to a concert by young music innovator Jherek Bischoff and a Seattle indie favorite: moody puppets. Also not to be missed: the big reveal of our 2012 Spotlight Awards, given to local artists doing incredible work in their field. Hip, hip, hooray!

Click through the following links to other Fall Arts stories, or for more information on specific events.

DANCE
Don’t miss a chance to see brand-new works from these choreographers.

Gob Squad’s Kitchen (You’ve Never Had It So Good)

MUSIC
So You Wanna Hear Live Music in Seattle? Then reference Brangien Davis’ helpful flow chart to help you find just the right music for your frame of mind. Download the full chart here. 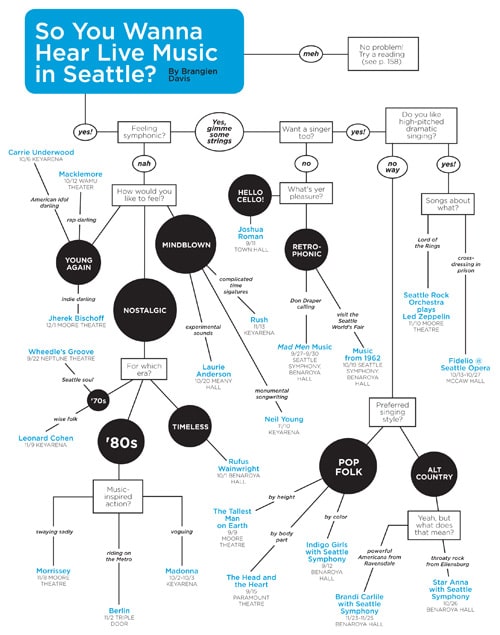 Treat yourself to a joint appearance by local writers Maria Semple and Jonathan Evison, both reading from rollicking new novels. In Where’d You Go, Bernadette, Semple hoists Seattle on its own artisanal petard, poking fun at our city’s eccentricities with a high-energy, often laugh-out-loud novel in which Bernadette’s daughter, Bee, attempts to figure out what led to her mother’s breakdown and disappearance. In Evison’s The Revised Fundamentals of Caregiving, a former stay-at-home dad who has lost everything he loves embarks on a funny, touching, redemptive road trip with a ragtag crew of troubled souls. 9/19. 7 p.m. Free. University Bookstore, 4326 University Way NE; 206.634.0810; bookstore.washington.edu

In addition to our homegrown talent, Seattle is experiencing a serious invasion of literary superstars this month

September starts with formidable British writer Martin Amis (9/17 at University Bookstore), whose darkly comic postmodern stories led The New York Times to call him the master of “the new unpleasantness.” His brand-new novel, Lionel Asbo: State of England, is said to be his most broadly humorous yet.

Based in Seattle but living/breathing Montana, Ivan Doig reads from his latest novel, The Bartender’s Tale (9/20 at University Bookstore) about a boy raised in the back of a barroom.

Perhaps best known for The Road to Wellville, the inimitable and prolific T.C. Boyle hits Seattle Arts & Lectures (9/24 at Meany Hall) to talk about his new novel, San Miguel.

The genius responsible for The Amazing Adventures of Kavalier & Clay, Michael Chabon is back with a brand-new novel, Telegraph Avenue, about old friendships encountering new strains, which he’ll read from as part of The Stranger’s Verse Chapter Verse series (9/28 at Fred Wildlife Refuge).

And while you’re making literary plans, better get tix now for December’s must-see appearance: Indie goddess Miranda July appears at Seattle Arts & Lectures (12/5, at Benaroya) to talk about her various artistic explorations of the human condition.