Hunting for porcini mushrooms on the eastern slope 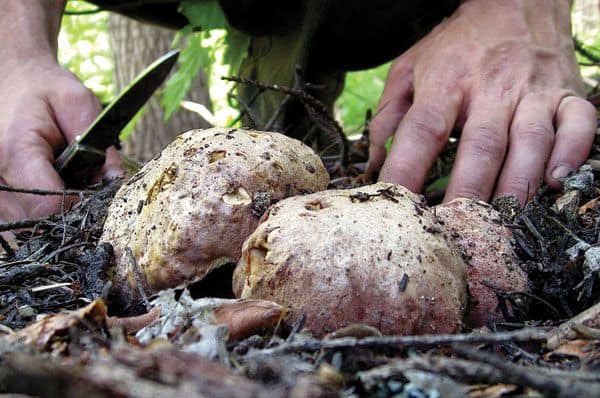 The Italians call them porcini—little pigs—now the accepted term of commerce for a group of meaty, sought-after mushrooms in the bolete family. It’s an exotic word that spruces up any restaurant menu, evoking thoughts of deep forests and rich, earthy flavors.

Here in Washington, we’re fortunate to have both a spring season and a fall season for porcini. At this time of year, Seattle mushroom hunters drive over a mountain pass to sate their porcini desires. The mushrooms fruit on the eastern slope of the Cascades when the queen’s cup lily blooms and the trillium turns pink, in fragrant forests of fir and pine where they live in symbiosis with conifer roots. They prefer wild, remote haunts; more than once I’ve disturbed an elusive (and suddenly cacophonous) goshawk from its nest while pursuing these mushrooms off-trail. I start looking in late May, though you can find spring porcini as early as April in the warmest microclimates near the Columbia River Gorge.

Unlike fall porcini, the spring variety does most of its growing underground. Mushroom hunters look for telltale “mushrumps”—rounded bumps in the duff that betray a mushroom forming out of sight below the surface. Learning to spot a mushrump is a key skill for the successful forager, because once the fungus has burst into view it is often soft and insect-riddled. Knowledgeable hunters find them while still immature, with barely open caps and firm flesh. Like all of their cousins in the bolete family, “spring kings” have pores underneath the cap, rather than gills. The freshest specimens will have white or grayish pores; older mushrooms are distinguished by their yellow pores. Cut in half, the flesh is pure white and dense; the cap surface, a pinkish tan.

One of my favorite ways to use spring porcini is a traditional Italian preparation: sliced a quarter-inch thick, marinated in olive oil, salt and garlic, and grilled like steak until golden and crispy on the outside. I also dehydrate some of my catch. Dried porcini has a rich, toasty flavor that deepens with age. Pulverized and reconstituted with warm water, dried porcini lends an earthy bass note to sauces, stews and soups.

Don’t expect to find spring porcini your first time out. Dedicated mushroom hunters spend years tramping through likely habitat, assembling a portfolio of dependable patches over time, some of those patches no bigger than the radius of a single fir tree’s root structure. Like mushroom hunting in general, the pursuit of spring porcini is a pleasure unto itself. And those occasional triumphs, when the basket overflows with little pigs? Buon appetito!

Favorite Use (see below): Grilled porcini on ricotta cheese and garlic-rubbed baguette. Cook says, “The garnish is an herb from our garden that’s gone to flower, either thyme or oregano.”