The 7 Wonders of Washington State

From Mount Rainier to the Hoh Rain Forest, the places every local should visit This article appears in print in the August 2019 issue, as part of the Washington’s Top 12 Beautiful Escapes cover story. Click here to subscribe.

Look around. Whether you head east, west, north or south, the wild beauty of our state quickly reveals itself in these seven iconic spots (and a few honorable mentions). In truth, a state with 17.8 million acres of public lands spread over three national parks, five national forests, and hundreds of state and regional parks is home to far more than seven beautiful places. But we’ve winnowed the list to give you a solid starting point for exploring. The good news: Once you’ve visited all of these spots, there’s still plenty more to explore, so gas or charge up the car and hit the road. The wonders await.

Getting There :About a two-hour drive south of Seattle in central western Washington; the park has multiple entrances, including the Nisqually, Carbon River and east entrances; nps.gov/mora

Why You Should See It: This mountain is the icon of Washington state (it’s on your license plate, after all). Seeing Mount Rainier pop out from the clouds occasionally on your Interstate 5 commute isn’t enough. If you aren’t going to climb it, at least go visit its namesake national park and drink in the sublime beauty of nature, replete with waterfalls, glaciers (it’s the most glaciated peak in the contiguous U.S.) and otherworldly views of the alpha peak of Washington’s Cascade Range.

Don’t Miss: For six to eight weeks in July and August, the park’s Paradise and Sunrise locations are guaranteed to be awash in wildflowers: lupine, Indian paintbrush, avalanche lily, cinquefoil, monkey flower and fireweed are among the colorful denizens of the Cascades’ typically rococo display. Crowd-averse hikers will enjoy the vigorous 8-mile round-trip day trek up to wildflower-festooned Spray Park and back in the national park’s least visited, northwest quadrant.

Nearby: Besides the requisite burgers and sandwiches, Wildberry Restaurant (Ashford, 37718 State Route 706 E; 360.569.2277; open May–October) serves traditional foods of Nepal and Tibet (think Himalayan dumplings and thali) thanks to Nepalese owner Lhakpa Gelu Sherpa, who just happens to hold the world record for the fastest ascent of Mount Everest on one of his 15 climbs there. 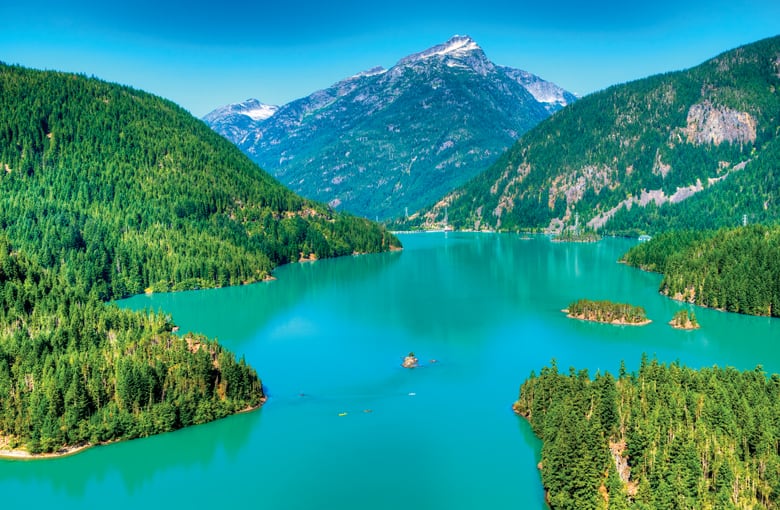 LIVING COLOR :The brilliant turquoise of Diablo Lake is thanks to light reflecting off the “glacial rock flour” suspended in the water

Getting There: About two and a half hours northeast of Seattle, just off State Route 20, also known as the North Cascades Highway; nps.gov/noca

Why You Should See It: An impossible combination of serenity and grandeur, the North Cascades National Park is undoubtedly one of the most beautiful places in the United States. Diablo Lake is a liquid gem in the center of it, shimmering like a turquoise diamond rimmed with evergreen in the forest primeval.

Don’t Miss: The Diablo Lake Vista Point on State Route 20 affords a sweeping bird’s-eye panorama of the rugged elemental beauty of the North Cascades in all of its glory. Looking over this wild domain, you’re guaranteed to forget all about the latest White House scandal and that work memo that’s been bugging you.

Nearby: Go on a hands-on learning adventure or field excursion with the North Cascades Institute, a nonprofit headquartered on the shores of Diablo Lake. Check out Ross Lake Resort, whose floating cabins were installed in the 1930s to house workers building Diablo and Ross dams; nowadays, it serves as a resort and jumping-off point for paddling and hiking adventures. Take a narrated tour of Diablo Lake aboard Seattle City Light’s Alice Ross IV, during which you’ll learn about the area’s natural and cultural history, and see snowcapped North Cascade peaks, evergreen-clad islands and unnamed waterfalls plunging off cliffs into the lake below. ALPINE MEADOWS: Drive up to Hurricane Ridge and join the deer for up-close views of peaks and valleys, no backpack needed

Getting There: About a three-hour drive northwest of Seattle on the Olympic Peninsula, and 17 miles south of Port Angeles via the Hurricane Ridge Road; nps.gov/olym

Why You Should See It: Enjoy one of the few opportunities to get above the tree line and into an alpine wonderland without backpacking in; you can drive right up and have a look around. And by “around,” we mean 360 degrees of rock and ice and trees, punctuated by a wealth of wildflowers and deer cuter than Bambi. Unless you’re a climber, you’ll never see the tops of mountains this up close and personal anywhere in the U.S.

Don’t Miss: Look carefully and you can spot Port Angeles and its timber-shipping facilities along a particularly busy stretch of coastline about 10 miles (as the eagle flies) to the north. Meanwhile, container ships and ferries plying the Strait of Juan de Fuca look like tiny toys in some make-believe Lilliputian world.

Nearby: If you like white-knuckle drives, head southeast from Hurricane Ridge on the 8-mile dirt “road”—not for the faint of heart—to Obstruction Point. Then, start hiking part or all of the relatively easy trail past glaciers, tarns and even Mount Olympus itself to Deer Park, some 15 glorious Olympic alpine backcountry miles away. Day hikers just turn around whenever they feel so inclined, while overnighters with supplies and a backcountry permit can pick their perch for the night anywhere along the way. 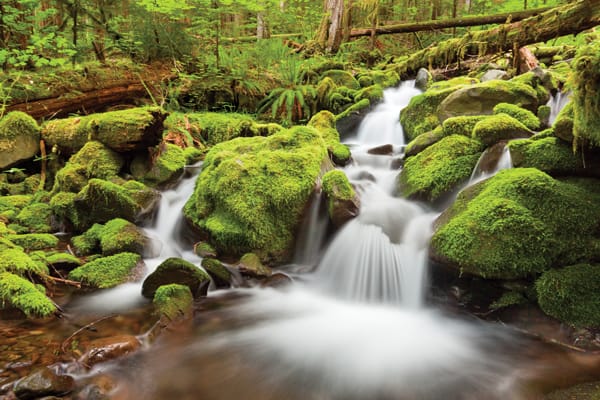 UNDER COVER: A couple stands still, dwarfed by the trees in the rain forest. And that red blur? Another visitor moving fast through the trees. At right, a confluence of cascading waterfalls surrounded by mossy rocks

Getting There: About four and a half hours west of Seattle on the Olympic Peninsula, and 31 miles south of Forks off U.S. Highway 101; nps.gov/olym

Why You Should See It: Who needs the Amazonian jungle (or the interior of Amazon’s South Lake Union Spheres, for that matter) when we’ve got our own teeming wild rain forest nearby, where 140‒170 inches of rain fall each year? Fuzzy epiphyte-covered big-leaf maple boughs sweep in front of stately Sitka spruce, Douglas fir and western red cedar specimens as old as just about any trees on the planet. This constantly dripping drama plays out at every turn along the network of well-maintained but often muddy trails starting out from behind the Hoh Rain Forest Visitor Center.

Don’t Miss: Become one with the temperate rain forest along the easy but often muddy Hall of Mosses Trail, a 0.8-mile loop through the Northwest’s own deep, dark jungle, although here you’re more likely to see majestic Roosevelt elk or slimy banana slugs than any howler monkeys or scarlet macaws.

Nearby: Find the tiny red pebble marking One Square Inch of Silence, supposedly the quietest spot in the Lower 48 as designated by acoustic ecologist Gordon Hempton. An easy 3.2-mile ramble from the Hoh Rain Forest Visitor Center gets you deep into the temperate rain forest wilderness, far out of earshot of any machines, motors or even airplanes, to the spot that launched a movement to keep wild places not just free from resource extraction and development but also from man-made noise. 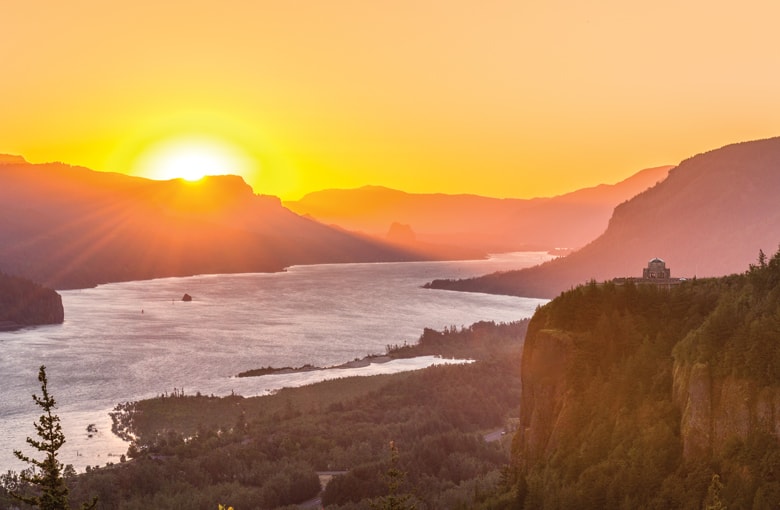 DIVING LINE: The sun rises over the Washington side of the Columbia River Gorge. On the Oregon side, the Vista House overlooks the river

Getting There: About a three-hour drive south of Seattle, and east-west along the Washington-Oregon border; fs.usda.gov/crgnsa

Why You Should See It: Whether you are windsurfing near Stevenson or sipping a latte or microbrew along the shoreline, chances are you will be smitten with this 80-mile section of the Columbia River (roughly from Washougal to Wishram), where one canyon reaches a depth of 4,000 feet. The mother of all western rivers, the Columbia has been pounding out its course for 50 million years—predating the tectonic uplift responsible for creating the Cascades—and as such, commands respect as perhaps the defining geologic element of our corner of the Lower 48.

Don’t Miss: Beacon Rock State Park (Skamania, 34841 State Route 14; 509.427.8265), on the Washington side of the river, is a great place to check out the Columbia through the wildflower-fringed meadows of nearby Hamilton Mountain.

Nearby: Duck over to the Oregon side on the famous Bridge of the Gods at Bonneville and check out iconic 611-foot Multnomah Falls (just off Interstate 84 at exit 31; fs.usda.gov) and several other world-class waterfalls tumbling out of the temperate rain forest surrounding the gorge. 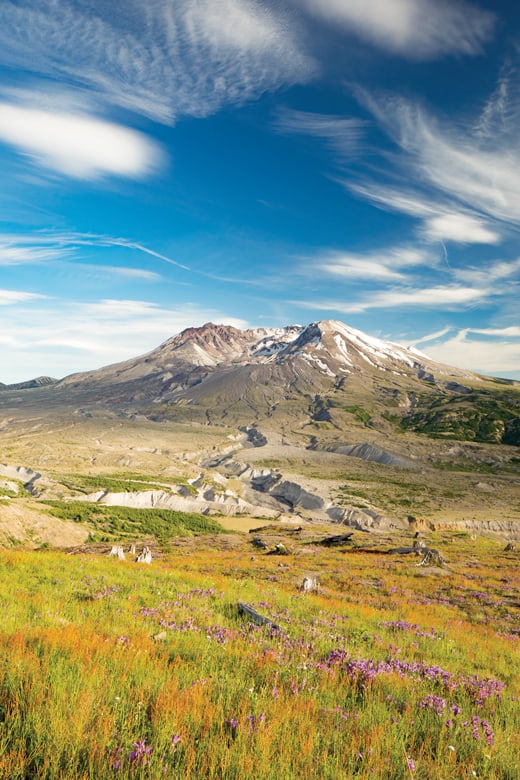