Casinos, those marvelous cruise ships of the land, offer a cornucopia of entertainment options all in one place. Whether you’re a gambler, a buffet connoisseur, a spa enthusiast or a Michael Bolton fan, there’s a casino within driving distance of Seattle to scratch that itch. Below, find our uncomprehensive list of regional options, broken down by vital stats and special extras.

Tulalip Resort Casino
Tulalip
Driving distance from downtown Seattle: 37 miles
Lodging: Yes
Food and drink options: Eight, including the Eagles Buffet and seafood-centric spot Blackfish
Entertainment: On the 2020 schedule so far: MMA Supreme Showdown 5; a Lunar New Year celebration on January 25, welcoming the Year of the Rat; and Michael Bolton.
Extras: The Oasis pool may be indoors, but with its glass atrium, waterfall and attached outdoor patio, you’d be forgiven for thinking otherwise. For a more private form of relaxation, check out the T Spa, with its enticing menu of services, including massage, body treatments and Native American-inspired spa rituals.

Angel of the Winds Casino Resort
Arlington
Driving distance from downtown Seattle: 47 miles
Lodging: Yes
Food and drink options: Nine, including Whiskey Prime Steakhouse and Riverside Buffet
Entertainment: The 2020 concert lineup had yet to be announced as of press time, but 2019 highlights at this rock-leaning venue included Foghat and Bret Michaels.
Extras: A recent expansion, completed and unveiled in October 2019, added a 16-lane bowling alley that features HyperBowling, a high-tech function that allows you to raise and lower bumpers with lighted targets, creating all different kinds of family-friendly games. Also part of the expansion, a sports simulator lineup that includes golf, hockey, cricket and, of course, zombie dodgeball.

Swinomish Casino & Lodge
Anacortes
Driving distance from downtown Seattle: 74 miles
Lodging: Lodge and RV park
Food and drink options: Six, including fine-dining restaurant 13moons and Fatburger
Entertainment: In addition to checking out regional bands and high-energy cover-band dance parties, you can count on singing karaoke every Sunday.
Extras: Golfers and nature enthusiasts alike should enjoy playing a round at Swinomish Golf Links, an 18-hole course situated right in between Similk and Fidalgo bays and offering spectacular views of both, not to mention a view of Mount Baker when weather allows. If you agree with that famous (and famously apocryphal) Mark Twain quote about golf being a good walk spoiled, Deception Pass State Park is just a 15-minute drive from the casino.

Ilani Casino Resort
Ridgefield
Driving distance from downtown Seattle: 150 miles
Lodging: No, although plans to build a hotel are underway
Food and drink options: Ten, including Line & Lure Seafood Kitchen and Tap
Entertainment: The Cowlitz Ballroom has an impressive list of past guests, including Pitbull, Jay Leno, Amy Schumer and Alanis Morissette. Performers already announced for 2020 include comedian Sebastian Maniscalco and the 15th-anniversary tour of Celtic Woman, among many others.
Extras: Unload some of your winnings by picking up an outfit or two at on-site boutique Marshall Rousso and completing them with accessories from Ruby Blue.

Snoqualmie Casino
Snoqualmie
Driving distance from downtown Seattle: 27 miles
Lodging: No
Food and drink options: Six, including pan-Asian restaurant 12 Moons and Falls Buffet
Entertainment: Snoqualmie’s talent lineup, on two stages, includes everything from comedians and country musicians to beloved performers from Vietnam and Hong Kong.
Extras: While there’s no on-site hotel, for $10, the SnoExpress bus will pick you up and drop you off at one of 13 locations in the Seattle area—and with the ride, you’ll get a $10 food voucher and a $10 game-play credit. 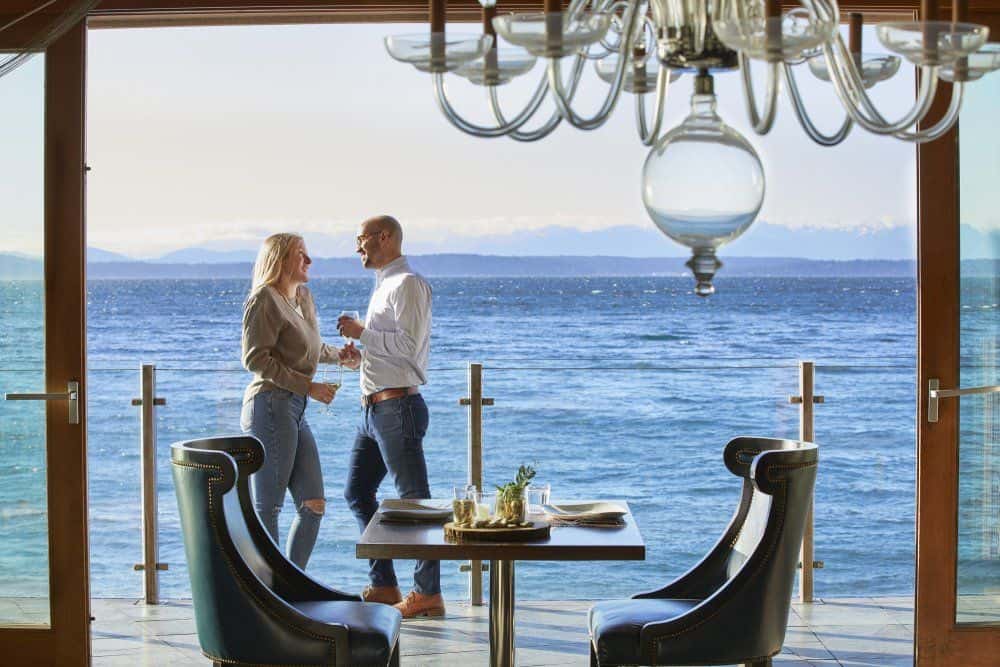